I grew up at a very favored time in the U. S. We had fought and won a war against “the Axis powers.” We had a nuclear monopoly in the world. We were the last undamaged economy in the world and we rampaged through the world’s other economies, bringing order (based on U. S. interests) and predictability (based on commitments we could enforce) everywhere we went. 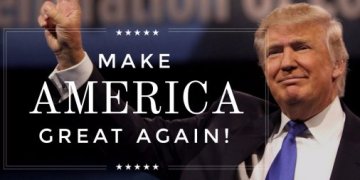 It is gone and it is not coming back. Politicians can promise that they will “fight for us,” and as long as we are feeling powerless to control our own economic destiny, that promise will be powerful. They are empty promises. We can no longer control our economic destiny and that is probably a good thing, however uncomfortable it makes us feel.

I want to reflect today on a New York Times article that is, in the narrow sense, “about” China’s domination of the solar panel market. Just a little more broadly, I would say it is really about economic nationalism, a “perversion of the market,” in which the state intervenes to shape the market in support of national goals. And finally, just a little more broadly than that, I would like to look at realistic American goals in a world economy in which China is the dominant power. [2]

Here are some reflections by Keith Bradsher’s Times article.

President Trump, who pressed President Xi Jinping of China on trade and other issues this week when they met at Mar-a-Lago in Palm Beach, Fla., has vowed to end what he calls China’s unfair business practices.

When I referred to politicians “promising to fight for us,” it is actions like this I had in mind, although Hillary’s rhetoric used the same emotional promises. What are we going to do, exactly, about “China’s unfair business practices?” There are no global economic institutions that can constrain China. Arguments made from classic market theories will not cause them to choose a lesser role than their resources could earn them. We are the coach yelling for a charging foul because we have found no way to keep the driver from free access to the basket. 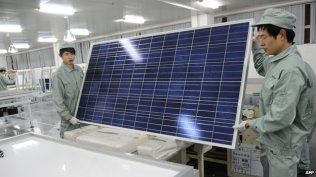 Consider what China has already done with solar panels. “China is now home,” Bradsher says, “to two thirds of the world’s solar production capacity.” That gets them a place at the table, wouldn’t you think? And, Bradsher continues, “because China also buys half of the world’s new solar panels, it now effectively controls the market.” I would think that would give them most of the other places at the table as well.

What does that mean for us? The Times piece chooses Russell Abney, of Perrysburg, Ohio as the poster boy for these effects. The Chinese government cut its subsidies to domestic buyers of solar panels; the manufactures cut their prices to compensate, and Mr. Abney is out of a job.

… Mr. Abney and about 450 other employees suddenly found themselves out of work. “Within just a few months, it all came crashing down,” Mr. Abney said. “It’s like a death in the family. People feel awkward talking about it.”

In Perrysburg, Mr. Abney lost his job at First Solar, the largest solar-panel manufacturer based in the United States, and looked in vain for a job in the auto industry in the Toledo area. He ended up taking a job three weeks ago at a building materials company in Lancaster, Pa.

That is a huge effect for a small market adjustment in China to have and it wasn’t just in the U. S. There were jobs lost in Germany as well. I think we have lost our sensitivity to this kind of effect because we have been more often the actor than the patient. [3] We are accustomed, in other words, to looking at a specific business decision we made—like China’s decision to cut subsidies to customers—and justifying it by the outcomes for us. We are looking now at that same decision being made by someone else, with unpredictable consequences for us, and no way to square it with our traditional notions of national autonomy.

The case for Chinese capacity in the new global market gets a great deal more extensive and I want to at least bow in that direction, but in dealing just with solar panels, I have laid the foundation for some questions about domestic politics in America. 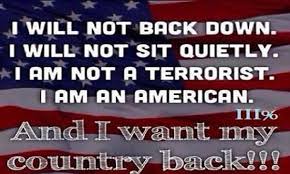 voters on the basis of what we will have to do to “govern ourselves once more” or to “take control of our own destiny” or even “to return America to the leadership we once had.” I haven’t even begun to cover the slogans, and in my list, I restricted myself to only positive images. If you include avoiding negative outcomes—like “Better Red than Dead”—you can make a much bigger list.

The globalists—whether progressive or conservative—are going to say that the world is a certain way and that pretending it is not is only prolonging a fantasy. We can be very successful niche players, these globalists will say, and make a lot of money and continue our tradition as an independent nation.  Or we can waste a lot of money trying to pretend that we dominate the economic and political systems the way we did after World War II—and fail anyway.

In Robert Reich’s excellent book Aftershock, he imagines that Margaret Jones wins the presidency in the 2020 election. [4] Here are a few elements of her platform:

Or, as President-elect Jones says as she hits the climax of her acceptance speech, “A nation of good jobs and good wages for anyone willing to work hard! Our nation! America for Americans!” (Thunderous applause).

President-elect Jones’s speech came to mind as I reviewed the coming conflict between the nationalists—like Margaret Jones and Donald Trump—and the globalists, like George H. W. Bush, Bill Clinton, George W. Bush, and Barack Obama. If the average per capita income in the United States continues to decline for middle class families, it is hard to see a globalist getting elected.  In the chart below, look at the trend lines below $50,000,

One more point about China.

But economists and business groups warn that China’s industrial ambitions have entered a new, far-reaching phase. With its deep government pockets, growing technical sophistication and a comprehensive plan to free itself from dependence on foreign companies, China aims to become dominant in industries of the future like renewable energy, big data and self-driving cars.

Solar panels are, in other words, China’s off-Broadway production. They have a model—I called it “economic nationalism” earlier—and the resources to put that model into operation in ways that far outstrip Japan’s efforts in the 1990s. With that much money and that much power and that many customers and that many producers, what global industry could they not dominate if they chose to? 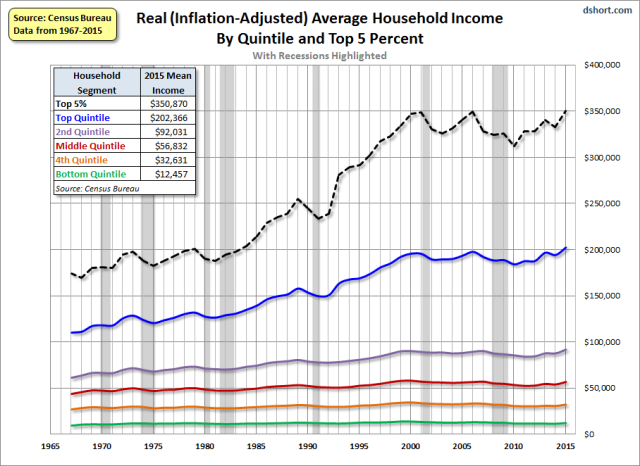 If this is the wave of the future, economically, how can the American voters prepare to vote their own economic self-interest in national elections? How can they learn to respond to the globalist message when there is no hope in it for them and no way back to American global dominance?

Can these Americans learn to prefer actual prosperity based on being a part of a well-functioning global system, to promises of a return to former glory? We didn’t in 2016. Maybe we will have another chance in 2020.

[1] And I’m not even considering the post-war social conservatism which was very favorable to men. I didn’t know at the time that I was living in a little androcentric bubble; I thought that’s just how things had always been.
[2] In choosing that focus, I am not saying that China now is that dominant power, but China is following the 1990s path used so successfully by Japan, except they are bringing a huge population and huge resource base to the project. If they can continue to buy off their internal dissenters, I don’t see what stands in their way. Certainly, it is not us.
[3[ I know that “patient” looks odd there, but I wanted to imply passivity and also to imply suffering and both of those words derive from a Latin verb meaning “to suffer.” So I am granting myself a little poetic license.
[4] The subtitle of Reich’s book is “The next economy and America’s future.” See page 79 for the platform of the “Independence Party.” Reich’s vision is so compelling that I forgive him for predicting it four years too late. In this fantasy, Jones defeats the Republican candidate, George P. Bush and the Democratic candidate Chelsea Clinton.