“It’s only natural” seems like an easy thing to say. I hear it a lot. Most of the time I attend only to what it does–it excuses things– rather than what it means.  Today, thanks to a comment by Scarlett Johansson, I would like to look at what it means.

You wouldn’t think it, but I am coming around to the idea that “only” is a very important word in this formulation. I think “only natural”  means “this is nothing more than natural;” no further explanation is required, because this event is “natural.”

I know that it means different things in different contexts. I have philosophical and psychological and theological  contexts in mind and I will look briefly at each. Well…not so briefly at the theological uses. It is a simple point—the Apostle Paul disagrees with Scarlett Johansson about what it means to call something “natural”—but it does take a little setting up, so the theological part will be the longest.

When Michael Pollan often begins his pitch with this snappy line:

(see pod with inhabitants) what he means by “food” is “something with ingredients your grandmother could pronounce.” He is opposing every instance of synthetically “enhanced” foods, foods that are stuffed with flavor enhancers and preservatives. It’s a readily identifiable meaning of “natural,” of course, the the prominence of the notion, the jihad-like dimensions [1] of the “natural food” movement are a reaction to the overwhelming artificiality of the American diet.

Here’s what started me down that road this time. It is part of a paragraph from the March 10 issue of The Week (see page 10).

“Johansson, 32, readily admits she now feels conflicted about the entire institution of marriage. “I think it’s a beautiful idea,” says Johansson. “I don’t think it is natural to be a monogamous person. It’s a lot of work. And the fact that it is so much work for so many people—for everyone—proves that it is not a natural thing.”

I’d have to say that I agree with Johansson about that. When I was getting to know Bette in 2005, quite some time before I actually proposed to her, I outlined a kind of marriage I was hoping to have. It was a kind that would take us both a lot of work to define and then ceaseless work—and ceaseless joy—to sustain. I wanted to be sure that when I asked her to say Yes to me, she knew that she was signing up to have a task as well as a partner in that task.

So I may know more about the “lot of work” part of monogamy than Johansson does. But I feel differently about whether it is “natural.” If I had a chance to talk to her, I would say that it is completely natural to say loving words to your wife when you are feeling loving. It isn’t any work at all. It is a good deal of work to say the things and do the things that will bring back the loving relationship after it has faded. And I would agree with her that such behavior, also, is not “natural.”

Tantrums are natural. Tit for tat is natural. Holding grievances is natural. Lashing out in anger is natural. Doing loving things at the time you feel loving is natural. None of those things builds the kind of marriage Johansson might have wanted and that Bette and I most certainly want. We don’t want a marriage that is “natural.” We want a marriage that goes way beyond natural and heads in the direction of wonderful and satisfying and nourishing to the soul. “Natural” pales by comparison to what you can have if you are willing to put in the work.

Political philosophers have divided sharply on what humankind must have been like “naturally.” Part of that question—it’s the part I am going to look at when things turn theological—is what is a human being like “naturally,” but these philosophers are thinking about groups of people; of societies. Rousseau famously said [2] “Man is born free yet everywhere he is in chains.” The bookend philosopher most often cited as “the other side,” Thomas Hobbes, characterized “natural life” more bleakly. In the absence of a powerful central government, Hobbes said, life is “solitary, nasty, poor, brutish, and short.”

I’m not really sure we can say, as a matter of careful secular [3] observation that humans “have” a nature at all. This whole matter of Hobbes v. Rousseau is replayed on a much smaller stage by psychologists.  On the one side, we have psychologists who describe people as having stable “traits;” and on the other hand, psychologists who think that other things, things outside us, determine what we think and how we feel and what we do.

The implications of the latter school are that people who come to awareness in societies that evoke good behaviors will be “good people” as that society defines “good.” Their goodness is “natural” because the society defines and rewards it. This seems very persuasive to me, but then again, the goodness is “in” the person/society interaction. It is not “in the person”—not a nature—and it is not “in the society.” [4] And besides, no behavior is “good” except in that time and place unless you bring some external standard to it and science can’t do that. And shouldn’t. [5]

And that brings us to theology. There is no reason for you to be surprised at that. For one thing, I have been hinting at it at every point along the way. For another, I have been calling for some external standard and saying that science cannot, by its nature, provide one. As an illustration, let me turn to another dispute that I know a little about. My tour of this new battlefield will not solve anything, surely, but it provides a really good illustration of why I pricked up my ears at Johansson’ comment that monogamy must not be natural because it is so much work.

I have in mind the distinctions made by Paul in his letter to the Romans and I am going to start off with the King James Version of the crucial texts. [6] Here is Paul’s argument in Romans 8: 4—8. 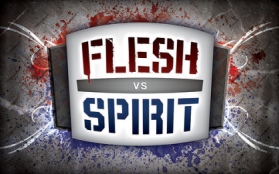 And, finally, “the carnal [of the flesh] mind is an enemy of God and cannot please God; the spiritual mind, on the other hand, is “life and peace.”

OK, the goal of that set of excerpts was to establish the consistent dichotomies that appear in Paul’s argument in Romans. There ought to be no controversy that in Paul’s mind, “the way of the flesh” is “natural.” The way of the Spirit is not natural; it is a gift that comes from a source to which we have no access on our own.

I want to finish with the question of whether work (Johansson) or “works” (Paul) is the way out of this dilemma, but before I do that, I want to look at another version of this text in Romans. This is the New Jerusalem Bible, my own favorite translation.

And finally, the outlook of “the disordered human nature” is opposed to God because those who live by their natural inclinations can never be pleasing to God. The Spirit (on the other hand) looks forward to life and peace.

We see again the consistent dichotomies, but they are now “disordered nature, the nature of disordered humans” on the one hand, and “living life under the direction of the Spirit of God,” on the other.

Our resident human nature—what is arguably “natural” about us, seduces us. “Seduce” is a word I love for its presuppositions and it is the perfect word for what Paul is talking about. We get the word from the Latin verb duco, which means, not surprisingly, “to lead.” [8] and the prefix se- means “away from.” So the world that “seduce” offers us is a world where there is a way we should go; there is a right way. But we are led “away from that way;” we say “led astray”sometimes and that is a very fitting way to use the word.

It is what is natural, as Paul sees it, which is the problem. Of course, monogamy was very important to Paul too. Paul would have agreed with Johansson that it is a lot of work, but would have disagreed with her that all that work it requires shows that it is unnatural. “Of course it is not natural,” Paul would say. “Death and destruction are natural. War with God is natural. Throwing aside what is natural so that we may begin to hear the kind of direction the Spirit is giving us is the only proper beginning point of “life and peace.” Or, as Paul normally says, the beginning point of the process culminating in our salvation.

So…I didn’t mean to put Scarlett Johansson up against the Apostle Paul as if they were antagonists in some commonly agreed upon debate. They are not. On the other hand, her way of characterizing what is “natural” is prominent in our time and Paul would reject it utterly. And I think that rejecting it utterly is a good way to begin.

[1] I ordinarily would have said “crusade-like” but if I’m going to use religious terms, I might just as well spread the backgrounds around a little. General Dwight Eisenhower wrote Crusade in Europe, for instance, about his experiences in the 1940s., but the same title could have been used by Abdul Rahman al Ghafiqi about his experiences in Europe in the 730s. He would no more have called his book Crusade in Europe than Eisenhower would have called his Jihad in Europe.
[2] Thomas Szaa begins his book, Ideology and Insanity: Essays on the Psychiatric Dehumanization of Man, with this paragraph. “Among the many foolish things Rousseau said, one of the most foolish and the most famous is :”Man is born free and yet everywhere he is in chains.” This high-flown phrase obscures the nature of freedom. For if freedom is the ability to make uncoerced choices, then man is born in chains. And the challenge of life is liberation.” That paragraph is one of the reasons I decided I wanted to become a political psychologist.
[3] Once you get outside of empiricism, you can specify a standard, a constant. If you do that, which is a notably unscientific thing to do, you can say whether humans “naturally” achieve this standard or not. “Good and evil” as ways of describing the fundamental nature of human beings can actually mean something if there is a standard.
[4] James C. Davies, whose work is the reason I chose the University of Oregon for my doctoral work, summarized all this as: B =f (p,e). He said that meant that behavior (B) is a function of the interaction of the person (p) and the environment (e). That is my view here.
[5] Science can specify what circumstances will cause people to say they are happy, for instance, but they cannot establish that happiness is the right thing to be. Science is a tool; it does not tell you what to use the tool for.
[6] It isn’t just that this language is so familiar. Nearly everyone my age who was raised in a Bible-reading culture was reading this particular version. It is also that the values posed seem so much more blatantly polar than the values described in the New Jerusalem Bible’s translation of these same texts.
[7] The capital S in “Spirit” always refers to “the Holy Spirit” in Paul’s writings. Paul is not making a distinction here between our bodies and our spirits or souls. For Paul, we are one psycho-spiritual unity. The split he makes is between ourselves, this psycho-spiritual unity, and the Holy Spirit, in other words, between humans and God.
[8] We get the title, Duke, from the same source.