The Season of Valentine’s Day

Bette seems never to have cared about Valentine’s Day one way or the other. I always did: I hated it. As an elementary school child, I ran into the “valentines for everyone in the class” rule. Hated it! Why would I send a valentine to Bumpy Gray [1] and if I did, what would it say?

I don’t remember the Valentine scuffles in my first marriage. I suspect there were some because I learned with great relief that my second wife didn’t care about Valentine’s Day one way or the other. I took that as an opportunity to put the practice behind me and very likely railed against “Hallmark Holidays” invented for the sole purpose of selling cards.

I met Bette late in January, twelve Januaries ago. [2] And Valentines Day was upon me before I could devise a strategy for it.

This was a whole new thing for me. I was completely smitten and was rooting around for occasions that would allow me to say something that I very much wanted to say. This wasn’t being fastened upon me, as in grade school, or a matter of mutual disinterest, as with my second wife. No, this was me looking for an occasion and seizing on Valentine’s Day as an excuse. That changed my attitude toward it entirely. {The picture is from the right era, at least. In it, we are celebrating Bette’s alma mater, (North Dakota State) which is represented by the same colors as my alma mater (the University of Oregon.)

Besides that, I got from Bette that Valentine’s Day a much-treasured confirmation that this lady was something special. I showed up at the door of her condo prepared for courtship. I had arranged four kinds of flour—I did quite a bit of baking back in those days—in plastic bags and I gave them to her as we stood there at the door. I said that I didn’t know her well enough to know what her favorite flowers were (implying that I would have bought them if I had known), so instead, I brought these (handing them to her) because they are my favorite flours.

She was very gracious about receiving the flours from me. We chatted for a little while in the kitchen until I thought I had been there long enough. But when I started to leave, she said, “Thank you for the flours” in the tone and with the look of a woman who has just been given a dozen perfect roses, which happened to be her favorite flower. That look. That tone.  It was wonderful!

I really liked that and Bette and I have celebrated Valentine’s Day in a big way ever since. I have decided that her willingness to marry me ought not to mean that I stop courting her. She is willing to continue to be courted, particularly during what I have come to think of as “the Valentine’s Day season.” So it works out really well.

This year, Starbucks is featuring a shortbread cookie as a valentine. It has the stereotypical “heart” shape and a truly cryptic message on it. It says XO OX, as you can plainly see. I’ve worked a little on cracking the code this year and I want to tell you what I have discovered. 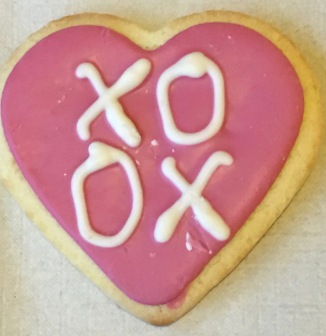 As I see it, it means “bovine barbecue.” I’m not entirely sure why that is specially appropriate for Valentine’s Day, particularly because you don’t get to be an ox without parting with a precious part of your anatomy. You can be Presbyterian without that, I am glad to say, an allusion that will be explored in just a moment.

Looking first at XO. The only language I have found in which this is actually a word is Chinese. Xo is a spicy seafood sauce originating in Hong Kong. Why you would want to put that on the flesh of an ox is puzzling, of course, but then naming a celebration of courtly love after a priest [3] isn’t all that straightforward either. And if you call beef with barbecue sauce on it “barbecued beef,” then Xo Ox is perfectly understandable.

You may have thought that the reference to Presbyterians was casual, but it was not. Etymology comes once again to the rescue. Presbyterianism is a form of church governance characterized by rule by “elders.” The Greek presbyteros is not very far away; it means “elder.” But why does it mean “elder?” The prefix pre- meaning “before” is not a puzzle. That leaves us only -buteros, from the root bous, meaning “ox.” There was, according to one of the accounts I read, a favored position saved for an old man, leading the ox to the place where the ox would be sacrificed. [4] So it is the combination “the old man in the front with the ox” that gives us presbyteros and prestyteros that gives us Presbyterianism, the rule of the church by such elders.

So much for meaning. There remains the question of just why XO has come to mean

“hugs and kisses.” First, it ought to mean “kisses and hugs” because the X is the symbol that is supposed to refer to osculation. Still, we make do with the language as we find it.

As to just why the X symbol means what it is supposed to mean and the O what it is supposed to mean, I recommend a bouquet of speculations collected and arranged by Deborah Honeycutt at Today I Found Out. Some of the explanations have to do with Tic-Tac-Toe; some with X as a lingering symbol for Christ; some with the purported practice of Jewish immigrants “signing” with an O because they didn’t want to sign with “a Christian symbol.” [5]

So this “Valentine’s Day season,” there is a great deal to think about. I have, I am delighted to say, a wife who still likes to be courted. There is the whole season of Valentine’s Day which provides a context that otherwise I would have to invent. And there are cards which say little fragments (each) of the things I would like to say to Bette in the Valentine’s Day season. Some are a little goofy; some are sweet; some are sexy. Some are borrowed from other occasions; if I like the picture enough, I just change the message.

So much to do. So little time.

[1] I actually did have a classmate named Bumpy Gray. I didn’t find out his name was Paul until a substitute teacher called the roll one time. We all said, “Who?”
[2] We just celebrated the 12th anniversary of our first date. At Starbucks. I had learned in six months of dating that “coffee” is a god amount of time for a first date because you never know how it is going to turn out.
[3] One of the plausible actual Valentines who might have been associated with sainthood was a Roman Catholic priest, who presumably would have been celibate. I understand that there were exceptions, but the combination of a non-participating priest and a castrated bovine in the celebration of romantic love is just too much to pass up.

[4] Partridge in his Origins: A Short Etymological Dictionary of Modern English says originally meant “(an ox) leading the way.” Barnhart, in The Barnhard Dictionary of Etymology thinks it might refer to an old man (presbyteros is the comparative form of presbys, meaning “old”) who leads a herd of cattle.
[5] In the middle of this explanation, I learned that kike, a derogatory term referring to Jews, comes from kikel, the Yiddish word meaning “circle.” And if it is true that Jewish immigrants signed with a circle while other immigrants signed with an X, that would actually make sense.