Two Cheers for Kristof and Keller

Only two, though.  I am saving the last one for a better resolution of the dilemma.

I want to think this morning about Nicholas Kristof’s column in the New York Times, which you can see here.  (For reasons I don’t pretend to understand, the hyperlink is below on the word “of.”)

And I want to start with three comments. First, I am grateful to Nicholas Kristof for asking the question, Timothy Keller for providing some answers, and to the New York Times for publishing it on the front page—of the electronic version, at least— two days before Christmas. Thanks to all.

Second, I am probably not an evangelical myself. My friend, Bill Teague, of Langhorne Presbyterian Church in Pennsylvania, says that I am. I think he’s just being gracious. He is an evangelical himself and we have had delightful talks over the last thirty years or so and I think he wants to offer that status to me as a gift. But even Bill says that I am a “minimalist evangelical.”

Finally, when my father taught me how to drive a car (an old stick shift pickup truck), he said, “OK. Now you are not going to be completely satisfied with the way anyone else drives.” And as in many other things, he was right. Once you know how you would do it, the way anyone else does it doesn’t seem quite right.

Like Tim Keller, I have had this conversation a lot of times. Nearly always, I walked away from the conversation still friends, as I am sure Keller and Kristof are. I count that a good thing, although it is not the only good thing. And because I have “learned to drive” in this conversation, I am not entirely happy with the way Keller drives. I’m not really critical of him. I just know that I do it differently.

For instance, Keller winds up making two points about orthodox Christian beliefs. One is 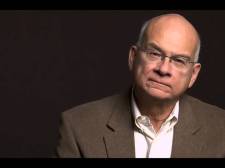 that you have to have them. The other is that some doctrines that seem fully dispensable to me, seem crucially important to him.

As to the first, I would be really wary of identifying the holding of a particular set of beliefs as “being a Christian.” Especially in a country whose history has been predominantly Christian. Are we really saved by what we believe? Really? Not through relationship with the God whose character and intentions we understand through the life and ministry of Jesus? Really?

It is to take care of difficulties like this that I have come to identify the whole corpus of Christian beliefs as “Christianity.” Christianity is, in that sense, like Pythagorean geometry. It starts from the premises and proceeds through logic and evidence to answers to a whole bunch of questions of application. But if I misunderstand one of the premises or if I lose my way in reasoning myself from one conclusion to another, what happens? If Christianity is a “discipline” like geometry, I have failed. If it is a relationship with God, understood in the light of Jesus, the relationship doesn’t go away. What parent among us can imagine that only the child who is perfectly in line with our expectations is going to be welcomed home?  And faith is, as in the picture, a kind of trust.

So I see the business of “being a Christian” not as Keller sees it—believing in the crucial doctrines—but as a relationship that will survive substantial degrees of heresy.  The church could not, but a Christian could. 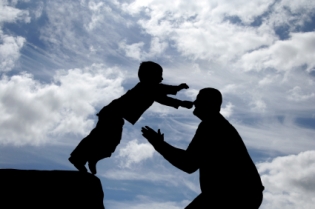 Then there is the question of what doctrines are really crucial. The virgin birth? Really? Keller bases his argument on the idea that if there really is a God, we have no idea at all what He is capable of. [1] Keller is right about that. We cannot know. On the other hand, we don’t need to know.

It is true that many New Testament works present Jesus as “without spot or blemish,” but it is also true that these presuppose the Jewish sacrificial system in which the purity of the sacrifice is crucial. The church has taught at times that Jesus saves because of the good example he was. Some have said that whatever his life and death were about, they did nonetheless produce a historical community bound by love and committed to obedient sacrificial living within God’s (renewed) Covenant. I think of “sacrificial atonement” as a metaphor. There are lots of metaphors. And many of them have no need at all of the virginal conception of Jesus. [2]

So my argument with Keller is that the virginal conception is not a crucial part of the body of Christian doctrine as I imagine it. I wouldn’t say that about the resurrection of Jesus, however, and that puts me right back in the “miracles in modern times” soup along with Keller.

What I can say confidently is what Keller says: something happened. After Jesus’s death, something happened to his followers—and not to anyone else—that turned them from from losers hiding in spare rooms to dynamic evangelists moving the crowds and daring the authorities to stop them. What did that?

I don’t know. The several New Testament witnesses don’t have the same notion of what

happened or, indeed, of what “resurrection” means. You can say that Jesus acquired “a spiritual body,” but no one knows what that means. You can say he went to “heaven,” if you want to hang onto the geocentric picture of the universe which was common coinage in the time the gospels were written. You can wear yourself out on what the resurrection “was.” I wish you well. My interest is in what the resurrection “means.” It means—the witness of all New Testament writers supports this—that the life of Jesus, which was understood at the time to have ended in defeat, actually ended in triumph. God raised up this Jesus whom you crucified. (See Acts 2:36 for a concise formulation). That is what it “means.”  (Skepticism is still, as you see in this picture, an aspect of a relationship, just as faith is.)

But, to tie these two ideas together and get off the stage before the audience starts throwing fruit, let’s say I can’t find my way to believing that Jesus was resurrected and let’s say that his resurrection is logically crucial to the integrity of the whole argument. Is God going to reject me because I continued to believe in Him and His son and His work although by rationale was faulty? Really?

I don’t think so. If I thought there was a heaven and if I thought I would meet God there, I could imagine Him taking me by the hand and showing me where I screwed up—how, once I put this piece back into my doctrinal armory, the resurrection would be necessary and would make perfect sense. But, in this little fantasy, God did not damn me because of the mistake I made.

I would have been prodigal in my thinking, but still, I would be His son.

[1] Sorry about the pronoun. I don’t believe God can be meaningfully thought of as having a gender. I just like to stay as far away as I can from any sentence that will require me to say “Godself.”
[2] Joseph Fitzmyer and Raymond Brown, both Roman Catholic priests, argue with each other as scholars and friends about whether Luke really has a doctrine of the virgin birth. Fitzmyer says no on textual grounds; Brown says yes on the grounds of literary format.