Yesterday when it is past

Today I would like to tell you about some surprises I have encountered in moving from one kind of life to another. That sounds more momentous that it would really need to but I am going to start with a passage from the Psalms and I thought that sentence could afford a little extra gravity. Here’s the passage (in the King James, which I nearly always like best for psalms).

Psalm 90:4 For a thousand years in thy sight are but as yesterday when it is past,and as a watch in the night.

That verse kept coming back to me as I was writing the first draft of this essay and now I think I know why. Look at the expression “yesterday when it is past.” As I am considering it in the light of today’s reflection, I note that “yesterday while it is still happening” is going to look and feel very different.

So from my standpoint, “today,” I look back and reflect on yesterday and I know that the reflection is distorted. “Yesterday when it is past” seems like a blip. While it was happening, it felt like a parade. There is no value at all in asking which it “really was.” This is a distinction that bears entirely on how it seemed. “Yesterday when it is past” is a beautiful and engaging way of saying “brief.”
I turn now to the new life/old life distinction. Briefly, after living in the same house on the west side of Portland for a very long time, Bette and I moved to a retirement center on the east side of Portland. [1] Part of the newness is living in a very attractive and welcoming retirement center rather than in an attractive and welcoming neighborhood. But another part is that all the things that are really familiar to us are now “over there” and we have to go to them.

We had a really good life on the west side and have begun a really good life here on the east side, so the natural question is how to go about keeping the best of the old and adding to it the best of the new. I’ve been turning this over in my mind for the last several years—what Bette calls “hyperprocessing” and I call “being intentional”—and I had the general outlines of a strategy in mind.

If it is true, however, that there is a distortion of “how things seem” depending on where in time you are standing—“yesterday when it is past”—then all that planning is going to produce more surprises that accurate predictions. And it has.

the whole “old life” construct. My practice used to be to hit Starbucks twice each morning. I would drive over around 5:30 or 6:00. I’d get coffee for Bette and me and come home to write things like this. Then I would walk over (about a mile) intending to get there about 7:30 for the meeting of “the Northwest Corner Caucus.” [2] And then the other caucus participants and I would do whatever happened that morning.

It was a really good experience and I had no intention of giving it up just because I had moved across the river and Bette and I were down to one car. There are perfectly good public transit alternatives and I practiced them just to be sure. So I announced that my plan was to be there at the regular time on Tuesdays, Thursdays, and Saturdays. I was counting on being there predictably as an adequate substitute for being there all the time.

The caucus still meets and I still get there at 7:30 on the appointed days and I still like everyone just as I did before and they still like me just as they did before. But I am a guest now. My many years at that Starbucks—and the Hillsdale Starbucks, a mile to the east, before that—are like “yesterday when it is past.” The distortion that distinguishes “today while I am experiencing it” from “tomorrow as I am imagining it” fooled me. When you get to tomorrow, you discover that yesterday looks different than it did when you were living it.

Then I started thinking about the mechanism by which that shift occurs. That second thought—how does that happen?—follows almost immediately after “what just happened?” for me. [3] And then, following a feeling more than a memory, I went back to the breakup with my very first girlfriend.  This is not that girlfriend, but that girlfriend was, in fact, a redhead as is my current…um…girlfriend.

I was a senior in high school. She was kind of a “practice girl friend” for me and I was a practice boy friend for her. It was a new and exciting kind of relationship but as the school year was winding down, we both looked at the relationship and realized it wasn’t going anywhere. It was a generous and thoughtful and collegial decision and we were both satisfied with it.

There was one small problem. This was a very small school—an academy in rural Pennsylvania— and “who was going with whom” and particularly “who was breaking up with whom” were really big topics. My girl friend and I agreed that we would save ourselves a lot of grief if we would just pretend to continue being boyfriend and girlfriend for the remaining two weeks of school. What would be so hard about that?

In that experience, I learned something I would never have suspected. The excitement in a romance comes from where you think it is going. You “borrow” a lot of the emotion from things you think are going to happen or that might happen in your common future. Events are not merely pleasant, but also significant. They “foretell the future” in a hamhanded sort of way. And when you know there is not going to be a common future, the air just leaks out of the balloon.

Now, I do not have any girlfriends west of the river. I brought the only girlfriend I have with me to the east side. But I have a lot of friends over there and being with them has reminded me of my first girlfriend and the fading of a relationship with no future. If it is really true, as I learned in high school, that what we call “the experience of a relationship” is in fact part experience and part expectation, then I should have imagined that when you remove the expectation part, the experience part would start to lose its color and snap. [4]

Is it something like an aura of engagement that stays bright when you know you are going to keep on seeing someone and keep on valuing them; and then that starts to dim when you don’t see them as often? Is it something like investing in a fund and drawing from it what you need and then, later, just drawing from it. The opportunities for investment are only occasional and continuing to draw from the fund now shrinks it? Is it like that?

On the other hand, some such mechanism works in the other direction here. Every new part of the life here I try out—I went swimming at 4:00 a.m. a week or so ago—could be the beginning of “a practice.” Every new acquaintance could be the beginning of a friendship. Each new setting that seems to invite one sort of behavior but that also undercuts it, it a delicious new dilemma to consider.

Over here is not “yesterday when it has passed;” it is “tomorrow as I prepare for it.” Is that a distortion? Yup. No one anticipates or remembers without distortion. No one. But I think this distortion is going to be working in my favor. That’s how I feel about it today and, more important, that what I think really ought to happen.

It’s the way the machinery works.

[1] Long before I ever lived in Portland, I learned about the east side/west side 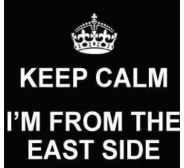 distinction from a Portland guide book. It opened with a completely straight-faced joke about a man who came to Portland and got a job and worked hard and saved his money and eventually was able to move to the west side. He married and started a family and then began again to save money so he “could bring his mother across.” First I said, they didn’t really mean that and I read it again. I decided that was exactly what they meant. Then I said, “Ooooh. I want to live in a city that thinks that is as funny as I do.”
[2] Imagine “the caucus” as a pool of people, some of whom will show up on a given morning with the expectation that we will talk about whatever is on our minds—some collection of personal tidbits and public issues—and practice “civil discourse.” Just how we arrived at the practices of what we call “civil discourse” is another story.
[3] Some say it is a character flaw; I say it is my graduate training.
[4] Of course, over here the machinery works just the other way around. A conversation I just had here on my front porch was pleasant enough, but it also laid down markers for other things that might be important in the future. This conversation carried significance. Significance of what, exactly, I don’t know yet, but I am hot on the trail.