I’ve been in a lot of conversations lately that have to do with death and afterwards. And yesterday, Bette and I met with an “estate planner,” hoping to find a way to leave our property as gently as we hope to leave our lives and our communities. [1]

The planner sent us home with a pamphlet called “My Going Home Plan.” It’s a very useful pamphlet. It deals with writing obituaries and making sure someone knows where your spare change is kept and all that. It’s the title that bothered me, not the pamphlet. “Going Home?” Really?

Let’s start with the language side, just to start somewhere easy. When I was young, the expression I remember being used to refer to someone’s having died is, “Mabel (or someone) died last night.” Then I started to hear that Mabel has “passed on.” And later that Mabel, well shoot, let’s make this Mabel’s daughter, Henrietta, just to suggest the passage of time, had “passed away.” That caught my ear right away because the “on” in “passed on” presupposes that Mabel has gone from one place, here, to another place, there. [2] The “away” in “passed away” makes no such assumptions. We know she was here and now she is not, so we may say she has gone away. “Here” is the place we know; “away”is the place we do not know.

Most recently, the formula I hear is “passed,” which, although it suffers a lack of specificity, does avoid the on/away problem.

That brings us to the question of the title again—going home—and how to conceive of “home.” What do we mean by it? John Denver describes a young man, in his Rocky Mountain High, as “comin’ home to a place he’d never been before.” That’s an entirely emotional rendering of “home.” I have no objection to it if the question is “where do you feel most at home.”

“Home” is a much-valued word, for sure. That is why people who build houses like to be called “home builders,” as if it became a home when someone started living there. It doesn’t. The people who actually build homes are the people who build belonging and acceptance in that house. The home is where those relationships begin to be presupposed, to be “the way we do things here.” The home is not the house any more than the building is the church.

I’d go more with Billy Joel, You’re My Home. It is wildly romantic, of course, but it does locate the “home” in the relationship and not in the place and I think that’s worth doing. Here’s the line. Billy Joel says, “Well, I never had a place I could call my very own/But that’s all right my love, ‘cause you’re my home.” I have some problems with that, too. I think it is asking a romantic relationship to carry a lot of weight, if the relationship is only romantic. If it is covenantal—solemn promises are exchanged— in addition to being romantic, it’s not so bad.

So we are considering “going home” as if home were a place or as if it were a relationship. Both plausible. I prefer the latter.

When the conversation turns theological, which I am pretty sure was in the mind of 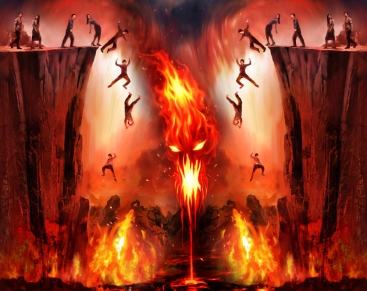 whoever titled our pamphlet, “Going Home….” then we have another set of questions to ask. If “home” is “where I belong,” as in the John Denver imagery, what if the home where I belong is hideously bad? Let’s start on the wrong side of the tracks for once. Tell me what this means. This is Matthew 25:41: “Go away from me…to the eternal fire prepared for the devil and his angels.”

Here is what it means to me so far as it bears on our question of where “home” is. This passage says that there is a place where the devil is and where the angels on the devil’s side are. It is their “home” in the sense that is the place they belong. You who failed in compassion—that’s who is being addressed in the imperative verb “Go…”—have shown yourselves to be on the devil’s side as well, so it is your “home” too. So that’s the devil, the devil’s angels, and you, you hardhearted SOB.

It does stretch it just a little to call Hell a home, but in this context, I am willing to make the stretch. [3] To these, the un-compassionate, the Son of man says, “Go home.” But to the compassionate, he says, “Come home.” That means “Come to where I am” and it implies belonging and acceptance just as the other “home” implies rejection and torment. Both are “homes” in the very limited sense that it is where I belong or, in the case of Hell, where I demand to be.

But this brings us back to choosing between John Denver’s notion that home is a place and Billy Joel’s notion that home is a relationship. I’d have to say that I’m with Billy on that one. If by “going home,” the writer of the pamphlet means “heaven,” then I see him coming down on the “place” side of the answer. I do think that is what he means. I don’t think of it as a place and I don’t think we are required to. Further, I think there are some substantial dangers in that.

What dangers? One of the very few categories of Christians for whom my father allowed himself to express unmitigated scorn is a group I came to call heaven-mongers. Their operating principle, according to Dad, was “How little can I do and still get to heaven?” Heaven is the goal in this formulation. God is something like an inspector or a ticket taker; maybe border patrol. You have to get past God, in this formulation, to get what you really want, which is heaven. Note that it is not God that you really want. This is awkward, to say the least, because you are what God really wants as we shall see.

When you give up heaven as a destination and come over to my side, which is that it is a

relationship; it is “being in relationship with God,” (whatever that means) that is the goal. [4] God created us for relationship with Himself. We chose to trust our own judgment rather than to obey God and so set ourselves up as an alternative form of life. We called it “autonomy,” not understanding that it was, in fact, rebellion. That’s the story of our separation from God as the book of Genesis gives it. God has continued to pursue us, to court us; refusing to take NO as an answer because God knows what NO means, and God knows that we do not. So we continue to have opportunities to say YES; we may still choose a relationship of love and trust and obedience, which are the the meaning of “heaven” that is based on relationship.

According to some New Testament understandings, John’s particularly, we do now have the relationship with God that can be characterized as “eternal life.” We are living in “eternity” right now. One way of understanding “eternal” life is that it is temporal life extended forever. Another way is that it is the significance of life—you might call in the enduring meaning—that is important, then it is the kind of life (not the extent) that is eternal.[5]

So this isn’t anything like a “place” we want to go. It is a kind of life we have been given as a gift. We live in that life now and will continue to live in it so long as God chooses and in whatever way is appropriate. There is no reason, so far as this notion is concerned, that the physical death which occurs somewhere in the middle of that development will alter the relationship in any significant way. The biggest part of that relationship continues as before.

I have no idea how that works. I am describing the relationship, as I understand it, between expressions like “the life of the ages,” on the one hand, and ordinary human mortality on the other. That brings us back to the “now and then” question.

I don’t have much confidence that there is a “then.” The Israelites decisively rejected the idea of a life after this one as a result of their contact with Egyptian religion and they continued to reject it until they were conquered. They got interested in it again as a result of their sojourn in Babylon. One of the advantages of my understanding that it is the relationship, not the place, that is of everlasting significance, is that it reduces the question of “there” (as opposed to here) and the question of “then” (as opposed to now) to very nearly nothing.

So I want to fill out my “going home plan.” It’s a good thing that I can do for my family. But to the best of my understanding, I am now living in an active relationship of love and trust which, in itself, constitutes “home.”

I am home. I don’t have to go anywhere to be there.

[1] We don’t have anything that ought to be called “an estate” in any but the most formal senses. On the other hand, anything out of our family histories can be a source of contention and reducing those sources seems like a good idea.
[2] The angel (Matthew 28) told the disciples that Jesus had “gone on ahead of you to Galilee” but could just as well have said “passed on ahead of you.” Both formulas require that there be a here and a there.
[3] C. S. Lewis does it much better in The Great Divorce, where Hell is a vast grey city of unreality People who are unable to choose Heaven, even being confronted by it and being invited to stay, go “home” to Hell.
[4] I know that is not well formulated. People who continue to say NO to God’s courtship are also in a relationship with God. They are in rebellion; they are antagonists. Those are “relationships” too. It seems to me that orthodox constructions of the Christian faith require that everything is “in relationship” to God. Still, the common meaning of the phrase connotes “a positive relationship with God,” and that is how I intend it.
[5] The Greek is zōēn aiōnion.  People who know more Greek that I do say that can be translated  metaphorically as “eternal life” or literally as “the life of the ages.” It is the notion of “the life of the ages” that I have takes to mean “the kind of life that really matters” or “meaningful.”