I have seen the movie Concussion three times now. [1] And I have read the book twice. So I think it would be fair to say that I am a fan. I tend to talk about movies that I liked particularly and part of that conversation, as a rule, is, “What is it about?”

Easy to ask; hard to answer. Ordinarily, I respond by giving a buffet of things different viewers might think it is about. It is abo 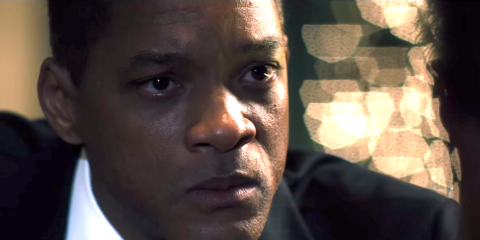 ut the NFL’s suppression of information about concussions. It is about capitalism and its disregard for the costs incurred by the workers. [2] It is about the aspirations of a young Nigerian doctor to continue to be Nigerian (Igbo, really) while becoming American. It is about the courage of a public servant enduring physical harassment and retaliation by his professional colleagues and vulnerability to punishment by the law—and still continuing to offer his adopted homeland the gift he has to offer.

Those are all good answers, but none of them is my answer. I went back to see it again to watch Dr. Bennet Omalu grow. But before I get into that, I have to say that watching Will Smith play Dr. Omalu lets us see the character grow in the way the real Dr. Omalu grew. Will Smith is absolutely wonderful. This is the best work of his career, it seems to me. [3] 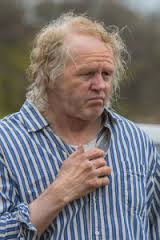 Let’s pick up Dr. Omalu at the point where he “meets”—that’s Omalu’s word—Mike Webster. They wheel the body of Hall of Fame Steeler Center Mike Webster into the autopsy room for Omalu to examine. Everyone but Omalu is very conscious of the honor that is being bestowed upon them. Why is Omalu not conscious of it? Well, he has never heard of Mike Webster. Or the NFL Hall of Fame. He doesn’t know what a “center” is. He doesn’t even know what a Steeler is. In Allegheny County, Pennsylvania!

Omalu is thorough. He’s a neurologist and he knows his stuff. But he also believes that “Mike Webster” is still present to him in some way and he wants to learn from Mike, not just from Mike’s body. As part of that thoroughness—paying attention to Webster’s life as well as his death—Omalu discovers the tau tangles in the brain. These are the mind-strangling tangles familiar to anyone who has looked at the brains of old people with Alzheimer’s disease. Webster was 50 years old and had the body of an athlete.

Omalu and some of his colleagues discover Chronic Traumatic Encephalopathy (CTE), the name they give to these Alzheimer-like symptoms which are caused by concussions. Omalu is a doctor and he sees the explanation he has discovered as the kind of thing that will lead to treatment. Mike Webster is not a “center” to Omalu; he is a patient. He knows that future Mike Websters can be forewarned, at least, of the danger. Maybe something can be devised to recognize concussions more quickly and to treat them with more respect; maybe the rules can be changed to lessen the carnage. 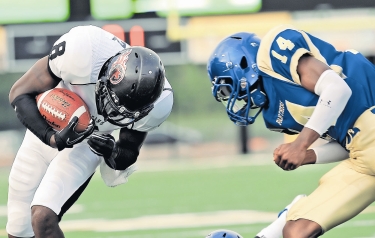 But the NFL doesn’t look at things the way Omalu does. Football is a business and massive financial liabilities are bad for business. No one in the NFL, back in those days, talked about “helmet to helmet contact;” they knew that the violence of the collisions was a major selling point for audiences. Those were the days when the violent hits of a safety on receivers and ball carriers earned him the admiring title, “The Assassin.” And Omalu wouldn’t shut up about CTE, so the NFL declared war on Bennet Omalu. [4] Shortly thereafter, Bennet Omalu declared war on the NFL.

The war goes on. A lot of the middle part of the film is about that war. But none of that part of the plot has anything to do with Omalu’s not knowing what a Steeler is or a center—or, as in the case of Jack “The Assassin” Tatum, a safety. [5] The plot that took me back to see the movie again begins when he meets Mike Webster and culminates in his address to the NFLPA—the players’ association. Omalu stands up in front, behind the podium, addressing the men who give and receive concussions for a living.

He begins by saying:

My wife watches the games. She jumps up and down. Through her eyes, I can see the beauty of the game. The grace. The power.

That is where Dr. Bennet Omalu has gotten to. It is an amazing journey. And because he did get there, he can say the other things he has to say:

Forgive them. Forgive yourselves. Be at peace.

The movie I went back to see again ends there. [6]

[1] I count it as seeing it twice when I see it with Bette because she sees so many things I miss and, for the relatively small price of a dinner afterwards, she is willing to tell me what I missed. Nicely.
[2] Dr. Cyril Wecht uses the marvelously apt analogy of getting a race car back on the track. That is the kind of “examination” a concussed player gets, says Wecht. How fast can we, the pit crew, get this player (car) back into the game (onto the track). Exactly.
[3] Not to disparage his role as the anti-technology hardass cop Del Spooner in I, Robot. I liked that one too.
[4] “You’re going to war with a corporation that owns a day of the week,” says Cyril Wecht, trying to give Omalu some idea of what he is taking on, “one the church used to own.” Omalu proceeds anyway. We learn from Omalu’s wife that his surname—the longer version from which Omalu is derived—is Onyemalukwube. It means, “If you know, come forth and speak.”
5] You can see the irony, in this context, of the name “safety” as the name of a position. A safety is supposed to make you “safe” from being scored on by the other team. Tatum’s violence made everyone on the other team less safe and therefore made his team more safe, but only from being scored on. Professional football is notorious for its payback norms, so it is entirely possible that Tatum’s teammates were also less safe because of his play. But his team—the team, not the players—was more safe.
[6] Not quite there. Later, Dr. Omalu is offered a position with the U. S. government—a position described as “the medical examiner of the United States.” In the movie, he is offered this job by a very masculine, very handsome bureaucrat. The bureaucrat begins by saying, “Dr. Omalu. We know what you have done. You are a true American.”