I’m going to approach this whole thing as a conspiracy.  I don’t think it is, except in the sense that all cultures are conspiracies—but I have a rant in mind and calling it a conspiracy will make it easier.  Jesus told a story that I call “the canny steward.”  Everyone else I know and every Bible I remember seeing calls it “the unjust steward.”  It’s just so wrong. 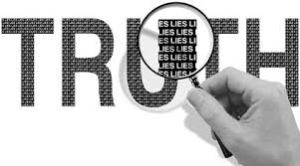 I don’t remember when they began interrupting the biblical narratives to put little names in.  The Bible I had as a little boy didn’t have it.  These are like headlines in a newspaper.  My conspiracy is going to involve the writers of these little biblical headlines.  At the meeting where they decided to do this, the convener of the meeting—this fictional person’s name is Albert Nudge—said, “I’ve called you here to discuss my idea.  I think we should give names to discrete bits of biblical narrative so people will know what they are reading.”

Bob Drudge has an objection.  “But…don’t they already know what a story is about?  And if they don’t, wouldn’t it be better for them to decide what it is about after reading it?”

Cynthia Fudge has a more technical orientation.  “But,” she says, “Can we really say that a story is ‘about’ one thing?  What if it is an allegory and there are as many meanings as there are characters?”  You see what I mean about Cynthia.

Albert has been thinking about that for a while and he is ready.  Besides, his real last name is Zimmerman.  “Nudge” is just a nickname. [1]

“Oh,” he says, “You are missing the point.  If we give it “a title,” then it will have “a point.”  And.  Wait for it. The point it has is the one toward which we have nudged them with our title.”

I’m disappointed in the lot of you, really.  Remember back when there was such a demand to translate the Bible out of Latin and into a language people could read for themselves?  The people who were opposed to that said, “No!  If you let hoi polloi read it,[2] they will misunderstand it!”  But people don’t like to be told that they aren’t allowed to read something, so a huge demand arose and this Luther guy translated it out of the Latin in which it was originally written[3] and then everybody could read it and they came to a lot of different conclusions about it.  Some were just wrong, but some were really inconvenient.”

“So here’s the thing.  Here’s why I have called you all together into this conspiracy.[4] We don’t deny ANYONE the right to read the Bible on his or her own.  We don’t give anyone an authoritative understanding of what a given story means.  We just insert a little headline that guides their minds in one direction rather than another.  Don’t you agree that some directions are better than others?”

The others agreed, I suppose.  Or complied.  Or were just nudged in the right direction.  Because there started being Bibles with little headlines announcing what the meaning of the next section was going to be.  And that brings us back to the Canny Steward.

Check it out for yourself.  Luke 16.  There’s this guy who is the CFO of a rural 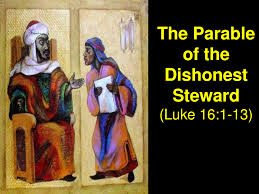 corporation.  He’s been dipping into the till or letting weeds grow in the garden or something.  In any case, he knows he’s going to get fired.  So he gives sober forethought to “his next stop.”  A manual laborer?  Nope, not strong enough.  A beggar?  Nope, too proud.  Ah, but if he were a local celebrity, a person everyone owed a favor to, things could be pretty good.  And he has, at the moment, a way to make everyone indebted to himself.  It isn’t honest, of course, but it shows real insight.  He cuts the amount of money or produce each tradesman owes the corporation.  The corporation loses all that money, but the steward doesn’t care.  Every tradesman looks on the steward as a benefactor and his future—his “next life,” so to speak, is taken care of.

That’s the story.  We could haggle over what it is “about,” but Jesus told it (verse 9) to illustrate the point that using the resources you have in this life so they will have value in the next life is not a stupid thing to do.  It was the steward’s canniness in the use of resources, in other words, rather than the way he cheated his master, that was at the center of the story.  Why anyone would want to invert those two is a source of some puzzlement to me, which is why it is so easy to imagine conspiracies. “I know!” the headline writer said, “Let’s say that the story is about misfeasance in office.  We are having a lot of trouble with that these days.”

There is a story popularly called “the prodigal son.”  Luke 15.  There is a son who abused his father in a lot of ways, of which spending his pre-inheritance quickly and badly is one of the least bad.  But there is a marvelous father, who buffers the son’s re-entry into the village and who greets him warmly.  And there is an elder brother who has labored for his father in quiet resentment for years (how prodigal is that?) and who wants nothing to do with his disgraceful brother.  The contrast of the father’s attitude–God’s attitude by analogy, and the brother’s attitude—Israel’s attitude by analogy is the most prominent part of the story.  (I had to do a lot of looking to even FIND a picture that had the elder brother in it.)

What do we gain—what does Mr. Nudge gain—by diverting our attention from the magnanimity of the father and the cold distance of the other son to the partying and profligate younger son, who comes to himself and comes home?  The plausible point of the story is the elder brother; the headline is about the younger brother, by any account the least important character in the story.

There are two kinds of responses to this unhappy state of affairs.  The first is to look at a story’s name—the contribution made by Nudge and his henchpersons—and say, “OK, I see that name but what is it really about.”  That’s a worthy option.

The other is for everyone to do what Nudge has done.  Call these stories by whatever we want to highlight.  So the guy who had a really good harvest and, instead of sharing the bounty with his neighbors, built a whole new barn so he wouldn’t have to share anything at all?  Remember him?  The Story of the Evil Capitalist?  Luke 12. You see where this could go.

I’d rather not let it go there.  Let’s just treat these story names the way we (should) treat headlines in the newspaper.  They are some headline writer’s notion of what will get you to read the article.  They are not reliable guides to what the story is about.

[1] He picked up the nickname because of his enthusiasm for Malcolm Gladwell’s book Nudge, which argues that the force necessary to control a development can be extremely small if it is applied at the right place and especially at the right time.  The thrusters on a spacecraft are a good example of how little it takes if you fire them at the right time and at the right place.
[2] In English, we often say “the hoi polloi,” but hoi is just “the” in Greek, so I left it out.
[3] Nudge is devious but he isn’t very well informed.  On the other hand, I heard a lot of complaints when the King James Version of my early years began to lose out to the Revised Standard Version and every now and then, someone who hadn’t gotten the memo would ask, “But Jesus spoke King James, didn’t he?”
[4] Etymologically, people “conspire” when they are so close that their breaths—spiro—mingle (con-).  Nudge, Drudge, and Fudge are conspiring because the room is so small.