Every word we use has an infrastructure of meaning. That’s why it “means” something. It takes the word’s history and its current uses and the present context all for granted and then it just “means something.”When we accept the word, we accept the infrastructure, and we do so without thinking about it. When the Republicans invented the phrase “tax 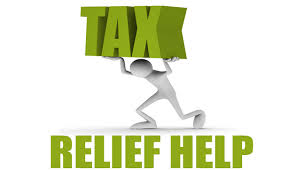 relief,” for instance, they did it very deliberately. They knew that once “relief” was established as part of the infrastructure, then “taxes” would necessarily be seen as something bad. “Relief” is what you want from pain or disease.

“Taxes are the price we pay for civilization” is the way Oliver Wendell Holmes put it. He wasn’t calling for “relief” because he saw what the taxes bought to be both necessary and desirable. Calling it “a price” takes for granted that we are buying something and the attention goes to the value of what we are buying.

The expression I have in mind for today is “spoiler alert.” When you buy the phrase, you buy the presuppositions and as long as you are using the phrase—no matter what else you say about it—you are enmeshed in those presuppositions. You can say, “I like spoiler alerts” all you want, but if you keep calling them “something that spoils our pleasure,” it won’t matter. Take my word for that.

Last week, I went looking for something else to call “it.” Usually “it” is “how the story ends.” So here’s the infrastructure that supports it.

The best way to appreciate a narrative is to follow its course from beginning to end.

The tension of unresolved conflicts and nebulous but frightening threats may build up, but leaving them to the very end is the right thing to do.

You might want to cheat and “read the ending first,” but you shouldn’t. It shows a lack of respect for the author and it make you look bad as a reader.

Following the development of the plot so as to maximize the tension—and then to enjoy the glories of the resolution—is really the only way to do it right.

Therefore, I will not “spoil” the narrative by telling you what happens. And if you ask me to, I will refuse because if I did, it would “spoil things.”

Does any of that sound familiar? I used to get it all the time. I have beaten it down among my friends and acquaintances. They still roll their eyes when I ask how the story comes out, but they grant me this little oddity. “We know,” they say, “You like spoilers.” 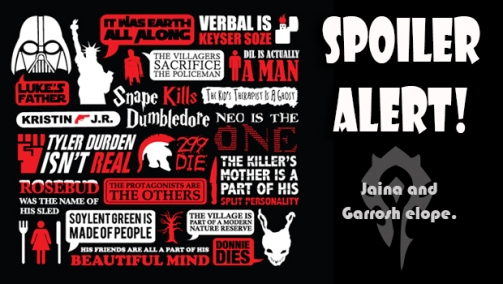 Actually, I don’t like spoilers; I just define them differently. Let’s start back a little. A “spoiler” would be something that spoils your enjoyment of the narrative, right? So you would think that the first thing we need to know is, “What is it about the narrative—we’ll come back to that expression—that gives you pleasure; that you would want to keep from being spoiled?” What I like best, particularly if the narrative is about a crime to be solved or an escape to be made or a relationship to be successfully begun or a character flaw to be overcome, is to know how it starts and how it ends.

That’s what I like. Then I can watch the intermediate events slide into place just exactly where I know they need to be. It’s the kind of pleasure that many people get when they read the book or see the movie the second time. For many kinds of stories, I get it the first time. So…anything that spoiled that sequence—the first, last, middle sequence—would be a “spoiler.”

Now we will consider, as I promised, “the narrative.” There’s more than one, right? Sometimes, the movie or the book begins with the disaster and the story is about what happens next. Andy Weir’s book, The Martian, for instance begins with these two lines: “I’m f***ed. That’s my considered opinion.” And then the story takes off. And since he is, himself, the narrator, we have every reason to think he survives.

You would think that a commonplace among readers would be that “the right way” to read a book is the way that gives you the most enjoyment and the least anxiety. The right way to read a scientific study is to start with the part you care about the most—the methodology, or the literature survey, or the commentary on the conclusions—and then read whatever other parts you need. “The right way,” in other words, would depend on two things: what kind of a book or movie or journal article it is and what your own needs or preferences are. You would think that. I do. 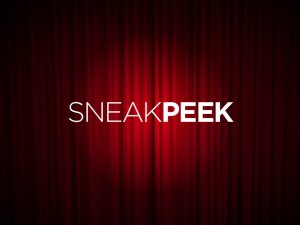 But if we’re going to look at it that way, we need to find something to call “it” other than a “spoiler alert.” I posed this problem to the Caucus at Starbucks last week. We worked on it for a while and didn’t come up with anything. I called Carissa Cunningham over to the table. She is an outstanding barista in a store that has a reputation for outstanding baristas. “Oh, I see the problem,” she said. “I’ll work on it.”

This morning when I came in, she pointed her finger at me and said, “Sneak peek.” I didn’t even need any context. I got it right away and I knew right away that she was right. I’d show you a picture of her working at my Starbucks, but I wouldn’t want to spoil your actually going there.

A “peek” is something you want. No one forces you to take a peek. In fact, my Mac has a “quick look” feature that does’t really open a document, it just shows you what you would see if you did open it. The infrastructure of “peek” is that it is desirable and for me, usually, it is.

I don’t think “sneak” does anything for anyone with my perspective. I think it is called a “sneak peek” to imply that it is something you really shouldn’t be getting. That ought to make it more attractive. Or maybe it is just a tip of the linguistic hat to those other people—the spoiler alert people—saying, “I know you guys think I shouldn’t be doing this, but, look, I am.” I’m not really sure which of those two it is.

And thank you, Carissa.