Jesus and the Lost Velociraptor

Here is a satirical picture that my son Dan passed along to me. I think it is laugh-out-loud funny. He and I enjoyed it together.

I call it “satire.” What is satire? From a collection of similar definitions in the Oxford

English Dictionary, I harvested this one: “A thing or circumstance which exposes the faults or absurdities of something or someone; a mockery. “

So whose absurdities are being mocked? I think it is fair to say that religious conservatives are being ridiculed (Latin for “laughed at”) in this picture. It isn’t directed at Jesus; it is directed at creationism.

I chose conservatives as the likely target for several reasons. First, of all the kinds of pictures of Jesus there are, this is the kind that shows up in conservative homes and churches. It is a thoroughly Caucasian Jesus wearing a Brooks Brothers robe and looking messianic. I wouldn’t have a picture of Jesus looking like this in my house.

I categorized conservative Christians as the target also because of the cuddly little velociraptor and that’s also part of why I think it is funny. This is the picture that is being spoofed. Everything the same except the “lost sheep” is now a lost velociraptor. 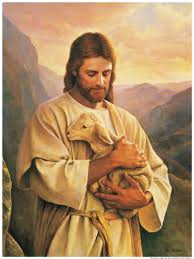 There is a branch of religious conservatism that argues that all creation happened at the same time. That would mean that humans and dinosaurs existed at the same time. Scientists who study the formation and development of life on our planet say it didn’t happen that way and they have warehouses of data supporting the assertion. [ Footnote 1 A much more challenging evolutionary development is the destruction of all the anaerobic bacteria on earth as oxygen began to be produced in such quantities that it could not be captured and stored. This was about 2.3 billion years ago as scientists calculate it. This is one of the greatest catastrophes earth ever experienced and not just because it cleared the way for oxygen-breathing mammals.] are not persuaded because they calculate that the cost of admitting the validity of the science would be the loss of their faith in the inerrancy of the Bible. Even liberals like me would agree that trading good information about the development of life forms on earth for good information about everything else—why are we here, is life worth living, does God actually give a rip about our lives?—would be a bad trade, but liberals like me argue that you don’t have to trade one for the other. God hates science denial the same way He hates meaningless religious observances (Amos 5:21).

It is this refusal to agree to the conclusion the data demand that so irks everyone else—everyone but the conservatives—and that makes them a target for satire. There is anger in this satire. Ordinarily, ridicule is not thought to be a good thing and the most common justification of it is that they, whoever “they” is, deserve to be ridiculed.

Once upon a time there were blasphemy laws in the United States. [Footnote 2 When I think of blasphemy laws, I think of Muslim countries and Shariah law. The federal courts acted on the blasphemy laws of the Commonwealth of Pennsylvania in may of 2010. SeeGeorge Kalman v. Pedro A. Cortés in U. S. District court for the whole story.] is no reason for Charlie to fear prosecution under such laws. Blasphemy is a charge that makes a lot of sense in a society where things are held to be sacred. If nothing is really sacred—we would say “sacrosanct,” I believe, a real demotion—then blasphemy isn’t just a bad idea; it’s impossible.

Charlie also knows that wild-eyed conservatives with double-bitted axes are not going to storm his office and kill his staff. In the U. S., conservatives limit themselves to rearguard gestures. Pretty much anything that gives the finger to the secular majority will do the trick: a few tons of marble bearing the ten commandments in the courtroom, a creation museum next to an interstate highway, a paper banner with scripture quotations for the football team at a public high school to run through. Anything, really, except violent reprisal. So Charlie is safe. 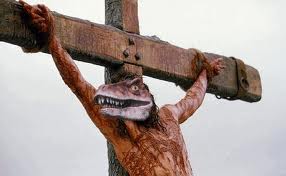 Charlie does know that there are people who still have some notion of “sacred.” He thinks, I suppose, that they are ridiculous and should not be coddled by having their “sacred images” respected by others. That would make what was once called “empathy” into some notion of “complicity.” People who feel (in the general case) that there are “sacred things” or who feel (in this specific case) that images of Jesus are sacred, need to get over it. [Footnote 3 In my lifetime, “irreverent” has become an entirely positive word. “Irreverent” is why you might want to subscribe to a magazine or join a group. On the other hand, a great deal of reverence has attached itself to NFL football, so it may be more a change of location than any decline in religious fervor. Jonathan Haidt in his, The Righteous Mind, introduces his chapter on “religion” with a long and loving description of pre-game activities at the University of Virginia. He was serious about it, but he wasn’t being Cavalier.] “sensitive” toward their feelings will only postpone the inevitable day of reckoning when they will grow up and join the secular society of adults, having (finally) given up their infantile fantasies.

Now let’s say that Charlie has a friend. The friend could be a person acting on her own. She could be the general counsel for SEAR (the Society for Empathy toward All Religions)—still a friend, but also an attorney with a client. In olden times, she could have been the staff person responsible for writing the rules to implement the legislature’s new blasphemy law. In any case, she comes to Charlie and says, “Please don’t publish that picture.”

On the other side of town, religious conservatives are organizing a rally, then a boycott, then a lawsuit against Charlie’s impiety. But the leader of these churches has a friend and he sits down with the pastor and says, “Please don’t retaliate against Charlie for publishing his picture.” This friend could act on his own behalf or he could be the general counsel for Free Speech in Our Most Basic Liberty.

There are some things that really need to be said, even though they are going of offend people. But if the only value is the offense it gives, why would we think it was a good idea to do it? Take the one above, for instance, which I found on the same page. Is it funny? Is it like the Jesus and the Velociraptor picture? Is it just vicious? Does it depend entirely on whose ox is being gored?

I’m willing to go as far as the first picture. I wouldn’t go to Charlie’s office, no matter how well I knew him, and plead with him not to publish it. The second one…I might go. “Charlie,” I would say, “A lot of people are going to think you are making fun of the central reality of their lives. And even if that doesn’t move you, consider that crucifixion real
ly isn’t all that funny.”

2 Responses to Jesus and the Lost Velociraptor