Not a Democrat any more. Maybe.

On November 4, the state of Oregon will start counting votes.[1]  Measure 90 will either

win or lose.  If it loses, Oregon will continue to have closed primaries in May, in which Democrats cast their ballots for the candidates they think best represent their party (and/or have a chance to win) and Republicans—and all the other parties—do the same.  Then, in the general election in November, the primary winners face off and someone has to actually take office.  If Measure 90 wins, everyone votes for the nominees and the top two (few?) nominees face off in November.  And if Measure 90 wins, there really isn’t any practical point to my being a Democrat.

There are lots of other parties in Oregon.  The environmental side of me likes the Pacific Green Party.  Here’s what they say about themselves: “We are governed by principles and values. Unlike Democrats and Republicans, we do not accept corporate cash.  Our platform is based on our values of peace, sustainability, grassroots democracy and justice for all.”

Is a party like that going to win anything?  Of course not.  And a scouting party never defeats the opposing army.  That’s not what they are for.  Besides, I could join the Pacific Green Party and give them money and still vote for the furthest left electable candidate—which, in Oregon in most instances, will be a Democrat.

The Pacific Green Party also says this about Ballot Measure 90: “BM 90 would create a 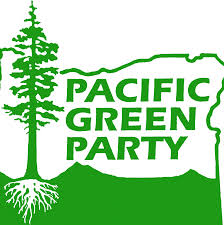 “Top Two” election system. Top Two has been a complete failure in California where it has been used for two elections. Voter turnout in California hit an all-time low using Top Two. Californians from across the political spectrum are calling for its repeal.”

And if I am freed from the connection between voting and membership, I might also consider the Progressive Party.  Here’s their first “plank.”[2]

1. We work for real campaign finance reform. Oregon Democrats and Republicans have enacted limits on political campaign contributions but have repealed voter-enacted limits 3 times. Campaign spending for Oregon state offices has skyrocketed from $4 million in 1996 to $57 million in 2010. Spending by candidates for Oregon Legislature increased another 13% in 2012. Winning a contested race for the Legislature now typically costs over $600,000, sometimes over $1 million.

I love the idea of “getting money out of politics.”  No party that

relies on major donations can afford to say what the Progressive Party is saying.  But remember, I can always vote for Democrats in November if I want to.  Take a look at the difference between Teddy Roosevelt’s Progressive Party and Oregon’s current one.  What does that tell us?

Finally, there is the Working Families Party.  They come at it a little differently.  They have goals as does every other party.  Here’s a statement: “We’re about improving the economy for working people. We fight for new jobs, living wages, workers’ rights, better education, affordable health care for everyone, and a government that listens to working families, not huge corporations or other high-powered special interests.”  Notice the assonance and the nifty rhyme.

But then they do something else.  They endorse “good candidates,” whatever party label those candidates happen to have.  “Good,” of course, is defined by the core values of the party, as it should be. Here’s what they say about how they work:  How do we make sure that politicians listen to us? We research the records of all candidates running for office in Oregon –— Democrats, Republicans or independents. Then we support the ones with a record of standing up for the bread and butter economic issues that really matter to working- and middle-class families.

What does it mean when you see “Working Families” next to a candidate’s name?  It means you know that they have our seal of approval — and you can vote for them with the confidence that they will do the best job of fighting for working people.

Now the Working Families Party has, as I recall, endorsed Democrat Jeff Merkley for U. S. Senate and if they haven’t, they should.  An endorsement by the Working Families Party says that Merkley lines up with the values of the party better than any other candidate.  He is also almost certain to win, so he is a good choice for idealists and pragmatists both—provided that they are left wing idealists and pragmatists.

On the other hand, leaving the Democratic Party might be more than I really want to do, emotionally.  I have been a Democrat and proud to be a Democrat through the Vietnam war protests and the Civil Rights movement and Medicare and Medicaid and Title IX the protection of First Amendment rights and all that.  Am I really willing to look back and say that “they” supported all those efforts or am I going to want to continue to say that “we” supported them?

Honestly, I’m not sure.  That’s why the last line in the title is “Maybe.”  Or maybe Measure 90 will just be defeated and I can just stay a Democrat.  Fox News, Rachel Maddow, Al Jazeera America and the BBC will all tell you the same thing about the outcome on November 5.

[1] In most states, they say Oregonians will “go to the polls,” but we don’t have any polling places in Oregon.  We have drop boxes for people who didn’t mail their ballots in in time.
[2] “Plank” is a joke within a joke within a joke.  You call the principles that you “take your stand on” a “platform” because everyone knows what it means to stand on a platform.  And you call the individual elements that make up the platform, “planks” because if the platform were wooden, it would be composed of separate pieces of wood.  If you said that the planks “constitute” the platform—which is true—you would be doubling back to the first joke because the –stit part of “constitute” comes from the Latin verb meaning “to stand.”

2 Responses to Not a Democrat any more. Maybe.