Yesterday, June 20, four Presbyterians at the church’s annual national meeting, voted for divestiture.  Had they not, the church’s motion would have failed again—as it did last year, by two votes—but because they did, it passed this year by seven votes.  The proponents of this measure, which pulls funds the Presbyterian Church controls away from Caterpillar, Hewlett-Packard and Motorola Solutions, managed to gain nine votes in the 12 months since their previous failure.  That’s better than a vote per month; you have to give them credit for slow but steady progress.

This action by the Presbyterian Church U. S. A.[1] has been opposed for a lot of reasons.  Here are three.  Some have said it is anti-Semitic; some have said it to too political for a church body; most commentators I have seen have ridiculed it as ineffective.

I have doubts about it myself, but I don’t have those particular doubts and in this essay, I

would like to say why.  I would also like to say that I have a red-headed sister-in-law at the General Assembly, but the redhead in this picture (far left)  is not her.

“Anti-Semitic” is a statement of motive.  Since I have studied motives carefully for the last forty years or so, I feel that I have the right to say that I have lost faith in them.  I stop listening immediately to anyone who says that “the motive” for an action was something; anything.  I don’t believe in actions taken for one motive and if I did, I would not believe that the actor was likely to know what that motive was.  What is my (one) motive for writing this piece?

It is also true that just what the state of Israel ought to be doing in the West Bank (and in Islamic parts of Jerusalem) is a matter of vigorous public debate in Israel.  Is the Israeli left wing “anti-Semitic?”  Is it anti-Semitic when Haaretz publishes it or is it just anti-Semitic when that same editorial is published in the Seattle Times?  Everyone should be free to argue that to consequences of annexing the West Bank will be good in these ways and bad in those ways and so Israel should or should not do it.  Let’s just leave “anti-Semitic” aside.

Is it too political an action for a church body—even the governing body of a church—to take?  No.  It isn’t.  I don’t think it would be out of line for the General Assembly to adopt a letter to Secretary of State John Kerry, urging him to set a limit on what are still called “the peace talks” between Israel and Palestine.  We could say that we still have high hopes for “the peace process” and wish him well.  We could say that we have no hope left for “the peace process”—in my view, that is Kerry’s own opinion—and that we urge him to set a time limit, after which the U. S. will remove its Security Council veto on Palestinian membership.  We could say that the U. S. has no business meddling in the east end of the Mediterranean and that we think our presence there is counterproductive.  The Presbyterian Church is made up almost entirely of U. S. citizens, any one of whom might write such a letter and any number of whom might urge their governing body to write such a letter.  It is perfectly in keeping with the norms of public discourse in the United States.  It is not too political.

The action of the General Assembly doesn’t go that far, however.  It does not urge the U. S. to take some new foreign policy step.  It removes our complicity, or at least some of it.  The result of the vote will be to remove the $21 million of church funds that are currently invested in those three companies.  The church is saying, “We don’t want our money to be used that way.  Please give it back.”[2]

What argument can be made against that action?  That the church is obligated to invest in companies that make the Israeli annexation of Palestinian lands easier?  That doesn’t 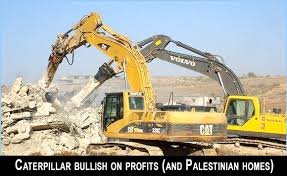 The only one of the three arguments that I think is worth taking seriously is the third one, above, that this action by the Presbyterians doesn’t actually matter much.  I think it might.  It doesn’t cripple the finances of Caterpillar, Hewlett-Packard and Motorola Solutions.  If those investments are financially rewarding and fairly secure, a lot of investors will fill in those dollars very quickly.

The space of appearance must be continually recreated by action; its existence is secured whenever actors gather together for the purpose of discussing and deliberating about matters of public concern, and it disappears the moment these activities cease. It is always a potential space that finds its actualization in the actions and speeches of individuals who have come together to undertake some common project.

Picture it as a way of moving a spotlight in the direction of a floodlight.  As the lighted area gets larger, more people are in it.  Or they have to move to get out of it.  This isn’t “light” in the biblical sense, which is always true and illuminates evil.  It isn’t even “light” in the sense of the “sunshine laws” which bring the dark works of government into the bright light of public attention.  This is just the “light” of public attention.  This is light in the sense that a sign that says: “We don’t serve genetically modified foods here” is light.  It raises a question everywhere else that would not otherwise be raised.  It is “light” in the sense that a sign is light that says, “We pay all our workers a living wage.”

There is no corresponding urge, on the parts of other companies, to post “counter-signs” saying “Get your genetically modified food here!” or “Yes!  We do pay our employees so little that it takes federal welfare programs to help support them.”  So this is not “our light” in the sense that it makes other actors feel light setting up their own lights.  This is the kind of light that raises questions in places where they would not otherwise have been raised.

This “lighted area,” the area where the question of our role in Israeli foreign policy is raised, is larger as a result of this Presbyterian action.  The “space of public appearance” now engages more people and more groups than it did.  The question is now raised where it would not formerly have been raised.

I think that’s a good thing, but even if you don’t, you will have to admit that it is a thing.  It is some thing.  We have to pay attention now to things we did not have to pay attention to before and the thing about “paying” is that it engages resources that could have been used otherwise.

So for the four Presbyterian delegates whose votes broadened this space of public appearance, thank you.

[1] That’s the mainline Presbyterian Church, not any of the more conservative branches.  It is also the denomination to which I belong, so when I say “we,” it is the main body of the Presbyterian Church I am referring to.
[2] You might not think that we would actually say “Please,” but, in fact, Presbyterians are notably polite.  That is one of the reasons it takes us so long to make decisions.
[3] Arendt is also known for the expression “the banality of evil,” which is the way she described Adolf Eichmann’s participation in the horrors of the Holocaust.  It is a phrase that cost her most of her Jewish friends and even in New York, it is hard for a Jew to be without Jewish friends.