Respect for the elderly.  That was always a hard sell for me when I was young.  I think I was a more achievement-oriented than a traditional-values little kid.[1]  Now I’m old and it still seems mostly like a scam to me.

But now that I’m old, it seems more complicated.  Here are some examples.  I still think the elderly should be respected for their achievements (rather than just for being old), but I now see that there are many more kinds of achievements than I could have imagined when I first wrestled with this issue.  There are old people, for instance, who experience pain every day and who, nevertheless, refuse to make that the text or the subtext of their social relationships.  I respect that achievement a great deal.  There are old people with firmly analog minds who continue to wrestle, in good humor, with the endless digital upgrades that interpose themselves between the old person and the simplest action.  My own patience is so very thin and if makes me respect their perseverance all the more.

So my notion of what the elderly ought to be respected for has become a good deal broader, but the essential difficulty of “respecting” an old person just because so many years have elapsed between the day of his birth and today, still seems like a great difficulty.

This brings me to Chapter 6 of Jared Diamond’s The World Until Yesterday: What Can We Learn from Traditional Societies?  Chapter 6 is called “The Treatment of Old People: Cherish, Abandon, or Kill.”  It is titles like this one that move me in the direction of reconsidering whether old people should be respected—look at the alternatives!

Respect for the elderly has been a central part of many traditional societies.  Diamond makes an exception in the case of nomads, who simply cannot carry extra people from place to place, but for many societies, respectful treatment of the elderly is fundamental to how the group lives.  Diamond discusses two kinds of reasons for this treatment.  The first is the utility of the elderly for the tribe; the second is the values maintained by that society.

I’m going to use two images that help me think of what is happening.  The posts and the lintel image suggests that if either of the posts is taken away, the whole structure collapses.  The rope image suggests that we cannot continue to use the rope as we have, now that one after another of the strands has broken apart.

Imagine a lintel being held in place by these two posts: the utility of the elderly to the society and the value put upon the elderly by the society itself.  Now take away one of the posts.  See what I mean?

Diamond got me thinking that ideas like “respect the elderly” were once not just moral exhortations.  They were extremely practical.  Think of a formula like this one: We do and should respect the elderly because, after all, they are the only ones who can ___________.  It is what goes in the blank that I am thinking of when I use the word practical.

I want to look at each one of these, but the thing I notice first is that they are all practical.  If “showing respect” is expressed as behavior and demeanor, it is nevertheless based on the contributions of the elderly to our survival—all, that is, except the last one.  A clearer way to phrase the first three is: bad things will happen to us if we do not show respect.  The point this argument is getting to, on the other hand, is:  how does the moral exhortation hold up once the practical supports for it are removed?

Let’s take the first one: living in their house.  Traditional societies are either patrilocal or matrilocal.  We live, in other words, in the father’s house or the mother’s house.[2]  In traditional societies, that is where we live and where we ought to live.  Modern societies, by contrast, are neolocal—we live in “some new place.”  In our new place, we don’t live “with” or “under the supervision of” the parents.

What does that mean?  Well, if you take them one at a time, they don’t mean very much.  We would not say that we do not owe honor and respect to our elders because, after all, we do live in a separate house or a separate village.  My argument, rather, is that “respect” is the effect of many such obligations.  Snapping one of the strands still leaves a pretty robust rope. 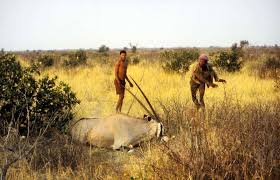 The second is that we owe respect and deference to the elderly because they show us how to make a living.  If you think of killing prey or planting crops as things a man would do, being a really good hunter or a prosperous farmer are very good things for a man.  For a hunter, the alternative is sometimes being the prey rather than the predator.  If an elderly and experienced hunter can show you how to survive an encounter with a lion, showing respect for him and for people like him makes a lot of sense.  Or, to think of access to desirable mates, being a prosperous farmer gives you a lot more choices than being an unsuccessful farmer.

If you think about gathering nuts and berries, the traditional supplements to the family diet, as women’s work, elderly and experienced women can show you how to do that job well.  That’s good for being a desirable mate on the one hand and for helping to feed the family on the other.  Respecting the older women who are really good at knowing what “food” is and where it might be found is a practical as well as a moral matter.

In modern societies, our elders don’t do that very much anymore.  Education for “economic activities” takes place outside the home and is conducted by professionals.  Imagine shop teachers and home economics teachers if you want examples that match the traditional society, but it takes an effort of will just to remember shop and home ec teachers.  And if we go to high tech examples, we know that elders are much more likely to learn from youngsters than the other way around.  Going back to the rope made up strands, we see that we have just snapped another one.

The third example is the easiest; the fourth, the hardest.   For the third example, it is important only to note that in traditional societies, it is often the elderly, usually the old men, who hold power.  Prudence requires that they be respected.  The fourth example is entirely reasonable, but it is a very long term project and although it looks like a prudent tradeoff in the long run (I respect the elderly now and when I am elderly, I will be respected), it requires moral sensibilities to make it work in the short run.

Above, I pictured the usefulness of the elderly as one pillar of respect and the values of society as the other.  The idea is that we could all imagine what would happen if you pulled out one of the pillars.  The rope metaphor has the same idea imbedded in it, but it is a little more subtle.  Imagine that the rope is woven of five strands, four of which I have named as examples.  The rope is sound and useful because there are so many strands and because, being woven together, they support each other.

The first strand is the kind of personal familiarity and personal obligation that come from living in the elders’ house, presumably under the elders’ rules.  The second strand is the crucial know-how that the elders are likely to have and the youngers not so much.  The third is the monopoly of political power that elders, usually men, have in traditional societies.  The fourth is the long term trade-off by which I respect my elders now so I will be respected by young people when I, in my turn, am old.  The fifth is the moral tenet that old people should be respected.

In my understanding, our “rope” is now missing four of the five strands.  I don’t think that fifth strand is going to hold.  In fact, I think it has already snapped in many parts of our culture and is badly frayed in others.  A good way of thinking about cultural continuity and change is to imagine instructing the new generation.

Traditional Parent:  You should always respect your elders.

Traditional Parent:  How can you even ask?  Look at the good things we would lose without them and the bad things that would happen to if we did not respect them.  Besides, it’s the right thing to do.

Or, as a way of looking at it from our own time.

Modern Parent: You should always respect your elders.

Modern Parent: Um…because it’s the right thing to do.

Those two exchanges capture my notion of how the five-strand rope has become a one-strand rope and is not really up to the job.  It may be time to give the “honor the elderly” pitch a rest or maybe retire it entirely.  There are, after all, other values than respect.  I have seen a lot of grandparents and grandchildren who genuinely enjoy each other’s company.  I have seen grandparents who save their children a great deal of money that would otherwise go for childcare.  There are a lot of good ideas that are worth keeping and that go by other names.

But I think “respect” as an attitude that is “due” the elderly has passed its “best used by” date.

[1] I don’t mean to imply that I achieved a lot; only that I thought that achievement was the proper foundation for respect.
[2] Those are references to the father’s or mother’s “line,” by the way, so it includes grandfathers and grandmothers.