How shall we understand the new pope, Pope Francis?

“If someone is gay and he searches for the Lord and has good will, who am I to judge?” Francis told reporters, speaking in Italian but using the English word “gay.”

That’s a clip from today’s New York Times, in a story written by Rachel Danadio.  She is careful to point out that the Pope’s remarks came during a very long trans-Atlantic flight.  Pope Francis was returning from a triumphant tour of Brazil and had every reason to feel good about what he had accomplished.  So he wandered back to the press room on his plane and had a very long talk with reporters, of which this one comment has been, so far, the most prominent.

“Who am I to judge?” is an interesting question coming from the CEO of the Roman 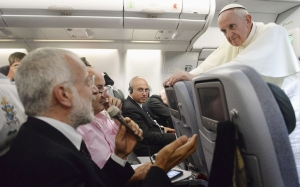 Catholic Church.  To Protestants, it is apt to sound like the head of the Personnel Department asking whether he should have a view on whether hiring decisions are distorted by racial bias.  “Yes, they might be,” he would be saying, in this example, “but who am I to judge?”  In the personnel case, a good answer would be, “You are the one who is breaking the law if there is a racial bias in hiring decisions.  Who are you?  You are the one who is going to jail.”

That isn’t the most interesting part of what the pope said, but it is the easiest part of peel away, so I thought it was worth starting there.  The Pope is also, according to Catholic dogma, “the vicar of Christ.”  What is a “vicar?”

Well…Joe Biden is a vicar.  The White House accepts a lot more meetings than the President can attend himself, so he sends the Vice President in his stead; as a substitute.  “In his stead” and “substitute” point to the most common meanings of the Latin vice, which is why the office is called “Vice” President.[1]

It would be odd, everyone would think, if Vice President Biden announced at a gathering, “Well, I don’t know how the President feels about this, but I, myself, don’t feel competent to make a judgment.”  It would be odd because Biden is the “vicar” of the President.  Following the logic, what the Pope really needs to do is to pass along Christ’s judgment, not to make one of his own.  And what is “Christ’s judgment?”

This is one of the many places where the argument turns nasty.  Homosexuality is not a topic Jesus ever addressed in any text we know.  He did talk about caring for the poor and inviting the outcast.  In Luke’s version particularly, he said really awful things about rich people.  He taught that compassion was the heart and the source of neighborliness.  He didn’t say anything about homosexuality.[2]

This means, to revert briefly to the Joe Biden example, that the Vice President has no judgment to pass along.  He is no one’s agent.  He speaks only for himself and is perfectly free to say, “Who am I to judge?”

No one believes that the Pope is free to speak for himself on a matter that threatens to seriously divide his church.  In the news coverage I saw, the reporters were very happy with Pope Francis’s “tone.”  He seemed humble.  No one imagined he was substituting his own personal judgment for the teachings of the church.  He wasn’t and, frankly, he shouldn’t.

The church over which the Pope presides teaches that a homosexual orientation is “unnatural” and reflects a “distorted” personality.[3]  Both of these are difficult charges.  There is no shortage of same-sex behavior among animals generally, so if “occurring in nature” is what “natural” means, then homosexual behavior is natural—not unnatural.  The argument that it is a distortion requires a judgment about what it is a distortion of.  Following this line of thought, the Catholic Church would be on the hook to show what God’s preferred personality was and that homosexuality is not an acceptable “version” of this personality, but a distortion.  Those are very hard things to show.[4]

Those are the issues as I see them in the large context.  What Pope Francis actually said man mean more in a small context.  He may have said that homosexual behavior is entirely unacceptable in priests, but a homosexual orientation is not unacceptable.  He would be saying, in other words, the same thing he says about heterosexual priests.  And what look like conditions in his remark—provided that “he searches for the Lord and has good will”—are not conditions that would not apply to heterosexual priests as well.  What priest should not search for the Lord and have good will?  And if all priests are resolutely celibate, what difference does it make?

In other words, Pope Francis may have said nothing at all.  On the other hand, seeming to have said something may have lit a fuse that is not as long as he thinks it is.

[1] “Vice” in the sense of “bad habit” derives separately from the Latin vitium, “fault.”  Richard Nixon’s Vice President Spiro Agnew managed to be a Vice President in both senses at the same time and he wasn’t the first one.

[2] He did say, in the Sermon on the Mount, that condemning other people is a very dicey thing to do and cited the principle that what goes around comes around.  The word Matthew chose for that saying means “to condemn;” it does not mean “to make a judgment.”

[3] This might be the time to confess that I am no scholar of Catholic dogmatic theology.  I got those two words—“unnatural” and “distorted”—from a site called “What Catholics Believe.”