The story of Herod’s anger at having missed his chance to kill the Christ Child has been around for a long time, assuming that the Gospel of Matthew dates from the 80s AD.  In the charged political atmosphere of the time, it was Herod’s failure that was featured.  This bad man meant evil, surely, but God intervened to spare the Holy Family.  It was a strong part of the story Matthew wanted to tell, also, because of all the Moses parallels.  The evil king (the Pharaoh) tried to kill Moses too, but quick action of his family saved him.  A lot of other babies the age of Moses were killed, however.  Moses eventually escaped from Egypt.  Jesus and his family escaped TO Egypt.

I’ve been familiar with those meanings for a while, but this year I adopted one of the time-tested devices for discovering that you’ve been missing something big.  The time-tested device is to try to tell the same story to children.  It deprives you of the language you customarily use.  It deprives you of some of the topics that you had thought were essential to the story.  It pushes you into the unfamiliar penumbra of really familiar stories.  It’s a good idea. 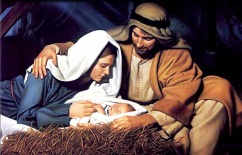 f Matthew’s story came when I was trying to find a way to downplay the massacre of the two-year-olds (and younger) in Bethlehem.  For children, I realized, Herod’s frustration and failure would not be the most accessible meaning.  The parallels with the life of Moses wouldn’t be in the top two or three either.  Nor would the close identification with some close-knit group–say an ethnic group– allow a celebration of how “we” escaped although there were a lot of casualties.  No group identification we are likely to have is going to protect us as persons from the horrible prospect of the malevolence of the powerful.  And you really want your own children to feel safe and cared for.

So a mother, listening to the story I have written—following Matthew’s account—is going to have to think about the feelings her children might have on hearing that a lot of little kids their age were killed just for being their age. 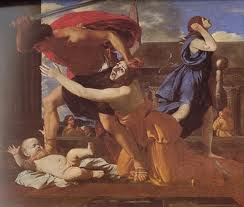 That’s the dilemma.  The rest of this is where my thoughts went after that.[1]  If I were the parent, I would not want my children to be frightened by that part of the story.  I would assure them that although this did happen, as the story says, it was a long time ago and a long distance away and things like that don’t happen to two-year-olds like you.  That might have worked, but it might not, also, because I had children who asked why a lot and “why” is where you get into trouble.

“A long time ago” imagines that these same things are not happening today.  In fact, we know they are happening today.  You don’t have to read the notes of the cases coming before the International Criminal Court to know that whole villages have been put to machete and fire.  You don’t have to get into how many of the women were raped before they were murdered to see that “the horror of Bethlehem” is not something you can consign to “a long time ago.”

There is still “it doesn’t happen here,” if by “here,” you mean the part of the city you live in.  That would probably be comforting for children even if there are other neighborhoods in your city where making it through the day alive is not something everyone can count on, especially those neighborhoods where there are gangs and drugs.  The operative sentiment there, not spoken aloud, would be “Thank God we don’t live in those neighborhoods where such things happen.”  But my kids might have wondered why any children live in such neighborhoods and I am not sure what I would have told them.

It’s really more likely that by “here,” you would have meant “here in the United States.”  A parent might try to assure a troubled child by granting that there are places in the world where really scary things, like the ones Matthew describes, do happen, but not here in the U.S.  But if you were to be asked why they don’t happen here, you would be faced, even if you were a very adroit parent, with a range of unsatisfactory answers. 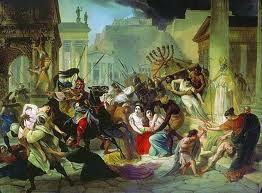 han other nations?  This would be a very plausible answer for a Roman mother if she were living in the empire that granted Herod his power.  “Yes, child, this could happen to an Israelite city, but Rome will protect us from such violence.”  That places the story very reassuringly  within Matthew’s world, but even children might know that Rome became less strong and was, in fact, sacked by people with no more delicacy than Herod showed.  And even if they don’t, the strategy of assuring children that we are too strong to allow that to happen to us, places around them a set of hostile actors who would do such a thing.  They are prevented, we would say, as long as we are strong enough to prevent them, but if they are there, who is to say we will always be that strong?

Would we go on then to say that the safety we want to assure to our children is the reason we spend a lot more on military forces and equipment than anyone else?  That answer leads to the nuclear-missile-carrying submarines, and the web of missiles and missile shields and military bases and unsavory alliances and all of that.  I myself have never had children who would have pushed the puzzle of “why we are safe” as far as this, but if the answer is that we are safe because we are stronger than our enemies, the answer does lead to the subs, the planes, the bases, and so on.

And even if it didn’t, you know the kids will stumble eventually over the rants of the prophets who mocked Israel for thinking they could be safe by playing the enemies north of them off against enemies south of them.  Strategies like that, the prophets said, are fundamentally flawed and won’t, in any case, last for very long.  So if you won’t tell them when they are two, Isaiah and Jeremiah will tell them when they are twenty-two.

To tell you the truth, I never had this difficulty when I told Matthew’s story of the birth of Jesus in the language I was more comfortable with.  Telling it for children seems, in retrospect, to have stripped out some of the buffering my more familiar language provided.

[1] None of this would have happened in the ordinary course of events.  December 24th was 21 hours long and the second of the Christmas Eve services at our church ended a little after midnight.  I mention the circumstances because my imagination is ordinarily under better control than this post illustrates.