Where Does This Issue Belong?

It’s an “issue,” as we say.  It concerns a lot of people.  Something ought to be done about it. Let’s imagine the easiest possible resolution.  There are three leaders in this societal constellation: one of the polity, one for the economy, and one for the society  Let’s call them tyrants—meaning nothing scurrilous by the term—so that we have three “areas” to consider and a tyrant for each.

All we have to do is to decide which tyrant gets to decide on this issue. 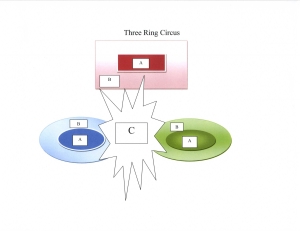 Well, that’s not entirely true.  First we have to explain the diagram.  The three colored figures are the polity (red rectangle), the economy (blue oval) and the society (green oval).  Each figure has a core—the darker color marked A—and a periphery.  The periphery—the lighter color marked B—is a kind of antechamber.  B is where an issue is when it is on its way to being a part of the core or when it is on its way out of that figure entirely.  An issue does not, in this figure, move directly from A in the polity to A in the economy.  It would first move from A to B in the polity, then from B to A in the economy.

This possibility of issue mobility is a concern to the tyrants, of course.  In most cases an “issue” belongs to me because it is something from which additional authority and additional revenue can be extracted.  When someone says, “This is a problem for Superman!” Superman smiles.  More heroics and more fame are in the offing.  There are issues, on the other hand, which are dead losers.  Sometimes they simply can’t be solved and whoever has the issue is “it” and will take the fall.  Sometimes an issue can be dealt with, but it will cost more to solve it than you will gain in revenue.  That’s a loser.  Sometimes it can be dealt with, but the only successful ways of dealing with it will make you enduringly unpopular.  That’s a loser too.

That much of an explanation will show why some potentially mobile issues—the ones in the B areas—are sought after while others are nearly pushed out the door.  What remains is to consider why C is there; that oddly astrocyte-shaped blob.  I wanted it irregular because problems that have not yet been placed as issues are…well…irregular.  I wanted those odd little rays to look just a little like tentacles.  I wanted the whole shape to strike you an inchoate and faintly menacing.

Problems are personal.[1]  Issues are public.  It’s when someone in authority says, or when a lot of people who have no authority say, “Say, that’s really a job for ______” that it become an issue.  It could be a job for the polity, a job for the economy, or a job for the society.[2]  It doesn’t “belong” anywhere, the way a lost wallet full of one hundred dollar bills and a credit card “belongs” to its owner.  It “belongs” somewhere in the way a job belongs to the only person in the community who has the tools and the equipment to keep the river from flooding the town.

So by the time a problem is “socialized” as we say’ by the time it has become an issue, there is still the question of where it can best be dealt with.  If I am the tyrant of the economy and I can see that my ownership of this issue will benefit me, I do everything I can to claim it for myself and to render your claims—you other two tyrants—less attractive or plausible.  If it looks to me like the kind of issue that will tar the hands of anyone who tries to manage it, they I will see it belonging properly to you.  I might say you are responsible for it.  I might say only you can deal with it.  I can say that no one else has the necessary authority or popular support or access to resources to manage it properly.  What I really mean is “Anyone But Me.”[3]

A strong smoothly functioning society will have three powerful settings and a clear process for placing the right issue in the right place.  Compared to those two things, nothing else matters much.

[1] There is more that really should be said.  As I use the word “problem,” it is not a condition at all.  It is not like hunger.  It is a formulation.  It is built by someone to represent what would be a very confusing situation without this representation.  So all problems are artificial in the sense that someone has built them for his own purposes and it is where it is because it has been placed there.  It is problems that have been constructed and placed that are likely to become issues.

[2] “Society” is decentralized in some ways: families, communities, churches, schools, sex roles.  But it is a complete system in other ways: a rigid class-based system, a broadly “spiritual” but not institutional population, a rabidly homophobic population, depleted, one-parent families and the institutions needed to keep them together.

[3] This was, very likely, the first ABM treaty.  Two tyrants agree that whatever it is, it belongs to someone else.