Please have your mask on for us

“Please have your mask on for us.”

That’s what they say at the Starbucks Drive-through where I get my coffee in the morning.   I really like it and I’d like to think about it a little today. [1]

I would like to take just a paragraph to try to make myself believable.  I am more aware of the nuances of language than anyone (else) I know.  I don’t listen attentively in any way that implies effort; I just hear a great deal.  And then sometimes I reflect on what I have heard, disassembling it to see why it worked or why it didn’t.  And since I do that as a matter of practice, I am not surprised that I did it again this morning.

[This from an article by Kaila Mathis in Adweek]

Even early in the morning in the dark drive through lane, there is a context to consider.  Here are some elements of that context.  For me, it’s dark and it’s early and I have not yet spoken or heard a human voice.  I am ready.  For Starbucks, there is the question of how a company that was designed to be what Howard Schulz, the founder, calls “a third place” can adapt.  [2]  It isn’t a “place” at all, in that sense, when it is only a drive through.  So, in some meeting somewhere, the question was raised, “How can we be as much like Starbucks as possible using only a drive through lane?”  The answer they came up with is what I experience every morning.

The barista gives his or her name.  The one I hear most often is named Nicoletta. [3]  She wouldn’t say her name if I were at the counter because I would be able to see her name tag, but out in the dark, talking to a post, it helps to have a name.  It suggests that there is a person in there and if I have his or her name, I can use it.  And I do. [4]

Then there are the finely crafted words, like “What may I get started for you?” [5]  And the other things that go with taking the order and suggesting that it could very easily be a larger order than the one you had in mind.  Those are the same as the at-the-counter words.

But we’re are in the middle of a pandemic and all of the baristas and many of the customers wear masks.  Not all, apparently, because the last line of the pitch is, “Please have your mask on for us.”

Point one:  There is no “and.”  That’s important.  It is not part of the order-taking.  The 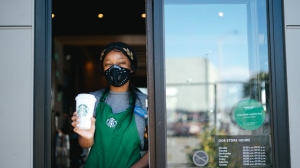 “and” would connect them; they don’t want them connected.  This is another kind of matter.

Point two:  “Have” is not “put.”  That might be because they don’t know whether you have a mask on or not.  I don’t know what they can see from inside.  But is probably because “put” implies that you are not wearing one.  A lot of people are not in a place by that hour where they want to be told what to do.  I am one of those.  “Have” establishes the condition they want me to be in by the time I get to the window, but it makes no judgment about whether I have one on at the moment.  Good choice.

Point three:  “For us” is a reason for the customers to be wearing masks.  This is a point that was lost entirely on several Republican members of the House of Representatives, who, being hidden in a small space with Democratic colleagues, refused to wear masks because they were sure they were not carriers.  You don’t wear a mask for you; you wear a mask for everyone else.  At Starbucks, that’s “for us.”

In short, a lot of very good things are packed into that last line.  My experience with Starbucks over the years is that those things don’t happen by accident.  Local adaptations are allowed, especially in in-person settings, where deviating from the script is an indicator of relationship, but by and large, “the Starbucks style” is in place from one store to another and from one region to another. [6]

[1]  It is things like this that made me want to start a blog in the first place.  It is true that I have been distracted by politics recently, but I would like to do more like this one.

[2]  It is a not-home, not-work, place.  They were designed to be like that and will be again, I am sure, after the pandemic is over.

[3]  I heard it as Nicola the first time and I addressed her that way as I gave my order.  She came over to the window, where I was paying for my coffee, to correct me.  “It’s Nicoletta,” she said, pointing to her name tag.  I really liked that.

[5]  There are three distinct elements in that one that I could celebrate one at a time if that line were the subject of this post.

[6]  I was not surprised to hear, in Vancouver B. C. the same greeting I would have gotten at my Starbucks in Portland, had the Portland version not been tailored to fit the continuing relationships I had there.