To take arms against a sea of troubles…

As the Prince of Denmark considers his options, “taking arms against a sea of  troubles” is the one he considers first.  Presumably that “taking arms” would be preceded by some notion of just what comprised that “sea” and the troubles it produces for him.  I know just what he means.

You can try not to be angry.  My experience is that it doesn’t work very well.  Individuals have other resources, of course, but categories of people don’t.  “White men without a college education,” for instance, comprise a category of Americans who regularly show up in studies of every kind as angrier than the rest of us.  “Categories,” I am proposing, do not have the resources for managing anger that persons have.

On the other hand, persons don’t have the options we often think we have.  We think we 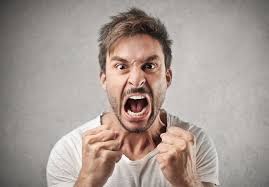 All those things work sometimes for persons.  None of them work for categories of angry people.  And this is amazingly applicable to us in this moment in time.  Here’s something to think about.

In his view, the center-left and center-right coalitions represent a structural aspect of contemporary democratic political competition and that they are likely, over time, to alternate control of the government…

On the other hand, in Isabel V. Sawhill’s view:

Should Trump win, it would be a signal that our cultural divisions have gone past the point of no return, that demographic and cultural change has come too fast for many people to handle, that a backlash has reached hurricane proportions.

Consider for a moment, the difference between a regular alternation between a center-right and a center-left coalition; and the “backlash has reached hurricane proportions.”  They can’t both be right.

In this context—the anger of categories of people rather the anger of a person—let’s consider our political options.  My argument has been, from the early emergence of Donald Trump in his political incarnation, that he is an effect, not a cause. [1]  We have allowed “Trump-favorable” conditions to flourish and when they have produced democratic anomalies, like Trump himself, we have allowed ourselves to be surprised.

So we take this view.  “Yes, I realize that the circumstances you face are outrageous, but we would like, nevertheless, for you to refuse to be outraged.  And particularly, we would like you not to express your rage.”  “The demographic and cultural changes,” Sawhill says,” have come too fast.”  I would add economic change; in fact I would feature economic change.

What are we really asking for?

The circumstances of your life are outrageous, we say, and what needs to be done is we need for you to control your rage.  We want you not to act out your rage, to justify your rage, or to support political actors who say in public what you cannot say.  About the circumstances, we say, “Well, that’s just how things go sometimes.”

Let’s consider the phenomenon called “blaming the victim.”  Liberals have been fond of

that device for forty years that I know about, and that is just the time since William Ryan’s book of the name was published. [3]  But consider it in the present context.  The core of President Trump’s coalition is made up of non-college educated white men.  They are people who have seen all avenues for economic advancement blocked off, not only for themselves, but for their children.  Some have seen recent immigrants competing very successfully for their jobs.  They have seen the old certainties—values they held to more vigorously than they embodied them, perhaps—stripped away: gender norms, religious norms, speech norms.  They have been found guilty of embodying virtues their parents were proud of; guilty of engaging in behavior that was once widely tolerated. [Note that here, as always when race is an element, the blamed is black and the blamer, white.  This eliminates any sense that the whites are also victims.]

It is things like this that are the soil that produce a weed like President Trump.  It is things like this that have “made them angry.”  (You see now why I introduced that language so early; now is when I need it.)  Being angry, they do and say angry things.  The accuracy of the things they say is not their chief virtue; rather, it is how well it expresses the pent up anger.

It is nearly impossible for me not to condemn the working class white men who embody so many things that I oppose.  Seeing so much of such behavior puts me in a difficult spot.  I don’t want to condone it; I don’t want to be complicit in it.  Everything I can think of to say by way of criticism would be routinely disregarded because it came from someone like me.  For all I know, some things are said just to gall people like me. 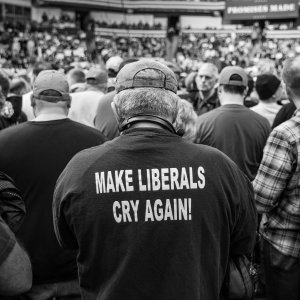 And if that is true—if so many of the things that are said and done are attempts to get under my skin—then I am in a difficult place.  Taking arms against a sea of troubles is not going to help me if I am being baited into taking arms against a sea of troubles.  If the problem to be addressed is that our political-economic system victimizes white men, then I could stand up for the victims.  If the problem is that angry white men victimize other, more vulnerable populations, then I could stand up for that second set of victims—the victims of the victims.

If standing up for either set of victims changes the subject away from what is wrong—what conditions are causing all the victimization—and shifts it over to my status as a critic of the first group of victims, then the war goes on and peace recedes from every attempts.  If refusing to be baited into futile class-based criticism looks good, I need to be aware that I am condoning not only the original conditions, but also the actions taken by the victims of those conditions.

[1]  He has become a cause during his presidency.  He has organized and justified the grievances of the most aggrieved blocs and given permission for anti-elite violence.  Still, the cause part is small by comparison.

[2]  I know many people don’t like the language of “X made me angry” but it isn’t untrue and it is the sliver of the truth that I want to emphasize here.

[3]  I was teaching political science at Westminster College in Pennsylvania at the time and I used to assign the book because it ran directly against the attitudes many of my students brought with them into class.  I am writing this post for the same reason, but for a different clientele: fellow liberals, this time.