A Klan of “Karens”

You may have heard about the fuss kicked up by Amber Lynn Gilles at the Starbucks in San Diego. The short version is that she didn’t wear a mask, as store rules required her to do, and was not served. I don’t think her story is really unusual, but several aspects of the narrative caught my eye. For one thing, someone started a GoFundMe account in the barista’s name. For another, the New York Times wrote about the encounter which is how I heard about the rationale.

That’s the short version. I would not like to perform a brief detour to apologize to any 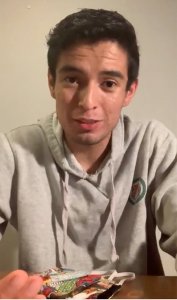 friends—not “former friends” I hope—named Karen. [1] On my own behalf, I will say that I have heard “Over hill, Over Dale” all my life and have learned to think they must be referring to someone else. And finally, I allowed myself a little fun in the title “Klan of Karens” on the grounds that the first two K’s in KKK, are a reference to the Greek work kyklos, meaning “circle.” So a circle of “Karens”—emphasizing the current meaning, an emphasis on personal entitlement—would still be a KKK.

Now back to the story for the long version. There is a lot approve of in this story, like Starbucks policy and the behavior of barista Lenin Gutierrez (pictured at the right). Also, of course, a lot to disapprove of. But rather than doing either, I would like to pay attention to the several responses Ms. Gilles unleashed. I am going to take them in the order that they interested me, so don’t try to string them together as a narrative. You can do that with the hyperlink.

“They are stupid,” said Ms. Gilles, “and so are the people wearing them.”

It is possible, I suppose, that saying “masks are stupid” means that they look stupid, a way of saying they make me look stupid. But more likely is the charge that they are stupid because they don’t work and/or they are unnecessary.

To poke a little at whether they work, we would need to know what they are supposed to do. They are supposed to keep the people around you free from any infection you might otherwise have shared with them. That means that it requires some such methodology as contact tracing to determine whether the people in our wake are being infected and that is not the kind of information Ms. Gilles is at all likely to have.

It is more likely that she intended to say that they were not likely to keep her from getting sick. (Her direct comment was, “I don’t need one.”) But on beyond that, there is the question of whether Starbucks should be permitted to protect their employees from people like her. I don’t think even Ms. Gilles would say that, but given the nature of her charge—they are stupid and so are the people who wear them—she doesn’t have to.

Ms. Gilles said that she was “denied and discriminated against.

This is what Starbucks is charged with. Surely there is no debate about the first part. She demanded to be served even though she was not wearing a mask and Starbucks said no. She was denied. Ordinarily “denied” connotes that one was denied something he or she had a right to. No one says, “They denied me entrance to the theater because I didn’t have a ticket.” The whole charge really ought to have the form: denied X because of Y even though Z specifies that I have the right to X. Following that form would have required Ms. Gilles to say just what she was denied or to say that Starbucks had no right to deny it.

“Discriminated against” is a little more complicated and that complexity is brought to us by the loss of meaning of “discriminated.” “Discrimination” was still mostly a good thing when I became acquainted with the word.

It is the addition of “against” that enables Ms. Gilles to say that something bad had happened. [3] But in the absence of a standard, she can only mean that she didn’t like the decision. To say more, she would have had to say that Starbucks should not have had the standard they do have.

Next comes Ms. Gilles justification of her behavior.

“I didn’t harass anyone,” she said. “I called them out because I’m frustrated.”

There are three points of interest here. The first is what “harass” means and the related question of who gets to say what it means. The second is the substitution of “called them out” for “harassed.” The third is her explanation of why she did it: she was frustrated. [4]

Lenis Gutierrez, the barista, describes it this way.

“…she started “cursing up a storm” and called people “sheep” before walking out. A few minutes later, she came back, he said, and asked for his name, took a photo of him and said she would call the corporate offices.”

My guess is that her feelings of frustration came from the barista’s request that she put on a mask. The sense that she had “called them out” more likely came from her coming back, taking his picture, and threatening to call the corporate offices. That is the part she likely identified as “calling them out” and the part also that required her to specify her motivation.

A reader of the story might wonder why her doing all that did not fall under the label harassment. I wonder that. And how is “calling them out” different?

Ms. Gilles final salvo was more institutional. This is what she posted on her Facebook page:

“Meet lenen from Starbucks who refused to serve me cause I’m not wearing a mask. Next time I will wait for cops and bring a medical exemption.”

I think Ms. Gilles understands that the two actions she threatened are empty. What will the cops do if they come? Will they say that the CDC shouldn’t have recommended masks and that San Diego County should not have required them? It doesn’t seem likely. And what kind of “medical exemption” might she have in mind? “My doctors says I am free to infect as many people as I like?” That doesn’t seem likely either.

If a “Karen,” like Ms. Gilles—Leah Asmelash of CNN says that “a Karen” is “a potent moniker for someone decidedly out of touch”—were just one unusual person using unusual rationales for her demands, I wouldn’t have bothered with this. I do think, though, that her behavior and even the kinds of justifications she provided for it, are increasingly common and I think they are deplorable.

[1] I would like to make an immediate exception on behalf of a dear stepdaughter of mine, whose name is spelled “Karyn” and who is, most emphatically, not a “queen of entitlements.” That is, apparently, the principal meaning of the current phrase, “Such a Karen.”
[2] That use comes from the 1620s. The sense of discrimination “against” and “against” for unfair or malicious reasons comes from the 1860s.
[3] Although, in all fairness, the root of the word is the Latin cernere, which means to separate; dis- only adds “apart” to the root. So separating one kind or quality of things from another. Bette once had a job watching the green beans come down the line and separating the bad ones from the good ones. She did this by being discrimination. There is always, I guess, the question of how the rejected beans felt, being discriminated against like that.
[4] Not to sound any older than I really am, but when I got acquainted with the word, “frustrated” meant the failure or an attempt to do something. It didn’t say anything at all about how you felt about the failure. In its current use, “frustrated” is the name of a feeling. So Ms. Gilles doesn’t even have to say that she was frustrated; all she has to say is that she was “feeling frustrated.”