The first pass I made over my first ten years of blogging considered the foundational questions. Why blogging? Why the “dilettante” theme? Today I want to review what the political arc of the first decade has been. You wouldn’t think I would be surprised by it; I did write all of them, after all. And they all seemed appropriate to what was going on at the time.

Still, different things were going on at the time and there is an arc that has, as I look back along its shape, a predictability to it. Almost, but not quite, an inevitability. Looking back, I think, “Well of course I wrote about that; and then that; and now this.”

When I started in 2010, we were half way through Obama’s first term and I assumed, as most people did, that I was only one quarter of the way through his whole presidency. The first political blogs took the Obama presidency and the kind of politics in which it was set, for granted.

At the end of June 2010, for instance, I wrote a piece called “Obama’s Waterloo,” in which I took him to task for not making better use of the Gulf Oil Crisis and thereby violating Thomas Friedman’s maxim, “Never let a crisis go to waste.”

In August, I wrote “Good News for President Obama.” The good news was that the Republicans were looking like they were going to control everything for awhile, so it was time for the President to stop hiding out in the Congress—trying to get Obamacare passed—and come out in public again.

In November, right after a very discouraging election, I wrote “November 3, 2010: Day 1 of the 2012 Campaign” about how things were setting up nicely for Obama’s 2012 bid for re-election.

But then, the Tea Party Caucus in the House of Representatives didn’t go away as I 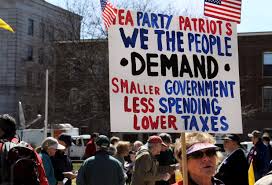 thought it would and it stymied the Speaker of the House, John Boehner and that was when I discovered Arlie Russell Hochschild’s book about the Tea Party. Strangers in Their Own Land helped me understand why “the Tea Party”—which was about to become the Donald Trump gang—wasn’t going to go away. [1]

At that point, I began to get seriously interested in how broad the support was for Donald Trump. Trump himself is just a flamboyant narcissist and for all his outrages, he never really interested me. It was the culture that produced and supported such a leader that interested me more. And that brought me to March 2016’s post, “The Donald is Just a Weed.”

The major metaphor there was that your lawn will produce what thrives best in that particular soil. You can treat what the soil produces, killing the weeds, but it will continue to produce what thrives best in that particular soil. It wasn’t a particularly subtle point. American society is constructed in such a way that candidates like Donald Trump are successful. To change that, you need to change the makeup of the polity itself. You simply cannot have high rates of poverty and high rates of immigration without producing populist resentment and Donald Trump is the expression of that resentment. That’s what the “soil” of the U. S. is like now.

Since that time, there has been a recovery of some of the institutions that will be necessary to oppose Trump himself and the political expressions of Trumpism. I am all for that democratic recovery, but nothing I have seen looks like an amendment of the soil that produced the Trump weed. It takes a great deal more than being anti-Trump to be anti-Trump-producing soil.

Since I realized that, I have become more interested in, and have written more about the soil. The soil has mendae (flaws) [2] in it and taking them out ex- mendae is “amendment.” We are more likely to think of “amending” as adding something to the soil than as taking something out, but you could argue that adding something is taking out the imbalance.

On February 6, 2019, I finally got around to proposing some amendments.

The first is the large value discrepancies in our society. The second is the completely inadequate system of economic distribution. The third is the “warring tribes” model by which the previous two inadequacies are translated into the governmental impasse I referred to above.

The value discrepancies were dealt with, briefly, in a post in May of 2019, which reflected on the work of Pippa Norris and Ronald Inglehart, especially their Cultural Backlash: Trump, Brexit, and Authoritarian Populism. They were willing to be specific about what kinds of attacks have been made on the values of white working class Americans. I had read a fair amount about the “backlash” without wondering just what “back-“ referred to. Backlash is a “hitting back” but there is almost nothing in the press I read that talks about what has been taken away from anyone, so the “back” of hitting back is mysterious.

That moved me to the question of social media, a way for angry people to pass around anonymously the most scandalous charges against their enemies. I get an article on my Facebook page and it alleges some awful thing that has the effect of justifying my anger, so I send it out to all my friends. I “share it” as we say. I don’t ask whether it is correct; it just stokes my anger so it must be right. In January 2019, I wrote a post called “Thou shalt not share false witness,” to protest against this practice. [3]

In the summer of 2019, Bette and I visited Scotland and I learned a lot about clan politics

that was new to me. There was nothing democratic about how clans worked. The clan chief was the principal legislative, executive, and judicial force. That is why clans worked, internally, and why there was always warfare between the clans. I learned while I was there that Clan Donald was one of the major clans of the period and it made me feel right at home. President Trump’s inclinations are all clan leader. He wants, in what is supposed to be divided government—that’s what Madison thought is was— to have in his government only “people he trusts fully.” What he trusts these people to do is not always clear, but it appears to have very little to do with the impartial administration of the law. That is why he has turned to firing inspectors.  Here, Dr. Amy Acton of Ohio makes a contribution to democratic politics.

But most of my thinking and writing have not been about the administration. They have been about the value discrepancies that are afflicting us and about the decline in the value of “truth.” Once, a hypothesis could be supported or not by examining the facts carefully and impartially. Global warming, for instance. Now that there are only “your facts” and “my facts” there is no way to resolve disputes. The old dispute resolvers—scientists—have been declared to be “really on the other team.”

This great flaw—summarized this week in the aphorism “truth is tribal”—is hard to deal with. Science is supposed to be the law and order of dispute resolution. Without law and order, it comes down just to firepower. But nobody wins a “just firepower” war. The armies just retreat to some safe place from which the battle can be continued by guerrilla means

The last decade seems to me to have been as long slow slide from government into social institutions and on into the free sharing of false information.

[1] I was enthusiastic about Hochschild’s book. The post in which I described it was called “Read this book!”
[2] The “amendment” series was built around the realization that the Latin menda means “flaw, blemish’ and and to amend ex + menda means to take out the flaws. I forgot about all that until this review essay.
[3] I liked the title because it identified “sharing lies” as lying, which I think it is. It also suggests the phrase “bear false witness” which is the way the King James Bible translates that particular prohibition.