The only people I know who are writing and talking about eating meat are people who are treating it as a moral matter or who are allergic to it.  I make an exception, of course, of the American Beef Council, which for years ran an ad, the closing line of which was: “Beef.  It’s what’s for dinner.”

Here is a passage from Melanie Joy, founder and president of an organization called Beyond Carnism.

For example, carnism teaches us that eating certain animals is normal, natural, and necessary, a belief that makes little ethical or logical sense, but which sufficiently disconnects us from our natural empathy toward “edible” animals.

The two words that are of interest to me in this paragraph are “carnism” and “beyond.”

I was not surprised to see that none of the dictionaries readily available to me has the “word” carnism. [1]  Carnism is a proposed word, but it is a very familiar kind of word.  It refers to an unprecedentedly broad category and it tacks the pejorative -ism on the end of it. 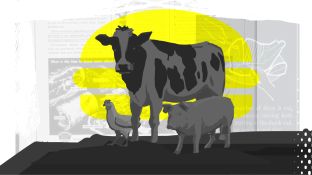 And if case you missed any of that, Ms. Joy adds: “The power of the $4.6 trillion global carnistic industry is unprecedented.”  So now, knowing nothing at all about this “industry,” we know already that it is huge (a whole new category); that it is powerful (unprecedented power) and that if works by disconnecting us from our “natural empathy.”  Nothing there sounds good to me, so I would say that this new word is a notable success.

The second word is “beyond.”  Ms. Joy’s group is called “Beyond Carnism.”  “Beyond” is a word that imagines a linear space and that there is some object in this space that is nearer us.  There has to be some such entity for the new proposal would not be “beyond” anything.  It would just be far away.

So Ms. Joy has the wit not to be “against” carnism, but rather to have transcended it as we move naturally “beyond” childish forms of expression or undiscriminating a taste for sweet wines.

So “Beyond Carnism”—apart entirely from what it might mean—gives us something bad (an -ism) and powerful, which we have already transcended.

[1] I was very much surprised, when I consulted the etymology of a more familiar term, like “carnivore,” to learn that the nominative form of all the carno- series is caro-.  With no n-.  We don’t get the n- until the genitive carnis.