My friend, Fran Page, gave me a gift last week.  In the narrowest sense, it was just the gift of an astute observation.  She said that the story of Martha and Mary was the story of the prodigal son—for women.  I love that idea. [1]

The story of the father with two alienated sons is an analogy.  It is a little bit breathtaking to say that the story of Mary and Martha can best be understood as an analogy to that analogy, but I don’t think it is crazy.  Let’s try.

So Martha is the Elder Daughter.  If one of the sisters was going to say, “All my life I have

Here are two views.  Jesus says that Martha is anxious and troubled.  The narrator says she was “distracted.”  My mother used to use the word “fussing” for that combination of dissatisfaction and busy-ness.  To understand why this was not the best choice, we have to wonder what was wrong with it. 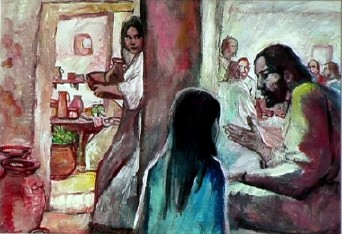 Let’s come at the same question another way.  When Jesus said, “You can help the poor any time you want because there will always be poor people in need of charity,”  (Matthew 26:11) what did he mean?  He meant that the action that had just been taken on his behalf was an exception to the normal run of events and was perfectly appropriate as an exception.  Jesus was very big on exceptions.  Note the elder sister on the left.  See any similarities?

When the Pharisees complained that Jesus’ disciples did not fast, neglecting an important spiritual practice, Jesus said that this time with the disciples was an exception to normal practice and that they would return to fasting when that time was over.  Jesus was very big on exceptions.

Martha is not attracted to the exceptional character of Jesus’ visit in her home.  It is a nice thing, of course, and everyone ought to share in it, but the work still has to be done.  Martha is making the case for equity.  There are two sisters and X amount of hospitality work to do.  Mary’s share is X/2 and she is not doing it.  Notice how un-exception-friendly X/2 is.  If hospitality involves 50 tasks, Mary’s share is 25. [3]  It’s always 25.  No matter who is in the parlor, Mary’s share is 25.  Equity demands it.

The rub, in this understanding of how to value different opportunities, is that it puts the demands of the system ahead of the opportunities of the moment.  The system is always there and Jesus is not.  Martha’s system is “equity.”  Make my sister do her share.  Jesus has nothing to say about equity as a principle, but, as I noted above, he was alert to exceptions.  “Martha,” he said, in effect, “do you really want to put the demands of equity ahead of this one chance for us to be together?”

Now…you have to be careful about exceptions.  Exceptions are an easy way to get out of your share of the work.  Exceptions are notorious in the way they ruin otherwise perfectly sensible diets.  “Well,” you think, “I don’t indulge ordinarily, but just this once.”  Exceptions are not a good way to organize a life and an even worse way to honor the ongoing demands of relationship.

Martha’s case was probably—there is no reason Luke would have told us about this— that it shouldn’t have been necessary to choose between the two.  We do all our work early and then we both sit down and listen to Jesus.  But for whatever reason, the work did not all get done early, and the choice had to be made.  Martha’s commitment to equity between the sisters and to the priority of the duties of housework can only mean that Mary would have to leave Jesus and go to the kitchen along with Martha.  That would have been fair.

But “fair” is not the top of the food chain when Jesus is a guest.  Willingness to set the routines aside to do what is best right now; that’s the top of the food chain. And that is what I think Jesus meant when he said that Mary had chosen the better part. She recognized the surpassing value of the moment and sacrificed the routine demands of hospitality to it.  I don’t think he meant that chatting in the parlor is better than working in the kitchen.

What does this way of looking at the situation require us to believe about Mary.  Is it possible that she routinely skipped her share of the work?  Of course.  In fact, I would guess that it is more likely than not. [4]  So we don’t need to say that Mary, whose work ethic was otherwise exemplary, chose just this once to skip work to listen to Jesus.  She might have been regularly delinquent.  In fact, I think that accounts, in part, for the level of Martha’s exasperation which was so great that she intruded on a guest to ask him to settle a family squabble.

I think all we are really required to understand about Mary is that she got it right this time.  There will always be housework, just as there will always be poor people, but sometimes you have to say what is important and what is not.

[1]  There is a broader sense, though.  She knew that I had been working with the story of the prodigal son (s) in a group for which I had high hopes and that the discussion had not gone very well.  And she knew that I had just heard the same sermon she had about the meaning of Martha’s relentless work ethic.  So tying the two together and handing it to me with a bow around it was a very good thing to do.

[2]  There are some, I know, who think that Mary is just hiding out in the parlor so she doesn’t have to be in the kitchen, but I think that is ungenerous.

[3]  I am a member of the Subtrahend Society, which specializes, as you would guess, in subtraction.  In our society, we would get at the 25 by subtracting Mary’s share (25) from the minuend (50).  If we did that, it would give us the chance to say that if Mary really wanted to make a difference, she should have done her work first.  It’s an arithmetic joke.  It doesn’t really have to be funny.

[4]  Mary was a second child and I know quite a bit about second children having been one.