The Hunger Games for Democrats

When I began watching the Democratic debates this week, I started thinking of this as a 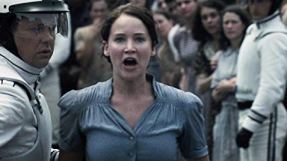 sort of tournament. Each candidate is not so much a way of envisioning who the Democratic Party should be this year and next, but a free-lancing entrepreneur. Successful entrepreneurs get more fame, more money, more column inches, and a chance to move on to the next round.

But as I watched the second night, I began to think more along the lines of The Hunger Games. Here’s what Wikipedia says about it.

The Hunger Games universe is a dystopia set in Panem, a North American country consisting of the wealthy Capitol and 12 districts in varying states of poverty. Every year, children from the districts are selected via lottery to participate in a compulsory televised battle royale death match called The Hunger Games.

There are some differences, of course. The children are all helpless conscripts; the candidates are all volunteers. The kind of death the losers die is a political sort of death and there are often many benefits even to losing. When the children in the Hunger Games die, they are just dead.

But there are similarities, too, which is why the metaphor occurred to me. The “death” of every other candidate gives life to my candidacy. Later, when only a few candidates are left, it will be important that there are enough to keep the Democratic options open and clear, but now there are just too many. Twenty candidates? Really? Spread out over two nights? Really? 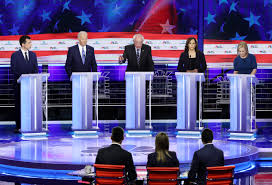 If I were a frontrunner, I would hammer on “electabiliy” until the entrepreneurs and the governors fall out. I would try to kill them off by denying them funds, by shrinking their airspace (there is only so much airspace) until they are electorally dead. The fewer there of them, the better for my own chances of surviving the Hunger Games.

Anybody who has a scandal hanging around—they made a recent run at Joe Biden for his high TI [1]—or who has a policy failure of some kind (racial conflict in South Bend, Indiana) is fair game. The fewer of them there are, the better my chances for being one of the debaters left on a small stage.

I have another idea. It is completely impractical, but as a dilettante, I claim that right. There are two kinds of divisions among the candidates. [2] They are the policy divide and the paradigm divide.

The policy divide is featured by the candidates, of course. What is your “plan” for gun control, for immigration, for healthcare? [3] These “plans” are at best “directions,” if they are not simply hopes.

The paradigm divide answers the question, “What is this election about?” It divides those candidates who want a system change—what would, in other circumstances, be called a regime change—from those who want to keep the present system and tweak it a little. The new paradigm candidates, like Bernie Sanders and Elizabeth Warren want a sizable readjustment of power in the U. S. In their view, nothing less will really accomplish anything in the long run. The “tweak the system” candidates, like Joe Biden and Kamala Harris and Corey Booker want to leave the power where it is and use it for better purposes.

So what I would really like is a tournament like baseball’s world series. The Tweakers are the National League and they will work out among themselves who is the best Tweaker. The Paradigm Changers are the American League and they will do the same. Then, instead of having the NLCS and the ALCS, you put all four “finalists” on the stage and let them work.

That’s not The Hunger Games. It is the Democratic Party’s best chance to decide who they are. This is hard for me, I confess. I want Donald Trump out of the Oval Office and behind bars as soon as can be managed. I would also like to see the U. S. become a stable and prosperous liberal democracy. The tournament picture gives us a chance to decide which of those we want more.

[1] Tactility Index. I just invented that one, but as everyone knows, there are people who do a lot of touching and people who do not.
[2] Besides “likeability,” which I know is important.
[3] This is a truly egregious misuse of the word, “plan.” I would like to see “plan” saved for things the candidate can do. No presidential candidate is going to deal with “the gun problem.” Unless, of course, you are Andrew Shepherd of The American President, who offers to go door to door and get the guns.