The bad thing about the NBC show New Amsterdam is that it isn’t very realistic.  On the other hand, it is well done and week after week, manages to surprise.  In this essay I am going to tell you about one of the best surprises.  I watched it again as soon as I could.

This is New Amsterdam, Season 1, Episode 17.  It is called “Sanctuary.”  The piece of it I cared about has to do with a convict named Burl (Olafur Darri Olafson)  from Rikers prison. [1].  When we meet him, he is stuck in an MRI machine because the hospital power went off.  Burl, his psychologist remembers, know how to fix stuff like that so they go dig him out of the machine and take him to the emergency generator.  It is broken too, so the hospital has lost both heat and light and the winter storm continues to rage outside.

The contrast I want to draw for you—the basis of title for this essay, “Something happened!”—involved these two scenes.  Here is the BEFORE scene.

Burl: If you want me to, I can fix it.  I’m going to need a set of plans…and…um…a reduced sentence.  A pardon from the governor works too.

Max Look, Burl, I’m not in a position to negotiate terms.

Burl Well then I guess people are going to die.

And here’s the AFTER scene.

Max:  Hey…did you fix this?

Burl:   Welding wasn’t gonna fix that.  I couldn’t tell you that or Reyes would have dragged me off.  I just figured that if this place had an old swimming pool, it might have a fuel pump system I could switch out.  It did.

Burl:   I wanna get better. 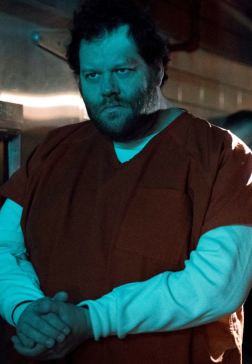 By the end, Burl has not only saved a lot of lives at the hospital, he has also outwitted the guard, Reyes.  He asked for a welder and warned that there might be an explosion when he started welding.  He knew a welder wasn’t going to do the job, but he had to close the door so he could “escape” to the pool area to see if there was a replacement part he could use.

By the end, Max has changed from “I’m not in a position…” to “What do you want?  Anything.”  Max wasn’t any more willing to bargain that Burl was and now, confronting the solution to the hospital’s problems that Burl has produced, he has nothing but gratitude.  It is the gratitude that produces, “What do you want?”  Burl is a scary-looking dude, right?  And in the early scenes, lit from below.  He looked like a goblin in handcuffs.

The short answer is that Burl has a change of heart.  My guess is that the way he has been seeing himself is just not compatible with the daring and the generosity he has shown in fixing the hospital generator and saving all those lives.  To continue to demand a reduced sentence in exchange for what he has already done simply throws away the meaning of his heroism and he is not willing to do that.

I think that is what happened.

But I also think it was helped along by Iggy, Burl’s counselor, who took something Max said to Burl and turned it into a tool Burl could use and making the transformation we see at the end.

Max: You could be a hero tonight, Burl.  I’m trusting you to come through for everyone.

In this scene, Max offers an alternative narrative.  “You could be a hero tonight” is not an event that is possible as part of the bargaining setting.  So long as Burl is saying that he gets a reduced sentence or people will die and Max is saying that he is not in a position to propose such changes, there is no narrative space at all for a hero.  It is not possible.  Max escapes from the limitations of the bargaining narrative by offering Burl hero status. 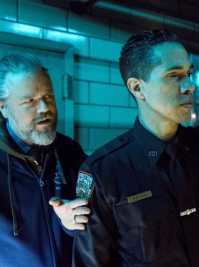 And Iggy, who as Burl’s counselor, knows more about what Burl wants that anyone, knows that Burl has said he wanted to change.  We learn that at that moment.  There is not a hint of it elsewhere in the episode.  But because of what Iggy knows, he can make Max’s offer a good deal more powerful.  “This is it,” he says.  That process you said you wanted to begin has to start right here.  Your hopes to change will be set back seriously if you walk away from this chance.  Iggy here, (left) with Reyes, the guard.

We don’t know.  I’ve offered two possibilities, one of them supported by some dialogue in the show itself, the other just my own construction.  But I really like mine better.  That may be because I have experienced it myself.  When you do something really good, you are reluctant to follow it up with something tacky or tawdry.  You really want to keep that sense of yourself as a hero just a little longer.   And I think Iggy helped by tying the “want to change” with the “this is where it starts.”

But whatever happened, I was taken completely by surprise when Burl, who was offered whatever he wanted, jettisoned the whole bargaining process and chose his own wholeness.  Burl and Max, in their negotiation, had talked only about what Burl could force the hospital to do.  But Burl and Iggy had talked about what Burl’s hopes for himself and in the end, Burl chose that conversation as his best choice.