I think the most important challenge facing Americans today is constitutional amendment.

The argument so far (Part 1) is not that we need a Constitutional amendment; it is that we need some constitutional amendment. Madison’s two solutions (allow factions to grow until they implode and put enlightened patriots in the Senate) have not held up all that well. No fault of his, of course. Mass-based political parties had not yet made their appearance on the American scene, so destructive partisan competition was the least of his worries.

Madison’s plan for enlightened patriots was dealt a significant structural blow by the 17th Amendment, which provided for the direct election of U. S. Senators. The Senate, in other words, is going to be filled by the same process that fills the House. So if the electorate at large is enlightened, thoughtful, and patriotic, then they will elect people like themselves to the Senate and all will be well.

Of course, all is not well. Here is a history of partisan conflict in the U. S. in two paragraphs. Jefferson won in 1800 by inventing a “party” with broad popular support. It was ideologically inconsistent because it welded together northern liberals and southern conservatives (the later, but justly famous Austin-Boston axis) but it was successful. The only parties that were ideologically coherent were minor parties until the 1970s when the GOP’s “Southern Strategy” became the “white party” in the south and started winning elections. The Democrats responded by ejecting their southern (conservative) wing and became a coherent liberal party.

The dominant political tradition was that you elected the “best people,” the people you aspired to be, to office on your behalf. It is worth recalling that the elegant Senator Frank Church once represented Idaho. With the decline of trust generally [1], voters came to want “representatives like me.” These are not the people I aspire to any longer; they are the people with the same prejudices and resentments I have. “He” (usually) will “fight for us.”

And that is what happened to Madison’s strategy of permitting one angry and turbulent chamber if it could be paired with one cool and thoughtful chamber.  The predicted implosion of factions hasn’t turned out too well either. So long as distances were obstacles and time was costly, factions would be hard to sustain. Skipping over a lot of intermediate improvements, let’s go straight to social media. Social media allows [2] the concurrence of interests over impossible distances with no loss of time at all. According to the Washington Post, 49% of Republicans believed in the Hillary Clinton “Pizzagate” scandal. Time and distance are, alas, no longer an obstacle to the fractionalization of American politics. [3]

So Madison’s two solutions have not held up very well. The soil he invented for us is badly in need of amendment. Madison’s “soil” was the structure of government. It wasn’t that he had such faith in electorates. Take this assessment, for instance. [4]

The latent causes of faction are thus sown in the nature of man; and we see them everywhere brought into different degrees of activity, according to the different circumstances of civil society. A zeal for different opinions concerning religion, concerning government, and many other points, as well of speculation as of practice; an attachment to different leaders ambitiously contending for pre-eminence and power; or to persons of other descriptions whose fortunes have been interesting to the human passions, have, in turn, divided mankind into parties, inflamed them with mutual animosity, and rendered them much more disposed to vex and oppress each other than to co-operate for their common good. So strong is this propensity of mankind to fall into mutual animosities, that where no substantial occasion presents itself, the most frivolous and fanciful distinctions have been sufficient to kindle their unfriendly passions and excite their most violent conflicts

Madison’s hope was that he could counteract these tendencies by governmental structure and mechanics.

That hope has been dealt a severe blow by the direction of the post-World War II economy. Here’s the short version. For some decades after the war, wages increased as productivity increased. That’s a really good thing provided that the work is still done by human beings. But productivity has continued to increase and wages have stagnated. This is a long term trend and it means that people who do most of the work can look forward to making no progress in their lifetimes and for things to be even worse for their children. If you see the beginnings of a “faction” there, you have seen clearly.

Not only that, but automation generally, and the much more extensive use of robots even for what used to be “white collar jobs,” means that wages are just not going to do the job of sustaining the workforce. People who work with their hand or who do essentially “algorithmic” jobs [5] are being replaced by cheaper foreign workforces and by even cheaper robots. This is what the market requires; there is no governmental fix for it. Government’s job is going to have to be to intervene to support the losers these market forces create. 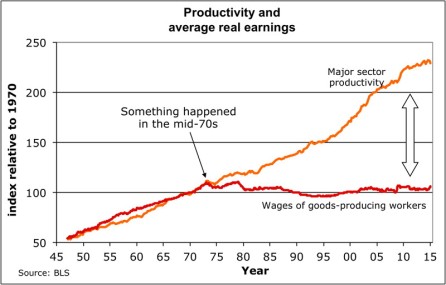 This brings us back to needing “some amendment,” rather than “an amendment.” We have an economically stressed bloc of voters. They are socially stressed as well. The old standards—the way it used to be and the way it ought to be are nearly the same thing for these people—have been replaced by new ones. All the assumptions that supported a white, Christian, androcentric country have taken a hit. These voters are angry about what is being done to them. They no longer believe in electing to office people who can rise above their situation, but rather want people who are angry about the same things. “Drain the swamp” reflects the same emotional levels as “Bring the mother down.” Neither of those is going to happen.

If we have a society that is economically stressed and that has access to government—“a government as good as its people” we used to say, thinking that was a good thing—and that wants an angry and vindictive government. That is the social (and economic) soil that grows the kind of angry populism we not have.

A society like that will always produce a government like this. That process is not going to change unless there is an authoritarian coup. So we need a way to amend, to remove the “menda,” if you recall the etymology in Part I, so the society will choose better governments.

How in the world are we going to do that?

[1] Beginning all over the West in the 1970s according to Francis Fukuyama’s book Trust: The Social Virtues and the Creation of Property.
[2] I despair of using “media” as a singular noun, but just try to read that sentence as “media allow.” It doesn’t work any more.
[3] I moved over from “faction” to “fraction” there because a fraction is not an integer, i.e. it has no “integrity.” As true in politics as in mathematics.
[4] And immediately following that, a passage that the young Karl Marx admired: “But the most common and durable source of factions has been the various and unequal distribution of property. Those who hold and those who are without property have ever formed distinct interests in society. “
[5] As opposed to “heuristic” jobs, which require context and judgment.