I’m a big fan of good analytical categories.  I value them in the way academics tend to, but on beyond that, I have been benefitted by them in some very personal ways.  Martin and Doka, for instance [1], distinguish between “intuitive” and “instrumental” styles of grieving.

On the other hand, the experience of grieving (the instrumental and intuitive styles are responses to the condition of grieving) is a fact.  Grief is true in your bones and in the pressure behind your eyes; it is true in the associations one word has with another; it is true in the way the numbers change on the clock.

My son, Doug, referred to me recently as “a grief sherpa.”  I think he invented the term 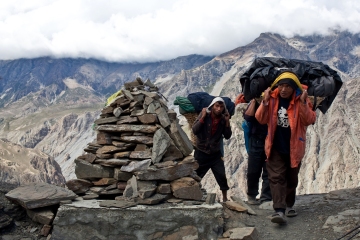 The thing about me is, though, if I have experienced it frequently or deeply or both, I have probably written something about it.  Bette says I think with my fingers and although I’m not admitting anything, I do know what she means.  People say to me, “What was it like for you?” and very often, they wonder if, when it happened to me, I wrote anything about it.  Usually I have.

they say it much more often than they say, “How do you think I should handle this in my life?”

The notion of “sherpa-ness” took my mind right back to Leo McGarry’s description of how he could help Josh Lyman. [3]

LEO This guy’s walking down a street, when he falls in a hole. The walls are so steep. He  can’t get out. A doctor passes by, and the guy shouts up “Hey you! Can you help me out?”  The doctor writes him a prescription, throws it down the hole and moves on. Then a priest  comes along and the guy shouts up “Father, I’m down in this hole, can you help me out?”  The priest writes out a prayer, throws it down in the hole and moves on. [4]

Then a friend  walks by.  Hey Joe, it’s me, can you help me out?” And the friend jumps in the hole! Our guy says “Are you stupid? Now we’re both down here!” and the friend says, “Yeah, but I’ve been down here before, and I know the way out.”

This a great story for people who are grieving.  For one thing, it implicitly recognizes that there is a time called “afterward.”  When you are in the middle of it it feels like it is always going to be like this.  Somebody who was once in the hole you are in and who got out establishes that “afterward” is possible.

And for another thing, the friend has already jumped down into the hole.  He knows some important things (how to get out, for instance) and he has made himself available.  He is a friend. 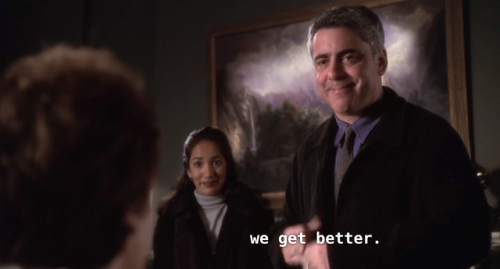 This turns out to be relevant to what is going on in my life these days.  Some very difficult things have happened to friends recently.  These are friends who know enough of my life to know that I have been in the hole they are in right now.  Climbing out of that hole if really important to them; it is important, even at first, to know that it is possible and when you start to talk about climbing, you are talking about sherpas.  I called sherpas “people who know something and who know how to do something.

Here’s one that helped me.  Just a little earlier than the West Wing story I cited earlier, Josh was having a wrap-up conversation with Stanley Keyworth, his therapist.  Josh has just learned that his panic reaction had been brought on by the music he had heard.

JOSH So that’s gonna be my reaction every time I hear music?

STANLEY Because we get better.

We do.  We get better.  I knew that in an abstract sort of way, but hearing Dr. Keyworth say it, especially the way  he said it, made it seem like something I could afford to trust, maybe to risk a little, hoping that it might be true.

So my sherpa-ing amounts only to this.  I have done this before.  I know some things and I know how to do some things.  And I am willing to help.

[1]Their book is very misleadingly titled, Men Don’t Cry…Women Do, Kenneth Doka and Terry Martin, but it is a superb book

[2]  There is also an informal use he might have known about: “a civil servant or diplomat who undertakes preparatory work prior to a summit conference.”  That meaning was new to me, but if it has gotten that far, it has probably also become a verb in the same way that “caddy” became something your caddy did.

[4]  This is Aaron Sorkin pushing as hard as he can against the narrative of The Good Samaritan.  That makes it much better when the role of the Samaritan is subverted.