I will watch Groundhog Day again on Saturday. I watch it every year. I just don’t seem to be able to help myself. (Just kidding about that last part.)

In this well-known movie, Phil Connors (Bill Murray) discovers that his life doesn’t mean anything. Nothing he does has any consequence at all beyond the end of that day—whenever that is. [1]

t isn’t just that his existence is ephemeral, like a mayfly. It is not that it does not last beyond that day; it is that it has no meaning beyond that day. He starts off tomorrow, having learned a great deal from all the yesterdays that he (only) remembers. [2] He finds that terribly discouraging, eventually, but his first response is that it is a great opportunity.

He learns how to rob the bank truck every morning so he is rich for the rest of the day every day. He learns how to seduce a very desirable woman by building up the pretense of a long relationship because he remembers what he learned “yesterday” and she does not. He runs away from an aggressive insurance salesman because it takes him more than one day to figure out how to handle him more effectively. He kills himself in any number of imaginative ways, but nothing works. He still wakes up the next morning.

There are two kinds of things he chooses to do: the episodic and the cumulative. We see

him on his “rounds.” He frightens the insurance salesman who always frightened him; he changes a flat tire for some old ladies; he catches a boy falling out of a tree; he performs the Heimlich maneuver for a man in a restaurant. Those are regular, but episodic.

He also does things that can’t be done in a day, even if they are done every day. He learns ice sculpture, for instance, and gets good at bar room piano.. And he learns to let go of his love for the only woman he loves because he realizes that to her, he will always be the jerk he was yesterday.

Something happened to Phil Connors that broke the curse of inconsequentiality. [4] We don’t know what it was. It is tempting to think that the virtuous uses to which he put his endless February 2 were the breaking of the curse. It doesn’t change the “spell” but it is no longer a curse. Except he doesn’t feel that way after he learns the curse is broken. “Anything different is good” he tells Rita (Andie McDowell) the next morning. 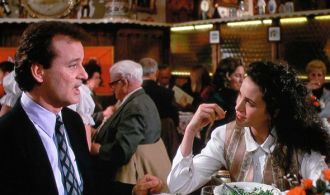 So what was it? Was it his love for Rita? That’s possible. The movie is a lighthearted comedy, although you couldn’t tell it from the way I have been writing about it, and “love conquers the curse” is well within the range of the movie. So maybe that’s the answer. [5]

Does Phil Connors live a life without consequence? Does nothing “follow” from the actions he takes? (That’s the sequor part of consequence: “it follows,” as we say). I’ve been saying that he could live such a life and he did and he hated it. But now I would like to say that he could not and did not and his belief that he did is a misunderstanding.

Phil Connors’ life had no external consequences. But the life he chose (eventually) to live had internal consequences for sure. The actions we take send out little signals like the chirp of a bat and by them we tell where we are (and, for humans, who we are) by hearing them bounce off things and return to us. Every time Phil acts—either the bad Phil (I don’t even floss anymore) or the good Phil (Not today, see footnote 3)—he send out a signal of who he might be. What he learns from hearing the signal return to him is the internal consequence of his action. Bad Phil’s actions have the consequence of confirming just how bad he is and how unsatisfying all that badness is. That’s why he gives it up.

him as the kind of person he really wants to be. He tried seduction and slovenliness and irresponsible work and theft and unconcern and suicide and found them to have consequences for his own sense of himself that he did not like. Now he is trying honest courtship and hygiene and solid professional work and honesty and compassion and he likes that Phil. It doesn’t break the curse (see the argument above on what the curse really was) but it gives him the richest life a person in his situation can have and either he likes it or his heroism in the face of inconsequentiality knows no bounds at all.  Jean Paul Sartre would marvel at an existential hero like this Phil Conners.

Some commentators have said that what works the magic for Phil Connors is that he finally realizes that today is the only day he has. Then they follow up by observing that that is true of all of us. But, of course, it is not. We make promises we intend to keep, for instance. Phil could not marry Rita using any wedding service I have ever heard without promising to love and cherish her for longer than the day they were married.

So I deny that the curse of inconsequentiality would be really good for us all. It did bring to Phil Connors an intense focus on that day. I won’t deny it. And like everyone else, I liked the good Phil and hated the bad one.

I’m not talking about the groundhog.

[1] We learn that it is not midnight, as Rita mistakenly believes it must be.
[2] He says to Rita that he is “a god” and maybe God’s trick is not that He is omniscient, but just that he had been around a long time and remembers everything.
[3] He laments the death of an old man whose life he has been unable to save. The nurse explains to him, “Sometimes they just die.” His response is powerful for a many who has only today to live. He says, “Not today.”
[4] Honestly, I don’t think I have ever had a chance to use that word before and I mean by it exactly what I mean. Although he redeems the day to the extent he can, he can never be to others the person he is now rather than the person he used to be. That is why it is a curse and why he is exhilarated to see it end, even though he has learned to thrive in it.
[5] In Woman of the Dunes, the Japanese story on which this is based, Niki Junpei, who is trapped the way Bill Murray is trapped, decided to stay because he has learned something valuable that he can teach to future generations. If Junpei’s imprisonment could be thought of by analogy with Phil Connors’ curse, then we would say that, given the choice, he chose the curse.