A Family of Shoplifters

I am told that is the translation of the Japanese characters for this movie. In English, the 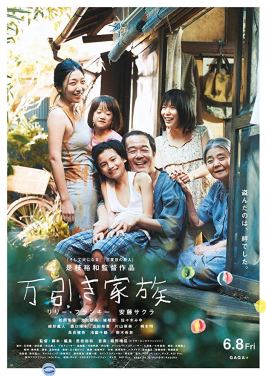 name is just Shoplifters. I like the Japanese title better because this superb movie is actually about an ensemble performance. The one line description they give for this movie is pretty good: “A family of small-time crooks take in a child they find outside in the cold.”

I’d like to celebrate this wonderful film just a little. Then I’d like to think about the “family” designation. And finally, I want to trace out one of the subplots. I saw this plot when I saw the movie. Kind of. I saw all the pieces of it and I knew they were related, but it took a night’s sleep and a longish bike ride to put those pieces in place.

This is probably the place to say that if you don’t want to know what the movie was about, to me, at least, you should stop reading now and go see it yourself.

I want to say it is a coming of age story featuring Shota (Jyo Kairi), sitting on his “father’s” lap in the picture. I know there are other plots there, but this is the one that matters to me most.

Hatsui, (Kirin Kiki) is called “grandmother;” Osamu (Lily Franky) and Obuyo (Sakura Andô) are called “Dad” and “mother.” and when they take on the abused girl, Yuri, the younger members are encouraged to call her “sister.” Shota (Jyo Kairi), the only boy in the family, doesn’t want to and he also doesn’t want to call Osamu, “Dad.” Yet.

So it is a “family-like” collection of people using family-style names for each other and, frankly, behaving in very generous family-like ways toward each other. In order to highlight how good their treatment of each other is, no good standard families are shown at all. The standard families shown are terrible families, especially by comparison to this “family.”

Shota looks very young sometimes and sometimes much older. I’d guess he is supposed to be 13 or 14. We are introduced to him as the first shoplifting exercise is being conducted. This exercise is really cool. There are secret hand signs and something that looks a little like an incantation. There is a distraction by Osamu and Shota sticks some things in his backpack and they both go home to eat whatever he has stolen from the store. 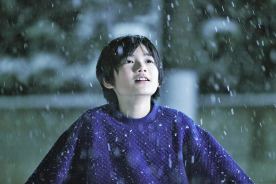 I mention that detail only to show how attractive it is. The grocer is either oblivious or too stuffy to care. He is seen only in the background. In the foreground are a father and son team, also a master and apprentice team, who are out rustling up dinner for the family.

Two elements undercut this tenuous reality as the story develops. One is the rationale provided by Osamu to Shota. The reason why what they are doing is not wrong is that the food in the store doesn’t belong to anyone yet. If someone had purchased it and put it in a cart, it would, presumably, be wrong to take it out of the cart. Having been bought, it “belongs to someone.” [1] The other element is harder to pin down, but it rests on the idea that to us, the viewers, the the grocer is a nobody. He never appears in the foreground; he never says anything. He has no idea, apparently, that this family is stealing him blind.

The argument about why it is right to steal these goods is, as I indicated, pretty thin. But it gets worse than that. Later in the film, Osamu is getting ready to smash the window of a car in a parking lot and grab a purse from the back seat. “Wait a minute,” says Shota. “This clearly belongs to someone and it is locked in their car.” So not only is the excuse flimsy, but his “Dad” doesn’t apparently believe in it himself.

It is at that point that we realize that Shota has never really bought the rationale, but that

he has deferred to Osamu, as the apprentice defers to the judgment of the master. “I guess he knows something I don’t know,” Shota must be saying, “because this doesn’t really make any sense to me. You can almost see Shota’s esteem for Osamu shrink right in the scene and it is not long before Shota steals something so clumsily that he gets caught and you wonder, as you watch, whether these two events are related.

Furthermore, the grocer (Sosuke Ikematsu) isn’t the nonentity he first seemed, either. Part of Shota’s duty is to pass the shoplifting knowledge on to his “sister” Yuri, just as his “father” Osamu passed it on to him. And we see him teaching her the hand signals–as in the picture above– and the little dance with the fingers that comes just before a theft. But this time, as they are going out, the grocer stops him. “Don’t teach your sister to do that,” he says, mimicking the finger dance perfectly, and he gives Shota two sweets of some kind.

OK, this puts everything in a different light. If we had seen that initial shoplifting scene from the standpoint of the grocer, we would have seen him seeing the thefts and perhaps shaking his head sadly. He knows what they are doing, and he knows they really need the things they are stealing. The analogy occurred to me that it is like the old Israelite practice of leaving the corners of the field unmowed so that they poor could come and get food there. It is not a perfect analogy, but it’s not bad and it struck me forcibly when the grocer confronted Shota at the door. We realize right away that the story as it has been given to us is misleading in quite a few ways. This stealing is, in fact, successful by the compassion and generosity of the grocer.

It didn’t look like that in the first scene, but we know now that is always what it was. It isn’t cool anymore. There is not the slightest shade of Robin H; lrood in it any more.

Those two events bring Shota to a place where his way of life is no longer sustainable. If even Osamu doesn’t believe the excuses he has been teaching Shota, then they have no merit at all. And if the grocer, far from being the oblivious nonentity Shota thought, has, in fact, been feeding their family all this time, then continuing to steal from him is unconscionable.

And that is how Shota grows up. His first act of autonomy is to get caught stealing a bag of oranges. It was an act of conscience. It recognizes and transcends the grocer’s generosity. It rejects as un-genuine and unacceptable the excuses his “father” has been peddling. He makes his own choice; no more deferring to the master. And with that choice, the whole edifice of “family” comes crashing down.

The Shota narrative is, as I say, only one of the subplots in this complex and engaging film, but it is the one that drew me first and strongest.

[1] The obvious flaw in this is that the grocer had to buy it before he could sell it. These items didn’t just happen to be on the shelves.