It is the practice of the senior center where I live to have a Vespers service on Sunday afternoons. It’s a very sensible thing to do because some residents who have spent their whole lives “going to church” really can’t go anywhere anymore and having a service they can attend is a good thing to do.

Mostly, we get speakers by asking current and retired pastors in the area to come in and give a short homily and conduct a brief, but otherwise familiar, worship service. Lately, the Vespers Committee has been supplementing this pool of local pastors with residents who are or were clergy. And once during my time here, they asked a resident who wasn’t even clergy.

That was me. I really enjoyed it and I hoped I would be asked again. Yesterday, the member of the Vespers Committee who is responsible for arranging the speakers called me in considerable distress. The speaker for tomorrow’s Vespers service is ill. Would I consider substituting for her with so little notice? And at the beginning of Advent, too?”

Yup. I would. I love Advent. I changed the Blogging Year so that it started with Advent. We decorate our Christmas tree according the Matthew’s birth narrative one year and according to Luke’s the next year. I post essays on Advent every year just for the pleasure of exploring some new idea that has occurred to me. Would I consent to speaking at a Vespers service about the birth story of Jesus? I would pay for the chance to do that.

So I sat down and wrote this. As I re-read it, I find I still like it. I won’t preach it. This is the well from which I will draw when I preach. And I will say some of these things and not others and I will say some things that occur to me in the moment, but that would not have occurred to me had I not taken the time to sit down and write this.

The homily is supposed to be 10—15 minutes. I might have to press that just a little. There are so very many things about Advent that I would like to say. So I will say some of these and I will leave room for new things that come to mind. I can hardly wait.

Here is the written version of the homily. What it will actually be, I have no idea.

“Who comes to Bethlehem and who does not?”

We live in such an individualistic culture that we can fall into thinking that Bethlehem when Jesus was born there was like a destination resort. You decide to go and then you book a ticket and get on a plane and go. But it wasn’t like that. To go to Bethlehem to see this very special child, you have to be invited and you have to say yes.

the story as Luke tells it. I began to fall in love with these stories when I began to honor how different they are. “The Christmas Story” as a mashup of the two real stories never meant very much to me. [Here is an example of the mashup.  We have Joseph and Mary following the star to the town where they have to go to pay their taxes.  Right.]  When I learned that there were two versions, I learned to love both of them. Matthew’s story, taken all by itself, has a very stark structure; there is nothing cute about Matthew’s story. Luke’s story is glorious and cuddly and warm, which is why four out of five Advent songs are taken from Luke, rather than Matthew.

But today, I want to use the cast of characters that both Matthew and Luke provide. This will cause Bette to roll her eyes and cause my friends to be astonished at my sudden lack of sophistication, but just for today, let’s borrow from both stories.

The Wise Men came from a very long way away, so I would like to honor them by looking at their story first. The Wise Men are my personal favorites because they are academics. They saw the star at its rising and they studied their charts. Astronomy, which we honor very highly today, and astrology, about which many of us have our doubts, were still one single discipline. They knew the stars, so they knew when there was a new star. The stars had meaning to them, so they knew what this star meant and they headed for Jerusalem as fast as they could go.

There are pictures of the Wise Men following the star in order to get to Jerusalem, where Herod, the king, lived. On behalf of the Wise Men, my fellow academics, I would like to point out that they already knew what the capital of Israel was. It was Jerusalem. And they already knew that the king lived there. They didn’t need a star to guide them to Jerusalem. They weren’t stupid, after all.

“At Bethlehem in Judaea, for this is what the prophet (Micah) wrote: 6And you, Bethlehem, in the land of Judah, you are by no means the least among the leaders of Judah, for from you will come a leader who will shepherd my people Israel.’

But the scribes and Pharisees didn’t actually go to Bethlehem. Nothing in the way they received the glorious news the scriptures gave them was anything like the delight with which the Wise Men received the news the star gave them. Herod didn’t go either, of course. He did send soldiers later, to kill anyone who might have been the Messiah, but he was too late.

The Wise Men did go, though, and no sooner had they started out than the star—that 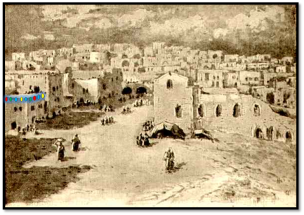 same star they had seen those years ago—appeared again and it led them not only the remaining five miles to Bethlehem, but stopped moving and stood still in the sky right over the house where Joseph and Mary were living. As you see in the picture, the star hovered in the sky right over the house with the Christmas lights, over there at the left edge of the picture.  [I share with you here the picture my son, Doug, created for me and that I use on every Matthew year.]

When the Wise Men got there, they knew what it meant to be there and they prostrated themselves on the ground before this very young King and they brought gifts that had wonderful symbolic power.

There is great good humor in the way Luke features the shepherds. It may not be strictly true, as some scholars have said, that shepherds were a despised class and that their testimony would not be admissible in any local court. But it is certainly true that they were ordinary working folks and there are no tenured academics at all in Luke’s story. I take real pleasure in the idea that God gave definitive proof of his intentions to people no one would believe anyway.

So the shepherds did what the Wise Men did. They went to see for themselves. They did 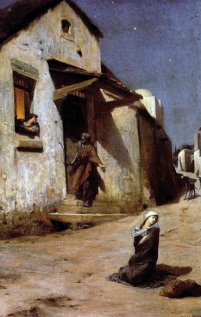 what the scribes and the Pharisees did not do. And, to return to Luke’s story, they did what the residents of the inn did not do. The people who already had a place in the inn—I mean, of course, the inn that refused to accommodate Joseph and Mary— had gotten there early. I don’t think they had reservations. They had had a meal and maybe something to drink. Maybe a lot to drink. The psalmist praises God (Ps. 104:15) for “wine that gladdens people’s hearts.” In any case, they were inside and outside it may have been cold or it may have been raining and if an angel had told them that the King of Kings was just being born in the barn [1] behind the inn, it would have been hard to leave the fire and go out and find out. So they didn’t. Or, if they did, Luke doesn’t know about it.

So, in these two little stories, stories about who came to see Jesus and who didn’t, we see what matters and what doesn’t. The Wise Men were carried to Bethlehem by the simple delight they felt when they looked at the star. And it didn’t matter that they were gentiles.

And the shepherds were out in the hills with their sheep, minding their own business, when an angel said that was a great and wonderful event in the little town just down there at the foot of the hills. Now these shepherds may have been devout Jews or not, but it is boring to watch the sheep through the long night and they wanted to go and see the sight the angel told them about. It didn’t matter that they were poor and unschooled, just as it didn’t matter that the Wise Men were rich and scholarly. They were invited. And they came.

The scribes and Pharisees in Herod’s court did not come. We don’t know why, but we do know that they served the King and interpreted the Law. That prophecy from Micah had been in their minds for a long time. And no part of their minds said, “Go and see for yourselves.” It is possible that the King would have disapproved, had they done so. It is possible that they would have looked foolish to the other experts in the law had they done so. We don’t know, really, but they didn’t go. These were the “observant Jews” so highly regarded in Jesus’ time and the shepherds were “non-observant Jews,” who really couldn’t afford the costs of being observant.

And the comfortable people at the inn—not to oversell the joys of overnights in wayside inns in First Century Judea—did not come either. It is one thing to leave flocks of sheep on a cold hill and go into town and another to leave a fireside and food and go out to the barn.

I say this not to blame anyone. I have no idea what I would have done. But the fact is that they didn’t get to see the King. The greatest event in their lifetimes was happening right next door, so to speak, but the demands of jobs or of political influence (as in Matthew) of the comforts of fire and food and drink (as in Luke) proved too strong.

Advent is the season when all of as are invited, again, to come to Bethlehem to honor the King, who is, in addition, our Lord. I pray that this year, we will be vigilant and refuse to allow anything to keep us away.

[1]  In English, the literal meaning of the word “bastard” is “born in a barn.”  That observation will probably not make it into the homily.