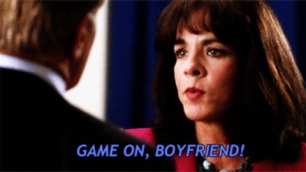 while. It isn’t a real debate, like the Season 7 debate between Matt Santos and Arnie Vinick. It’s more like T-ball, where Governor Ritchie of Florida, the Republican nominee, places the ball on the T and President Bartlet knocks it out of the park. Time after time after time.

There is a charming scene just before the debate happens. Here is the script of that scene, just to establish what happens. Then I’d like to move around a little bit, just as a fan, to enjoy it from another angle. You can come along if you would like.

BARTLET
…Remember the tie Josh had to give me at the last minute?

ABBEY
Yeah. I heard that happen. So, do you think there’s any point in still havng the debate?

BARTLET
There was a lot of juice in that tie. It was like in the last seconds. Just the energy getting me out on stage…

We’ll do mushy later. So, for now, I just got to say I love you so much that my head’s going to fly off. But, more importantly, game on, boyfriend! Let’s go!

By the way, I feel bad. I don’t think I’ve done enough to help you prepare for this debate.

BARTLET
Why are you telling me this now?

When Bartlet turns around to look back, Abbey pulls out a pair of scissors and cuts off his tie. (about three inches below the knot)

Bartlet looks down at his tie, then up at Abbey who has a sly grin on her face.

Bartlet runs out into the HALLWAY.

CHARLIE
Josh, we need your tie.

JOSH
What the hell?!

CHARLIE
Take it off!

BARTLET
My wife cut it off with scissors.

BARTLET
I don’t think we have that kind of time, Josh.

“We don’t have that kind of time!” I loved that.

It isn’t an explanation, which is just as well, because an explanation wouldn’t help anyone, even Josh. C. J.’s question is perfectly natural—C.J. can see the the tie has been cut—and the answer is short enough to use even while everyone is rushing around frantically. Josh’s question leads in another direction entirely. It brings long therapy sessions into view; deep explorations of the First Lady’s psyche. That is what there is not “that kind of time for.”

But that isn’t what caught me this time. Go back up to the dialogue, starting with “Remember the time…” All the time the two are facing each other, Abby is holding a pair of scissors in her right hand.  We can’t see it, but once she uses it, we know it was there all along.

She sees no contradiction at all between the scissors (and what she plans to do with them) and ironic comments like, “So…do you think there is any point in still having the debate?”

There seems to be no contradiction in her mind between the scissors and the emotional and apparently heartfelt proclamation, “We’ll do mushy later. So, for now, I just got to say I love you so much that my head’s going to fly off.” She delivers that line with an intensity that is a real problem for a viewer (me) who knows she is holding the scissors and what she is going to do with them.

And her “apology” for not doing enough the help him prepare is just the verbal context for what she is about to do with the scissors. And when you understand that—when you know what she is about to do as you watch her deliver that line—the contrast is amazing.  It’s enough to make anyone a Stockard Channing fan.  Or at least, an Abby Bartlet fan.

And worst of all, it works. The superstitious panic we see in Jed’s remarks, and which has been a feature of the episode up to this moment, has been disabling. He is relying on “the old stuff.” Abby simple deprives him of “the old stuff” and puts him into a panic that serves him very well in the debate.