There is a criticism implicit in this picture that I think is largely unfair.  It could be a lot worse.  She could be dressed like a showgirl and her hope could be placed as stupid rather than, as here, as wistful. 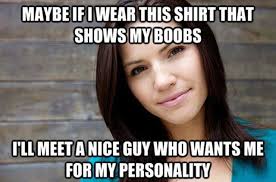 On the other hand the person who put this together and posted it—I am going to refer to him as the Snark [1]—sees physical attractiveness (my boobs) and attractiveness of character (my personality) as mutually exclusive and that makes me think that he doesn’t really understand the situation.

First, I think that the Snark has a grievance.  He thinks of the upper and lower parts of the statement as in conflict with each other and he is blaming the woman in the picture for embodying that contradiction.  There is no way of knowing for sure which side of this contradiction he himself would prefer to encounter.  I’d guess, based on word choice and syntax, that it would be the physical part.  Here is why.

The word choice is “boobs.”  Synechdoche, we call it, using the part to stand for the whole.  I’m pretty sure he has physical attractiveness in general in mind, although we are a strikingly breast-conscious culture.  There are other anatomical terms that are even cruder and which are used to stand for the woman as a whole and he didn’t choose those.

But “If/then” is pretty severe.  It links one condition (only) to one outcome (only).  But the circumstance where anyone chooses clothes for one and only one purpose is quite rare.  It is much more common for people to match the clothing to the occasion.  We say, “This is the kind of outfit people ordinarily wear to….” and when we are going there, we wear that kind of outfit.

It would be fair to ask the creator of this poster how he thinks a woman should dress for the purpose of attracting a man who will value her personality.  It needs to be something you can see from across the bar.

I’m going to get a little critical myself in just a little bit, so let’s just specify a few things to help me stay on track.  Let’s imagine that he is thinking about  “meeting a nice guy” in a bar.  There’s no reason it couldn’t be a church or a PTA meeting or a bookstore coffee shop.

And let imagine further that the women are in this bar to meet men and that they dress “appropriately.”  They want, in this scenario, to “attract” men.  What happens after that is entirely up to them because they get to say yes or no to whoever is attracted, but if no one is attracted, there is nothing to say.

And finally, let’s imagine that whatever it is that “attracts” from across the room, is not some nuance of personality.  God may indeed look upon the heart, as God told Samuel, but a man looketh upon the outward appearance pretty reliably.

I’d vote for confidence and competence.  How does this look to you?  It looks to me as if

she knows what she’s doing and has every confidence that she is doing it right.  In the whole middle range between too little and too much, I think looking like you know what you are doing, what you want to happen, is going to work.

I called this essay attraction and engagement, because I see those as step one and step two.  The Snark sees them as simultaneous and also as contradictory, but I don’t.  To me, it seems perfectly natural that a woman would dress in a way that would attract a man who would want to sit down and talk.  And if he wants to buy her a drink—presuming he hasn’t drugged it—that’s fine, too.  And if, as they talk, he gets more and more engaged by her personality, more attracted to the cognitive and emotional parts of who she is (and not just the physical part), then I would say that the “contradiction” the Snark has given us has been dealt with.

So here’s the story I said I was going to close with. I told this story in a post on July 17, 2014.  I have hyperlinked the essay in case you want to see the context, but here is the story I wanted to tell.

I want to finish with a story about two students of mine at the University of Oregon.  Jeff is one of my heroes.  The story goes that his friends and her friends decided that Jeff and Laurie would be a really good couple, so they started pushing them together.  One night, Jeff went over to the house to pick up Laurie.  In the meantime, Laurie’s friends were upstairs helping her “get ready” for her date with Jeff.  Her friends pushed her repeatedly in the direction of clothes that were—borrowing Kristine Cranley’s categories—too loose, too tight, too low, or too high.  Laurie was feeling really uncomfortable when she went down to meet Jeff for the first time.

They sat down and talked for a little while.  Finally, Jeff said, “My friends thought it would be really good for us to get to know each other.  I’d like that, but I don’t think I can get to know you while you’re wearing that.  Would you mind changing?”  By that time, Laurie had begun to resent her friends for pushing her so far toward immodesty and to regret her own timidity in refusing to tell them no.  For these reasons and several others, she was delighted that Jeff had named her problem as his problem too.  He wanted to know her so much that he gladly passed up an evening spent with a dazzling woman wearing way too little.  It was her he wanted; not “that.”

I don’t think we can count on responses like Jeff’s, which are oriented clearly toward the personality side and refuse to be diverted by the boobs.  No reason not to be attracted by them, of course, but if finding out what this woman is like is your goal, then you need to keep moving on toward the goal.

So, let’s un-Snark the situation and just celebrate the people who are attracted, and then engaged.