My place or yours?

It’s not what you think. [1]  The “places” I am thinking of have to do with memorial services.  Bette and I have just come from a service at our church, celebrating the life of a dear woman.  We had just the kind of service she would have wanted, but it brought into sharper relief a question I have been turning over in my mind for a few years now.

The question is about how to imagine a memorial service and it takes the form of “my place or yours?”

I began planning my memorial service with nothing more in mind than that I wanted to be thoughtful about it; I wanted the service to fairly represent the kind of person I was. 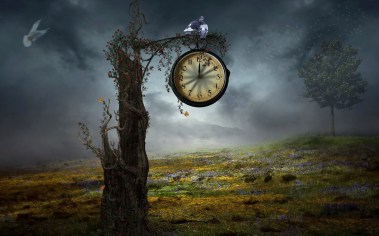 You can go a long way with no more of a head start than that, trust me.  You can start by rejecting the saccharine anecdotes that so often show up at memorial services.  These very often misrepresent the guest of honor and they also imply a closeness to the person or a degree of insight that are palpably false.  I didn’t want that.  I was attracted particularly to the prospect of these pigeons crapping all over my life clock.

I wanted something that was more nearly “true.” [2]  So, moving away from simply rejecting the saccharine anecdotes, I imagined something like a tapestry, which would be much more vivid a representation of a person’s life because it would have the dark parts as well as the bright parts and the bright parts would be vivid and beautiful the way the one grove of maple trees is beautiful in September when it is set in a whole hillside of dark green Douglas Firs.

I still like the idea of the mixed dark and light—I have had plenty of both in my life—but then I got to thinking about who I would ask to relate those dark parts.  And I imagined how I would feel if a friend, having just that sort of notion about his own memorial service, asked me to describe one of those dark parts in his own life.  I would probably do it out of friendship, but I would dread it for months ahead of time and having to do that would dampen my experience of what would otherwise have been a rich sharing among friends.  I wouldn’t like that at all.

I also liked the idea that this mix of dark and light might provide a sense of invitation of people who knew me in ways other than the “official ones,” the ways being featured at the memorial service.  That was one of the things that came forcefully to me at my friend’s memorial service.  I knew her in ways that seemed, maybe only superficially, to contradict the “official biography,” on which the speakers all seemed to agree.  I didn’t want that to happen at my service.  I wanted at the very least a safe hiding place for people who knew me differently than the way I was being presented.

I am in the process of jettisoning that view, but in doing so, I am seeing better how I got

there in the first place.  In Orson Scott Card’s series, there is a book in which Andrew Wiggin (Ender) serves as a Truthteller.  It is true that he has extraordinary resources for finding out what the truth actually is, but it is also true that in the instance we get to see in Speaker for the Dead, people realize as they hear him speaking that these are truths they knew already.  They had been exercising a great deal of restraint to keep these truths out of their own consciousness and out of the shared public awareness—but they did know these truths already.

That was enormously appealing to me.  What a tagline for my last event!  “Let the truth be told.”  Except, of course, the form “Let the truth…” is passive and if someone is actually going to tell the truth, it will have to be active and I don’t know anyone with the resources Andrew Wiggin has.  And the alternative, assembling a group of friends, and passing out the several areas where “the truth” would have to be told, really isn’t an adequate alternative.

It doesn’t really provide “the truth;” only as much truth as the several speakers can scrape up.  And it doesn’t meet the needs of the people who would have assembled to celebrate my life and to affirm the part each of the others had played.

It was at that point that I realized that I wasn’t the customer.  Hello.  Was that so hard?  What I have is a bunch of friends [3] Who are grieving for themselves and for each other and who are celebrating the parts of my life that they want to celebrate.  And there may even be a few who are thinking about their own memorial services with mine in mind and I wouldn’t object to providing an example that brought a little clarity to that project.

So…all is well.  I have arrived at the place where I can ask a much better question than before.  I call that progress.  The fact that I have no good idea how to begin answering that new question is a small matter, compared with spending a lot of time on the wrong question.

I foresee difficulties, of course, but they are not mine to solve.  The people who attend my memorial service will have the same constraints that the people who assembled to hear Andrew Wiggin had.  As they simplify their image of my life and my character [4] they are going to realize that there are some truths they have always known and have not admitted that they knew.  I know that sounds ominous, but some of these truths are going to be really positive.  Others, not so much.  And as they prepare to share what they know with others, they will have to distinguish between the truths that are important only for them to hold and those that are also important to share.  I liked this picture because it is about everyone who is bereaved, not just the people who are being reaved of me. [5]

But, as I say, that is their job, not mine.  I wish them well. I hope my memorial service meets their needs and I hope, if Bette is still living, especially that it meets her needs.  But nothing I plan is going to do that and I need to let it go.

As the master, in one of Jesus’ best stories, told the field hands who wanted to go through the field and take out all the weeds, “That’s really above your pay grade.”

[1]  Although I did have the pleasure of running on Portland’s famed Wildwood Trail “with” a woman who was a Nike employee and who was wearing a tee shirt that said “My pace of yours?”  I couldn’t come anywhere near running at her pace—hence the quotes around “with”—but every time I saw her coming, I would start to laugh and eventually, we stopped and exchanged names and for years afterward, greeted each other as we passed.

[2]  Which, now that I think about it, is a strange position for me to take.  The question of what is “true,” has, as I have said for a long time, no bottom to it at all, and we must learn to settle for what is useful.

[3]  I was going to say “former friends” on the grounds that since I am not here anymore, “we” are not currently friends, but the visceral meaning of “former friends” was just too strong and I had to give it up.  Except here, of course.

[4]  These are not “untruths,” they are simplifications.  You clean out the inconsistencies unless those are what you want to spend your slice of the public time on, and you refine a clearer image, so you can share it.