I had never heard of Nitsuh Abebe before he wrote this piece. In fact, I had failed to notice that the New York Times Magazine carried a feature every week called “First Words.” Since “First Words” is about language and politics—two of my favorite topics in the world—I am amazed that I have been passing it by.

So with this piece, I am advertising to everyone who reads this blog that Nitsuh Abebe is a writer worth paying attention to and I am reminding myself never to miss another Sunday offering of “First Words.”

Since I started with the link to this column, I know you will read it for yourself if it catches your interest. In the remainder of this essay, I would like to pull out a few of the things that struck me particularly and comment on them.

Here is the one I think is most important.

It’s often argued that this makes our conversations increasingly polarized, dogmatic, intolerant of complexity and logically sloppy. It’s less often pointed out that this might be because they aren’t really “conversations” in the first place.

That brings us to the question, “If they aren’t conversations, what are they?”

This attitude feels like part of a culture-wide push toward a kind of wartime moral clarity and passion — a desire to cut through all the airy deliberation and sophistry and “for argument’s sake” considerations of a seminar conversation.

And how on earth did we come to such a pass. I think there are two elements involved. Abebe describes one of them as the radical expansion of the old chat rooms.

If you’d arrived on the internet in the ’90s, you’d have found many of its conversations playing out in places like Usenet groups, mailing lists and message boards — dork-friendly forums where debates had a habit of continuing, at tedious length, until they’d exhausted every possible rhetorical approach to the subject at hand, like a never-ending, dysfunctional undergraduate seminar with no professor and no purpose beyond, literally, the sake of argument.

And somehow, we got from this series of small dork-friendly forums to to “a gigantic city square teeming with protests and counter-protests.”

They turned all speech into public pronouncements, and thus all conversation into a strange form of activism, part of a zero-sum battle over which ideas will find a foothold in our collective attention. In the midst of an information war, to express any opinion, sincerely or not, is seen as giving it space and therefore material support.

And then Abebe nails it by imagining someone in the middle of a march of some sort and holding a sign that says, “What if One of Our Demands is Unwise?” I love that. I might just be that person. This sign is as good as that, but it has some of the same lightheartedness that would be scowled at in a setting of “wartime moral clarity and passion.”

So this change, which Abebe says is an issue of infrastructure, is one of the changes. The 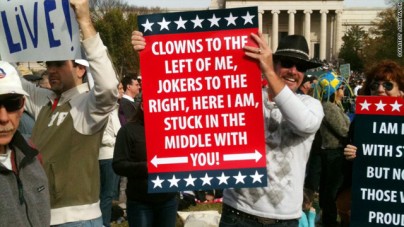 other, which he does not deal with, is a little more complicated. I’ll pick two elements out of the mix. The first is the continued stagnation of buying power. Beginning around 1972, the economic prospects for nearly everyone in the middle of the income distribution stopped rising and started shrinking. This was followed in due time by the sense middle class Americans have, and that was duly recorded in the opinion surveys, that they expect that their children will face even worse economic times than they themselves have faced. The old idea that things are getting better, seems to have gone away.

So that’s how we got here. What does that mean for us? It means that “wartime moral clarity” has taken over in peacetime. We are no longer citizens debating the best way to solve our common problems. Now we man the barricades against “the mongrelization of America” or against “a rising tide of bigots and haters.”

And if we are all “manning the barricades,” what happens to the techniques we used to use to put an argument into a different perspective? These techniques are now, for all practical purposes, acts of war. Here are some I heard about first from Abebe and I will start with the two I had to look up: sea lioning and gaslighting.

“Sea-lioning” is a type of Internet trolling which consists of bad-faith requests for evidence… the purpose of which is not clarification or elucidation, but rather an attempt to derail a discussion or to wear down the patience of one’s opponent.

Under “wartime conditions,” you can image that any inconvenient request for evidence could be construed as a “bad-faith request.” So requests for evidence are, of themselves, instances of sabotage. We have the momentum of the cause to maintain, after all. [1]

“Gaslighting”—named for a 1938 play of the same name by British dramatist Patrick Hamilton—is:

“a form of manipulation that seeks to sow seeds of doubt in a targeted individual or in members of a targeted group, hoping to make them question their own memory, perception, and sanity.”

In the stage and movie versions, the goal is to make the patsy doubt his or her own memory and then the values that are associated with those memories. In internet debate, the goal would be only the undercut the argument by forcing people back to their own first principles, a level where our understanding of our commitments are apt to be weak and vulnerable.

Abebe highlights two techniques in the column. The first is “playing the devil’s advocate,” which, in peacetime conditions, could be presenting contrary information the main line of the argument. [3] Under current conditions of wartime clarity and moral fervor, you might suspect “bad guys”—you know, racists and sexists and ageists—of presenting their own views under the cover of “playing the devil’s advocate.”

The other one he features he calls “hand-wringing.”

A little more than a decade ago, around the same time online sentiment began to turn against the devil’s advocate, it also seized on a close cousin: the “concern troll.” If the devil’s advocate playacts disagreement with you for the sake of strengthening your argument, the concern troll is his mirror image, a person who pretends to agree with you in order to undermine you. The concern troll airs disingenuous worries, sows doubt, saps energy, has reservations, worries that things are going too far.

That’s my kind of problem. Propositions are made so broad and proclaimed with such vigor that I see that they will become both false and pernicious in no time at all. When I say that, I am accused of all kinds of things from mixed-species parentage to evil intent.

It’s hard to imagine what would improve this deplorable state of affairs. If we could go back to the mild-mannered chat rooms of yore, that would help and I am sure many have. But that solution is a good deal narrower than the problem Abebe suggests.

If some bone fide member of a group could stand up at the point when the general discussion is just about to descend into “wartime clarity,” and re-set the discussion so that discursive arguments are protected but sea-lioning is not, that would be a great help. But who would do that? [4]

Things do go that way sometimes. The Georgian period in England did, in fact, turn into the Victorian period. Behavior does, sometimes, go from lax and riotous to strait-laced and decorous. I would really like to think that those are not our only two choices.

[1] The Tea Party revolt against moderate Republicanism was not part of the original deal but the opportunity for it to develop presupposed parties with internally consistent ideologies.
[2] I remember vividly the challenge a self-proclaimed atheist put to a church I attended in Eugene, Oregon in the 1970s. It was the practice of the pastor, Gordon Crider, to give a short sermon and then sit down in a chair at the front of the sanctuary and invite any present to enter into dialogue with what he has said. This atheist demanded to be recognized first every Sunday because the question he wanted to ask was, as he put it, “logically prior.” If it is true that there is no God, then the other questions or comments the members might make were really beside the point.
[3] This is the function that was once the focus of the adage, “the exception that proves—that is, it ‘tests’—the rule.” Alas, that adage no longer means that.
[4] Articles on the evolution of morality talk about the persistence of altruistic punishment. There are people who are so serious about seeing the rules of the game followed that they are willing to pay a price themselves to see that the game stays clean.