Two quick things. Yes, this is Easter Sunday. [1] No, this isn’t about the resurrection appearances of Jesus, except, perhaps, analogically. This is about the movie, Michael, and John Travolta plays the reappearing angel, Michael.

Quinlan (William Hurt) flatly denies all of the events that have made up the movie up to this point, including a very real romance between him and Dorothy Winters (Andie McDowell). Here he is denying it all to his buddy Huey Driscoll (Robert Pastorelli) who experienced it along with him.

Quinlan.: As far as I’m concerned, it never happened.[2]
Driscoll: But we were there. We saw it.
Quinlan: No. Never happened.
Driscoll: So…where’s your raincoat? (he gave it to Michael)
Quinlan: [this is my summary of his position] It never happened and you know why? Because if it happened, I’d have to believe that wonderful and unaccountable things could happen to me for no reason at all. And I don’t want to believe that. I refuse to believe that such things are possible. So I resolutely deny what you and I both saw and lived for all those days.

But on Thursday, after our Maundy Thursday service at church, I was feeling…oh…quiet, I guess. So I got out that last section of Michael to watch it again and this time I saw much more than ever before. I saw Quinlan “seeing” Michael after Michael’s death and I saw his emotional response to that seeing and I saw the changed behavior that resulted from it and I followed it all the way to the denouement, which is “true love,” the closest Hollywood ever gets to Life Eternal.

And that’s what I want to tell you about. This is not about who is seen; this is about what happens to the see-ers.

Quinlan becomes a (temporarily) changed man under Michael’s care. He allows himself

to really care about Dorothy, for instance, and “opening Quinlan’s heart” is why Michael came to earth this one last time. But, it turns out, that all that was contingent on Michael’s actual presence. We learn that because when Michael dies, Quinlan snaps back to his old cold self almost instantly.

So if Michael is here on a bet—that’s what he tells Quinlan—then either he has lost the bet or he hasn’t won—yet. Quinlan says to Driscoll that what they both saw happen couldn’t possibly have happened because if it had, he would have to believe that “things” would unaccountably and without any initiative from him, simply fall into place. The example he uses is that a car carrying the woman of his dreams would pull up to where he is walking and get a flat tire. Ridiculous, right?

This is Quinlan’s sober careful thought; his way of distancing his mind from all the conflict. And that has been “working” for him.  He has continued to live the thin flat life he has gotten used to.  If you call that “working.”  Except that as he leaves the bar, he thinks he sees Michael walking down the street in front of him. This is an instant dilemma for Quinlan and I feel very much in debt to William Hurt for making that dilemma show up fully in Quinlan’s face. “It never happened,” is a great position in a bar with a friend who knows why you are doing what you are doing, but out in the street alone at night, you see someone who looks very much like Michael wearing something that looks very much like your raincoat.

“It never happened” has no more chance of success than Thomas’s “Unless I can see…I refuse to believe” as he stands there confronting the risen Jesus. So Quinlan calls out to Michael and starts walking quickly down the sidewalk toward him. Michael picks up the pace. Quinlan begins running; Michael stays ahead of them.

Not to break the suspense or anything, but what Quinlan wants more than anything is to see Michael again. What he needs more than anything is to have his heart opened to Dorothy. [4] Quinlan doesn’t know that is a possibility; the viewers don’t know it is a possibility. But Michael does and whether he is dead or alive—or whether, with angels, it matters at all—he is still trying to win his bet. He is not willing to go home until Quinlan can go home and “home” for Quinlan requires Dorothy. 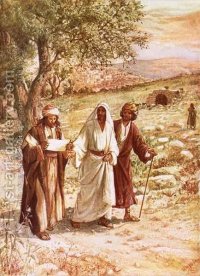 The next scene requires just a little context. My all time favorite of Jesus’ resurrection appearances is his walk to Emmaus with two of his followers. They spend a long day on the road with him and have no idea who he is until at the evening meal, he broke the bread and handed it to them. Suddenly, they knew what must have been true all day.
Back to the movie. Quinlan is now is full pursuit and he round the corner and runs into Dorothy. They are both startled. Dorothy starts, “I thought I saw…” Quinlan says, pointing back the way he had come, “He came that way.” Dorothy responds, pointing back the way she had come, “No, he came that way.”

Quinlan has been fuddled. We saw that clearly in his conversation with Huey Driscoll at the bar. And now he has been unsuccessfully chasing a ghost who is wearing his raincoat through the streets of Chicago. But even in that condition, Quinlan understands that no one could have been simultaneously leading one person east and another person west.
So we might say that Michael is “present” again. He is present to Frank, at least, for he looks longingly at Dorothy and says, “I love you, Dorothy.” On the third time he asks her, she consents to marry him. [4] He puts out his hand and she takes it and he says, “Let’s go home.” And now that he has Dorothy, he actually has a home.

So Michael wins the bet. And as Quinlan and Dorothy walk like lovers crossing the street and going home, Michael peeks out of the alley where he has been hiding. And Pansy Milbank (Jeane Stapleton) who has been Michael’s ally through all of this and who died much earlier in the film (see footnote 4), steps out with him.  And Michael holds out his hand and Patsy takes it, and he says, “Let’s go home.”

It is exactly what I wanted to watch late at night after the Maundy Thursday service. Maybe I’ll watch it next year, too.

[1] And this year, it is also April Fool’s Day. I think that is the perfect pairing. It gives everyone a choice.
[2] All the time he is saying this, he is eating sugar cubes and they show us Huey noticing that he is doing it, but he doesn’t say anything. The joke is that Michael had the world’s absolutely worst sweet tooth. He poured sugar on his Frosted Flakes at breakfast. The joke for us viewers is that we get to celebrate Quinlan’s saying it never happened as he is doing something he would absolutely never have done otherwise.
[2] So again, the distinction between what we want and what we need is illustrated. We can only think what a disaster it would have been had Quinlan been able to catch up to Michael, which means he would not have collided with Dorothy.
[3] And this is Andie McDowell’s star turn. She knows that Quinlan needs to really open himself to her and his first attempt—“Marry me.”—doesn’t do that. So she says no, while everything else about her body and her face conveys yes. And she does that twice. Two of the most enticing no’s I have ever seen.
[4] Director Nora Ephron plays on the idea of being “really here” or not from the beginning of the movie. Here, for instance, is the scene where Quinlan, Driscoll, and Dorothy meet Pansy’s friend, Michael, the angel.

Pansy: Do you see an angel?

Dorothy: I don’t think I do.

Pansy: Then how could I be with him?

Quinlan: Well, we don’t know exactly how it works with angels.

Pansy: How it works? If he’s in the room then you’re with him. If he’s somewhere else, then you’re not.

Dorothy: [very hesitantly] And that’s why we can’t see him now? He’s not here.

Pansy: Are you impaired in some way that I haven’t noticed, Miss?