I just don’t get Halloween. Not as a big deal celebration. I get a few things.

I get the language underpinning of it. I know, for instance, that the -een of Halloween is properly “e’en.” In the Scottish version of the word it is a contraction of “even,” still meaning “evening” rather than “eve.”

I get the notion of a liminal time—a time of the year when the borders between the living and the dead are thin and permeable. [2] Such a border means that “they” are closer to us and we are closer to “them.” Whether that is a good thing or a bad thing depends on your views of the relationship between the dead and the living, so it varies quite a bit among cultures and faiths.

If, for instance, “they,” the people on the other side of the border that separates the living and the dead,” are active and inclined to be mischievous, I can see why placating them would be a prudent thing to do and a big part of Halloween is about that.

I get the attachment to the annual cycles of death and rebirth. The autumn is, after all, the time of year when the sun is going away—and who knows whether it will ever come back north—and the plants are all dying.

On the other hand, all these understandings have declined quite a distance from their earlier meanings. Often, when we say things like, “declined from their earlier meanings,” the implication is that we have substituted later meanings. That is not true in this case. In the case of Halloween, the customs have declined from the spooky earlier meanings to no meanings at all. Of course, “no meanings” doesn’t mean “no reason.” The commercialization of Halloween insures that there are lots of reasons to push the celebration of it. I’m thinking of the costumes, the cards, the candy, the paraphernalia. [1] And Bette says that a lot of people have a lot of fun at Halloween, dressing up and going out for candy and so on. I never did, so I really wouldn’t know.

And while I don’t begrudge anyone a bit of special holiday fun—provided I don’t have to do it myself—I belong to a related but different tradition. And for reasons that have nothing at all to do with the secular celebration of the holiday, it is a tradition that has come to mean a lot to me.

In my tradition, the “hallow” of Halloween is a big thing. It means “holy.” Most Americans probably know it as a verb because that is the way Abraham Lincoln used it in the Gettysburg Address: “we cannot hallow this ground.”

If we are to think that the boundary between the world of the living and the world of the dead is stretched thin at this particular time, I can’t think of a better way to honor that thinness that than to honor those who have left us but whom we still hold in our hearts. The “dying” or “dozing off” of nature in winter suggests it. Pope Gregory III suggested it in the middle of the 8th Century. [2] The practice of many cultures outside the culture of the church, suggest it.

If there is “another side”—something on the other side of the threshold, it matters a great deal how a culture imagines what is there. Is it the spirits of the ancestors, watching kindly over their progeny? Is it the spirits of the ancestors, angry at being dead and waiting only for the thinning of the barrier to come back and wreak havoc? Are there beings that were never human—fairies, ogres, dryads—who have intentions of their own if they can just get back among the living?

There is a lot of such speculation—all of it implicit—in the modern celebration of Halloween. That is, in fact, what the fire theme is for. It accounts for the “lantern” part of the Jack-of-the-Lantern. [4] The fire is supposed to scare the spirits away. On the other hand, it also accounts for the food themes because the food is supposed to appease the spirits, on the off-chance that they are inclined toward malice. And, to add the last little bit of historical setting to it, if you were approached in the “trick or treat” mode by a Druid priest, you might want to think seriously about what a Druid might think a “trick” was.

At my church, the tradition is to hold a reading of the names of the saints who have died since the previous All Saint’s Day. A name is read and a bell is tolled. Then another name; another tone. From the time my wife, Marilyn, was diagnosed with cancer, we expected that we would have only a few All Saints’ Days left to us and we sat in church as the names were read and the bells tolled and held hands and cried. On the All Saints Day after she died, I sat there and listened to her name being called and the bell being tolled and cried by myself.  It was bitter, but the context of meaning made it tolerable. 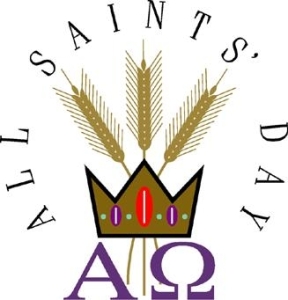 So I don’t really object to Halloween. It’s just, as I said at the beginning, that I don’t get it. I do object to conceiving of that time as a time for appeasing malevolent spirits and warding off angry minor deities. I don’t want to be any part of that. [7] All Hallow’s Eve, on the other hand, makes perfect sense to me and offers a great deal of comfort.

[1] How many innocent pumpkins, for instance, have given their lives to become jack-o-lanterns so they can simulate the ignis fatuus, “the foolish fire?”
[2] We don’t use liminal (from the Latin limen) straight up, but it is common in compounds like “subliminal.” A limn is a threshold.
[2] The reference of the author of 2 Timothy may have had something like this in mind (1:16—18) but given the lack of context, it is hard to say for sure.
[3] These people didn’t become saints just by dying. Here’s a good summary of the broader meaning of the terms from http://www.gotquestions.org, a site I like a good deal. “Christians are saints by virtue of their connection with Jesus Christ. Christians are called to be saints, to increasingly allow their daily life to more closely match their position in Christ. This is the biblical description and calling of the saints.”
[4] I almost hate to tell you this, but they didn’t always use pumpkins. Sometimes they used rutabagas and I really like rutabagas.
[5] I don’t mean by that phrasing to say that there is something “on the other side.” I have no idea. But at the beginning, my sense of “no longer here” was so strong that it virtually stipulated some “…and now there.”
[6] I’m not forgetting Bette. I’m just skipping over her because according to our deal, she has to live longer than I will. It just isn’t right to expect a man to marry and lose two such women in just one lifetime.
[7] On the other hand, I fully believe that people can be killed by witchcraft in cultures that believe in witchcraft. People are psychosomatic unities. We don’t come in two packages, one universal and the other local.