I invented this Albert Peterson, but there are thousands of these people in the U. S. and additional millions who hold Peterson’s combination of interests and responsibilities and who, therefore, are forced to ignore or to deny a good bit of today’s reality.

My goal for today is to define the difficulty Mr. Peterson is in and to extend my sympathies. If he and I were having a discussion about the U. S. and the future and about what is needed for the long-term health of our homeland, I think I would get angry at him and say things I shouldn’t. But sitting here at my desk on a beautiful fall day, I have nothing for him but sympathy. [2]

Mr. Peterson makes his contribution to his company by keeping labor costs low. There are three ways to do that. You can automate production, export the jobs to Third World countries, where the wages are low, or pay American workers Third World wages. All those work and they are all used. And there is nothing about Peterson’s job that impedes his making to his company the contribution he can make, which, again, is to “reduce labor costs.”

But, of course, by doing the things he is doing, Peterson is doing quite a few other things as well. You can’t do just one thing. That’s not how it works.  The strategies he is pursuing also “have particularly negative impacts on the labor market prospects of men and degrade their marriage-market value.” Specifically [3] the effects include:

“diminishing their relative earnings—particularly at the lower segment of the distribution, reducing their physical availability in trade-impacted labor markets, and increasing their participation in risky and damaging behaviors.”

As you can see in the footnote, this paper was once called “The Labor Market and the Marriage Market.” What Peterson would do, if he could, is to affect the labor market—thereby preserving his company’s profits—without affecting the marriage market. But, apparently it doesn’t work that way, so Peterson is forced to do both or neither.

These events, which the three scholars refer to as “exogenous labor demand shocks,” do, in fact “degrade the marriage market value of these men.” That is, they make them less likely to marry. The “shocks” do not make them less likely to procreate, however, and it was this point that Clare Cain Miller’s article addressed. Marriage is becoming, as she says, “yet another part of American life reserved for those who are most privileged.” [4]

But leaving the class boundaries—her way of talking about privilege—alone, here are some facts she has collected from current research.

Just over half of adolescents in poor and working-class homes live with both their biological parents, compared with 77 percent in middle- and upper-class homes,

Thirty-six percent of children born to a working-class mother are born out of wedlock, versus 13 percent of those born to middle- and upper-class mothers.

All these trends are Mr. Peterson’s doing. None of them are things he intended and none are things he applauds. But when “the marriage market value of men” declines—and that is the effect of Peterson’s work—then these social effects follow, their influence on the lower classes being especially powerful.

These effects are not inevitable. People could choose otherwise. People like Peterson—and here I join him—wish that they would choose otherwise. But, in fact, women will continue to hold against men their inability to provide for a family. And why shouldn’t they? And these women and men will continue to make babies anyway, whether they can afford them or not. More single moms, more broken homes, more social stress, more incarceration, more cost.

Mr. Peterson is a social conservative, which means that he believes in the value of

This is a dance with a predictable conclusion. Even the choreography is familiar. It isn’t that there is a contest, something like arm wrestling, between Good Guy Character and Bad Guy Necessity. There are moments when, in the short run, it looks like that. But in the long run, the behaviors that used to be implied by “good character” are redefined and the needs to which “economic necessity” is tied are also redefined. So now the economically required behaviors violate only “what was once considered virtuous by traditionalists.” And there goes the old Good Guy v. Bad Guy contest that sold so many tickets.

“Character” is a tough sell. I saw a cartoon once that shows a man watering the plant to the left of his front porch, but not the plant to the right. His neighbor asks him what he is doing. “I want that plant to grow,” he says, pointing to the one he is not watering. “But,” objects the neighbor, “You are only watering this one.” “I know,” says the man with the watering can, “But I want this one to grow because it wants to grow.”

And that is the character problem. Without quite saying that what we call “good character” at any given time is an artifact of economic relationships, it is a fact that “good character” is forced to swim upstream against the economic current, and it gets tired and stops swimming upstream. The salmon has no choice, at this point, but the society does. It can decide that “these days,” downstream is a much more realistic direction. And that is what we have done.

But don’t despair. There is hope.There are all kinds of government programs that would help cushion the blow. Clair Cane Miller lists these commonly cited five, but there are many more, including much more basic ones.

Social scientists suggest more routes to good jobs, like through community colleges or apprenticeships. More affordable housing for young people would help, so they don’t move in together simply from economic necessity. Inexpensive and accessible contraception would help, too. Some have suggested expanding the child tax credit, and removing the marriage penalty for benefits like the earned-income tax credit.

But now we must return to Mr. Peterson, the political conservative. As a businessman, he 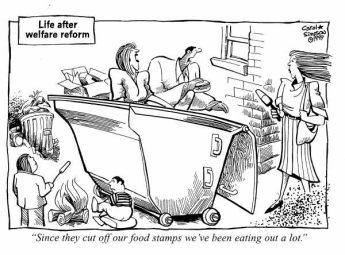 “degrades the marriage market value of the men.” As a social conservative, he deplores the destruction of intact families and the production of children that no one seems to be able to care for. But now, as a political conservative, he also opposes the government programs which could soften the impact of the economic difficulties and ease some of the social costs of postponed marriages. There really isn’t anywhere else to go.

Mr. Peterson may very well prefer that extended families or charitable organizations work with these broken families. He may very well oppose the substitution of government aid to these families for what should have been, in a better world, private aid. He may very well oppose the higher taxes that will be necessary to give meaningful help to as many men as have seen their jobs exported. But that is really what he is down to and that is why, now that I am writing about him instead of arguing with him in person, I have such sympathy.

There is really nowhere for him to go. He can’t stop replacing high wage workers with low wage workers (or even with much lower wage machines) and if he could, his replacement couldn’t. He can’t change his view about what kinds of families are to be preferred—those values are very deep in the way he sees the world. He can’t even imagine that assistance on the scale that is required will be provided by patchy private initiatives. A thousand points of light would not be nearly enough. And he can’t in good conscience agree that the taxes and the government programs that could cushion the blow and better than doing nothing.

Mr. Peterson is in a very difficult place. He’s not a hypocrite. He’s just stuck.

[1] The name, but not the circumstance, comes from Conrad Birdie’s agent in Bye Bye Birdie. The woman who wants to marry him, if he would only give up show business and become an English teacher, has fantasies of being :Mrs. Phi Beta Kappa Peterson, the English teacher’s wife.”
[2] Literally nothing. I have, for instance, no solutions for him except ignoring and denying reality and he is already doing those.
[3] This article, “When Work Disappears: Manufacturing Decline and the Falling Marriage-Market Value of Men” by David Autor, David Dorn, and Gordon Hanson, was cited in the New York Times article. It was first circulated under a much better title: “Th Labor Market and the Marriage Market.”
[4] I really don’t like the dramatic phrasing. “Reserved?” Really? By whom? “The privileged?” Do you really want to define everyone above the 50th percentile (the definition she uses for comparison) as “privileged?”
[5] This is not a personal choice. This is the mandate of whoever holds Peterson’s job. If he were to decide, perhaps on grounds of social conscience, that he was not willing to take the actions that produced so many bad social consequences, then he would be replaced by someone who wouldn’t mind quite so much.