I want to reflect a little today on Alyx Amber, [1] who is currently Facility Services Coordinator at Holladay Park Plaza, where Bette and I live. She is also Miss Portland 2017. I put her name in the first sentence because I want to start with Roger Federer, for reasons that will become clearer as this essay takes shape.

I was happy for Alyx when she won the Miss Portland competition and headed off to Seaside, Oregon to compete for the Miss Oregon title. But it never occurred to me that I wanted to write anything about it; to share Alyx’s journey with you. That happened when I was listening to an interview with Roger Federer, who at age 35, has just won the men’s singles title at Wimbledon.

That is going to sound a lot like Alyx Amber before I am finished here, but let me give you a little Roger Federer first.

How does this sound, for instance?

Sometimes you’re just happy playing. [Sometimes] you have to go back and think, “Why have I started playing tennis? Because I just like it. It’s actually sort of a dream hobby that became somewhat of a job.”

When I was at a crossroads in 2004 and became world No. 1 for the first time, I thought, “Ok, do I want to stay there, or just enjoy the ride and see how long it lasts before it fizzles out?” I decided I would love to squeeze more of these moments and play the right way with the right mindset and the right flair, but also with fair play and also to represent the game well, which is very important to me.

Or this, from his post-finals interview at Wimbledon?

“…my heroes walked the grounds here…and because of them, I became a better player.”

Alyx doesn’t play tennis at all, as far as I know, but she understands the relationship between competition and life, between the journey and the destination, in a way that sounds like Federer. Alyx has great respect for the other people who are competing for the prize that is just as important to them as it is to her.

That’s not how she became Miss Portland 2017, but it may be how she was able to enter the competition with such a positive attitude. Does this attitude sound familiar at all? Below Alyx meets at the Seaside competition with friends from Holladay Park Plaza; from left to right, Auzhanae Upton, Latricia Jones, Xasha Upton, and Debra Jones. [3]

“On June 26, I will depart for Seaside, Oregon where I will compete for the Miss Oregon title one last time. I will compete with 19 other incredible young women whom I admire and am proud to call sisters. I have gained so much from this program not only personally, but educationally as well.

Alyx wrote that for the Plaza Review, our in-house newspaper at Holladay Park Plaza. That means not only that she approached the competition with a very positive attitude, but also that she wanted to share the experience with a lot of people at a senior center, all of whom probably think that if there had been any justice, she would have been chosen Miss Oregon.

Tonight was incredible and this first picture truly captures the evening. I am so proud to be the 2nd runner up to Miss Oregon 2017, Harley Emery. I have walked away from this week with thousands of dollars in scholarships, the love and support of my family and friends and some of the best memories of my lifetime. Thank you to everyone who made this journey possible. 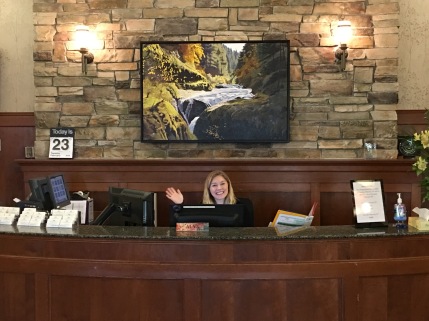 e front desk at the time and I was checking out Holladay Park Plaza to see if maybe Bette and I wanted to move there. I remember thinking that the lobby looked like the lobby of a really good hotel and I remember thinking that the woman behind the desk looked like she belonged in a really good hotel. I had been touring senior centers at the time and I had never visited one that caused that thought to come to mind. I liked it.

And as I was getting ready to take this shot, I asked Alyx if she would wave to me. I thought it would give some human perspective to the shot and would serve as a focal point. Alyx didn’t have any reason to do what I asked. I didn’t know her and she didn’t know me. But she gave me this wave and the smile that went with it. I was not surprised to see, last week when I first saw this picture, that she has that same smile. Here, it’s under a crown, and I think that adds a little something to it, but it’s the same smile. It is not, in other words, a “beauty queen smile;” it’s just Alyx.

Colluding with your competition

“I will compete with 19 other incredible young women whom I admire and am proud to call sisters.” That’s the way Alyx sees it. Note, for instance” “compete with.” I think I want to call that an attitudinal preposition. Mostly, you hear “compete against,” and although there’s nothing wrong with that, it points to a different attitude toward competition. “Compete with” means something different.

It is true in the Miss Oregon competition, as in the Wimbledon competition, that one will win the prize and all others will not. But Alyx told me that the women who had to change costumes quickly as part of the contest were helped out by the women who had the time to help them. The others—the “competitors”—laid out the clothes and helped the women on tight schedules get into them. “Compete with” allows that; “compete against” does not.

I was surprised to hear that there was so much cooperation among the contestants, but this wasn’t just a few unusually helpful women. Alyx said this is the way the whole competition was organized. The Miss Oregon pageant is under the leadership of two people, Stephanie West and Teri Leeper, who have an idea what a collegial and fulfilling competition would be like. It wasn’t like that in the past, when the women competed more aggressively against each other. So there was guidance from the top. Furthermore, Alyx was one of a group of women who had been in these contests for several years and were able to provide some leadership to the women who were there for the first time. “O.K., girls, “they would say. “Here’s how we do it in Oregon,” and go on to describe the elements of “competing with.”

It could be argued, I suppose that the goal of being Miss Oregon is so valuable that it would justify even an abrasive and bitter competition to win it. But if you can organize the competition so that both the journey and the destination are things to celebrate, why wouldn’t you? 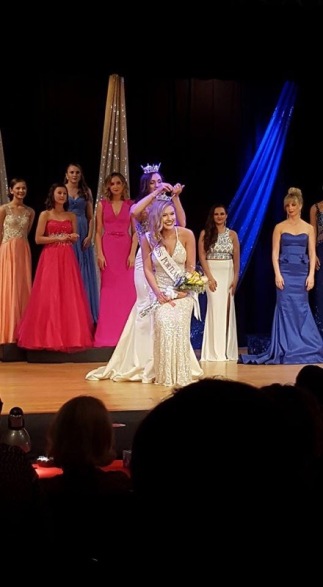 personally, but educationally as well,” she is talking about the experience she has had. She is talking about the “journey” part of the competition, about the friendships with the other contestants, about all she learned about presenting herself, about, about taking a leadership role in making the contest what it was. These are things that she gets to keep no matter who wins. And when she won the Miss Portland crown, she crowned the journey with the destination.

Why I care about this topic

I would care just because I like Alyx and wish her well. That would be enough. But it is also important to me because I live here at Holladay Park Plaza where Alyx works and it will not surprise you to learn that there is a good deal of this same generosity and helpfulness here. I see a direct relationship between the kind of magic that transformed “compete against” into “compete with” in the way the staff relate to the residents here.

Here where Bette and I live, someone sits down with the staff and says something like, “Now remember, this is the way we do things at HPP. To make this the kind of place we promised to the residents, we have to keep it clear in our own minds.” Here’s an example. Alyx and her friend Debré Jones (far right in the picture of Alyx and friends at the contest) were explaining the relationship of staff to residents one evening last March. See the context of that discussion here.)

“You live here,”[Alyx] said, meaning me in my resident status, not me personally. “We just work here. It’s your home and we need to make it a good place for everyone. We do that, by putting the interests of the residents at the center of our concern. We want you to have the kind of life you had in mind when you chose Holladay Park. That’s our job.”

When I think about what that means to me, I almost think it gives me some insight into what it might feel like to be one of a group of “competitors” all of whom are helping each other be their best selves and do their best work. I do see the differences, of course. Because I am not a fellow competitor with Alyx, I don’t have the opportunity of returning the favor. It will never work out, the way it did in the contest, that she helps me when my time in tight and I help her when her time is tight. It isn’t like that.

On the other hand, it can be like that, apparently, among the staff here. Consider this:

Since the moment I began working at the front desk I have realized that here at Holladay Park Plaza, we are family. The love and support that all of you have shown me in my journey to Miss Oregon has been overwhelming and sharing this experience with all of you is so special to me

That’s from an article Alyx wrote for the paper that all the residents read. If it is really possible for the staff to work toward making our home—the residents’ home—the place they promised, it would require a staff that feels like family. From a family like that, you could get the support and the presence of mind to do your job. To do your job, as Roger Federer says, “in the right way.”

That’s how Alyx does her job. It was a pleasure to watch her do it long before she became Miss Portland.

[1] Properly speaking, Alexandra Amber, but it says Alyx on the name plate on her desk.

[2] I had no idea that was going to be a significant date and I made no effort to remember it, but there it is on the calendar in the picture.

[3]  I saw Alyx going to a meeting here is a really terrific looking black dress.  “Oh,” she said, “it’s Debré’s.  We’re the same size and the front desk people are pretty close.”