I have, in mind for today a tactic to help me watch movies. I ran into it in biblical studies, where it is called “inclusio.” [1] I’m going to spend a little time on what this technique is, but let’s look at a movie first. The movie I have in mind is Their Finest, which either a dispiriting tragedy about a woman who leaves her husband, finds a true love, only to see him killed right before her eyes or a bracing tale of a talented woman who persists at her job until her real worth is recognized.

Both plots are there, but the movie can’t be “about” both of them. What to do? There are two early scenes that offer beginnings to this story. In the first, a [2] loutish husband sends his wife off to make enough money to pay the rent. In the second, a group of British moviegoers watches a truly terrible propaganda movie in a theater. If the last scene matches one or the other of those in the way a second parenthesis “matches” the first, then I would say that inclusio is in play and decide in favor of that theme.

Well it turns out that in the last scene, the writer attends a showing of her movie—the movie the making of which this story has been about—and finds people genuinely moved by it. Ending the movie there tells me something about where the director wanted the movie to begin. That last scene demands that the early propaganda movie, not the husband shipping his wife out to make the rent money, be understood as the first scene.

And that is the use I have in mind for inclusio. So what is inclusio? Most of what I know about it, I know from having biblical scholars use it. They identify instances of it and a plausible reason for it, but they don’t talk about what it is exactly and I will need to do that to use it for my movie watching.

In Matthew 5, there are the famous beatitudes. Two of them—the first one and the last one—end with “for theirs is the kingdom of heaven.” The goal of this device, according to the commentators is to identify the material between those references as a single body of material. It is identified as “a unit” by being bracketed with those identical clauses.

Matthew also use the device to bracket the whole Sermon on the Mount and the collection of actions that are grouped into a narrative following the Sermon. That is why, some scholars argue, Matthew 4:23 and 9:35 are nearly identical. Matthew 4:23 reads (in the New Jerusalem Bible):

He went round the whole of Galilee teaching in their synagogues, proclaiming the good news of the kingdom and curing all kinds of disease and illness among the people

Jesus made a tour through all the towns and villages, teaching in their synagogues, proclaiming the good news of the kingdom and curing all kinds of disease and all kinds of illness.

Nearly identical. They function like the first and second parentheses or the first and second quotation marks. I have been sensitized to that because I spend some time every week scanning documents and very often one of the parentheses makes it into the text, while the other does not. So when I find a left-facing parenthesis, I go back looking for the right-facing one, knowing that all the material between them is one kind of thing. When I identify that material by locating the boundary markers, then I go back and see if I can say what “it” is about.

Here’s a little pitch I found in Wikipedia and which I think is adequate for todays needs (the bold font is in the original).

In biblical studies, inclusio is a literary device based on a concentric principle, also known as bracketing or an envelope structure, which consists of creating a frame by placing similar material at the beginning and end of a section, although whether this material should consist of a word or a phrase, or whether greater amounts of text also qualify, and of what length the frames section should be, are matters of some debate.

I have described how I made some sense out of Their Finest Hour by treating the last scene as if it were the second parenthesis and therefore a clue to the “real” theme of the movie. I was very happy with that experience. On the other hand, it isn’t always a clear as that.

Let’s look at The Lovers with this same technique in mind. [3] Again, all the warnings about spoilers apply. I need to start with the whole film to try to explore how the first relates to the last. In the last scene, Michael (Tracy Letts) and Mary (Debra Winger) are arranging a sexual rendezvous by phone. They manage to seem excited and furtive at the same time, which seems odd to me and will seem odd to you, too, when I give you the background of the relationship. The first scene—which by the inclusio technique ought to me the mirror image— shows Michael trying to comfort a disconsolate woman: “Don’t cry, Lucy” he says. We don’t know who the woman is when we see this scene. 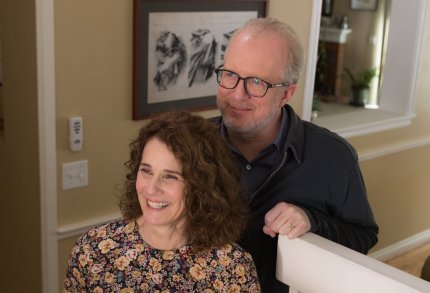 So let me tell you what the last scene means. Michael and Mary are lovers, which is just a little odd, since they just recently divorced and married other people. The people they married Robert (Aiden Gillen) for Mary and Lucy (Melora Walters) for Michael, were their lovers when they were married to each other.

This is not a movie about loving. This is a movie about cheating. In the middle of their boring and loveless marriage—and two boring and loveless affairs—Michael and Mary suddenly get turned on by each other. This urgent powerful sexual attraction is the only one the movie gives us. Neither of the affairs has anything like the power of this unexpected episode in the lives of Michael and Mary. Michael and Lucy are not like that; Mary and Robert are not like that.

So Michael and Mary divorce, their hot sexual attraction to each other notwithstanding, and marry their “lovers” as they had promised them they would. At which point, they carry on with their own torrid sexual relationship which is now an adultery. To do this, Michael needs to cheat on Lucy in exactly the same way he has been cheating on Mary; Mary needs to cheat on Robert in exactly the same way

So I think I would pick for the “first scene”—the one that serves as the key to understanding the narrative as a whole—the first scene where Michael and Mary are together. They are “together” in the sense that they are both in the screen at the same time, but they are not together in any other way. They are not as close as you would be to someone who lives in your neighborhood and whom you met unexpectedly at a shopping mall. The chance encounter would be warmer, more personal. The Michael and Mary scene shows only the most grudging of recognitions that there is another person in the room.

So that’s my choice for “first scene.” It is the left-facing parenthesis. I like what it says about the last scene, which, however illicit it might be, is also engaged and personal. And if those are the first and last scenes, then I get to say–using or misusing the technique of inclusio– that the movie is “about” the interpersonal relationship of these two people (Michael and Mary) who once had a nerve-dead relationship (though married) and who now have a rich and sexually engaging relationship (though adulterous).

The good news is that this technique offers a way of questioning a thematically complex movie to see what it was “about.” The bad news is that if the movie really won’t tolerate that treatment, people like me might use it anyway, just tucking in the corners as necessary.

[1] I have recently seen it called “inclusion,” but if it is a specific technique—and it is—I would rather give it a distinctive name.
[2] Their Finest is “comedy, drama, romance” according to IMDB. I guess you get to take your pick. The book was called Their Finest Hour and a Half—which I really like as a title—and was directed by Lone Sherfig.
[3] A “comedy” according to IMDB. It was written and directed by Azazel Jacobs.