Deciding to Eat Out

We all have values we say we hold and, as a subcategory, values we actually hold. [1] And these values, my values and your values, are very often the same, differing only in rank order.

“Only,” he says. Nearly all the disagreements I deal with on a daily basis are based not on different values, but on different priorities of values. The basic form of this argument goes like this.

A. Because it expresses value Y.
B. Yes, it does. But it denies (overlooks, doesn’t give proper appreciation to) value Z

A. What! You think value Z is more important that value Y? How could you think that?
B. Ummm. Is that really a question?

So that’s how it goes. Familiar? 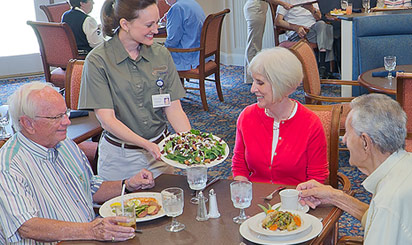 If none of those is familiar, I urge you to stop reading right now and go to the New York Times opinion column by Sarah Vowell, which has one of the best opening lines I have seen in a long time:  “Greg Gianforte doesn’t represent this state. O.K., he does now, but you get what I mean.”  This is not a picture taken at Holladay Park Plaza.  We use tablecloths.

So I live at Holladay Park Plaza in Portland, Oregon, a retirement center that uses a meal credit system. I know that sounds drearily institutional, but it isn’t, so let’s go on. I get 30 “meal credits” a month as part of my monthly service fee and have never—yesterday began my tenth month of living here—used them all. This is a problem of major proportions IF a very high value is “using up all the meal credits.”

So let’s consider what that would look like. I’m going to make fun of it a little. You won’t be able to tell from this account that I do recognize it as “a value,” but just take my word for it that I do. It is the 25th of the month and I have 10 meal credits left. [3]

A. I’ve got a great idea. Let’s go down to Portland Center Stage tonight and see the play about Astoria. (Can we have dinner here before we go or after we get back? I’ll go with you to the play if and only if we can also use a meal credit._

B. Great news! My son Dan is in town and wants to buy us dinner at Acadia. (Can’t do it. We have to eat here until the meal credits are used up.)

C. Hey, the Obamas have invited us to join them at a fancy hotel on the Oregon coast. They have been reading my political blog posts and want to give me an award for sedition and disruption. (Are you crazy? We’d miss at least three meals here if we did that and it’s already the 25th of the month!)

You get the idea.

The idea that organizes the other end of this artificially constructed scale can be mocked as well, of course, but I am not going to do it. The other end is that you should do with your mealtimes what you want most to do with them. That would look like this.

A. The “special” is braised yickerd greens [4] and hog jowls tonight. I’ve got a great idea. Let’s go out for pizza. [5]

B. We’ve been looking for a chance to get together with the new residents from just down the hall. They are free tonight and I have made reservations for the four of us. Does that sound good?

C. I really want to see the movie downtown. I know we could go to the 2:30 showing and that would enable us to get back in time for dinner here, but wouldn’t you really rather go to the 4:30 showing and have the whole afternoon free?

If you start at that end, which seems only reasonable to me, you choose to eat at home [6] whenever you want and to do something else whenever you want. Doing it that way does have a penalty. It means that you are not maximizing your use of the monthly allotment of meals at the retirement center. On the other hand, it means that you get to choose what you want to do every night at dinner. Eating in or out depends on what you want to do—which seems to me the right standard for choice—rather than on an artificial standard like 30 opportunities a month.

I have heard it argued that doing it my way wastes a valuable resource: money. That is

true in the narrow sense. We have paid for those meals and that money is gone. You don’t get any back by not eating all thirty meals here. Getting a refund really would be “saving money” but that’s now how it works. On the other hand, when you set aside what you would really rather do, you are also wasting a valuable resource and you don’t get those opportunities back at the end of the month either.

I really think that there is room for discussion if you consider every occasion when you might make the decision on the basis of one rule or the other. There is another development that sometimes occurs, however. One “rule” or the other become a recognized part of a person’s character. When that happens, the actual decision I am making is only an artifact of my character—the traits I identify with myself and that I expect friends to identify as part of me as well.

Now it turns out that there are not good names for the character traits that go with the decision rules. People who try really hard to use all the meal credits sometimes refer to themselves—pejoratively, but with good humor—as “cheapskates.” I have never heard anyone—even me and I am the person most likely to try it—give a name to the trait at the other end of the scale, but if I were to try one, I think it should be “hedonist.” [7] A hedonist would be a person who manages the choices based on what would be most pleasurable. In the second series (A, B, C) each of the choices was made on that basis. You could also justify some more demanding choices on hedonic grounds if it was the right thing to do (which is pleasurable, in a sense) and especially if you would condemn yourself for failing to do it (which is distinctly unpleasant.) [8]

If the choices I made are to be embedded in my personality, so that I am expected by those who know me, to make choices based on a well-known standard—“Isn’t it just like him to…”—I would rather not use a standard that I market as being a cheapskate; I would rather be known as a hedonist. For one thing, the outcome of the cheapskate rationale is always the same. Use 30 meal credits a month. But the outcome of the hedonism rationale could vary a good deal from one circumstance to another.

To me, it’s just a matter of starting at the more important end of the spectrum and working back toward “cost-effectiveness” as needed.  But not more.

[1] Timothy Wilson (Strangers to Ourselves: Discovering the Adaptive Unconscious) has done some really interesting studies that correlate what we think we value and what our friends think we value.
[2] One of the great triumphs of consumer-driven capitalism is the formulation of the idea that paying less for an item is the same thing as “saving money.” There are times when it really is. If you have to have it, paying half as much leaves you some extra money. But if you don’t have to have it, you could save a lot more money by not buying it.
[3] I guess I should say that you lose any unused credits at the end of the month and that at the moment—they are working on a new system—you can’t share them with anyone else.
[4] Digging deep into family lore. My kids called any kind of vegetable they didn’t want to eat, “yickerd greens.” Just the green vegetables, I suppose.
[5] Not to sell my home, Holladay Park Plaza, short. In addition to that day’s special, there are five weekly specials, and a full buffet line (both hot and cold), any of which could be chosen instead of the daily special. Just in case you don’t like yickerd greens.
[6] “At home” includes cooking your own meal in your own apartment. We have not done that in our first nine months here, but there is no reason we couldn’t.
[7] Mostly bad connotations, I’m afraid. The the Greek is hēdonē, meaning “pleasure,” it derives from the earlier hēdys, meaning “sweet.”
[8] You could choose agency, which focuses on your making the choice yourself rather than having it foisted upon you by the implications of a rule you didn’t support. “I am an agent, so I like to make the choices” would be the rationale for choosing agent rather than hedonist.