Thy rod and thy staff…

That’s the way the psalm goes. It is Psalm 23, very likely the most famous psalm in the world. [1] I got to thinking about it the other day and, like so many other things I think about, when I get far enough away from it, I see new things. [2] The powerful truth in this exegetical advice has been captured by Yosemite Sam, as you see.

So today I would like to think through some of the most obvious, and therefore the

most likely to be overlooked, aspects of Psalm 23. First, it was written by a sheep. We will need an adjective or two here, so let me offer ovine (sheep-like) and pastoral (shepherd-like) as the most useful.

This sheep is a disaster as an author because he has the authorial viewpoint of the shepherd. He speaks, in other words, in his own voice, but he knows things that only the shepherd would know. Or, to use the adjectives I provided above, the voice is ovine, [3] but the words are pastoral. That’s not how they told us to do it in Writing 101.

So I would like to explore this discrepancy, but before I do that, I would like to apologize to lovers of Psalm 23 (although I am one) and to explain why the approach I will be taking, helps me. There is a way of understanding this psalm that takes its real world images into account. What, for instance, are rods and staffs used for? And, from the other side of the road, what images are supposed to be called to mind by the use of these words.

There is a danger, when you ask these questions, that you will come to care more about the answers than about the certainty of God’s care that the psalmist wanted to convey. That would be a wrong reading, it seems to me. But where there is danger, there is opportunity as well and the opportunity is learning to take account of the real world and the biblical allusions that his hearers would have understood instantly. With great effort, we can learn to hear these psalms in the way that even the dumbest Israelite would have been able to hear them and then we can appreciate them much more fully.

In short, although I am aware of the danger of substituting the study of the 23rd Psalm for the beauty of it or for the meaning of it, I think it is a danger worth taking. I hope very much that I will not take away form anyone what he or she most liked about the psalm, but this blog is a place where I think out loud and today I want to tell you what happened to me when I started thinking about it.

I am going to move past the lines “The Lord is my shepherd,” which sets the master metaphor for the psalm, and “he restoreth my soul,” which summarizes the sheeply benefits in a most un-sheeply way. So let’s go to the benefits this sheep celebrates. I have put the King James first and the New Jerusalem Bible in parentheses after it.

These are perfectly ovine preferences. Good grass is better than desiccated scrub and slow moving water is easier to drink from than fast moving and tastes better than stagnant water. Any sheep knows that and any sheep who associates these benefits with the leadership of the shepherd has every reason to be grateful to him.

The Failure of Pastoral Knowledge

We come now to the part where something in my mind said, “Hey. Wait just a minute.”

Thy rod and thy staff, they comfort me. (Your staff and your crook [4] are there to soothe me).

Any shepherd knows what any pastor knows: those under his care are often willful. They want what they want. Very often, they pursue what they want without reference to the dangers to themselves or to the rest of the flock. The shepherd, seeing that, would do what needs to be done. Apart from more spiritual considerations, these sheep are the source of the milk and meat and wool he relies on for his living. So what might he do?

Here I begin to rely on material from an African shepherd, W. Phillip Keller, who wrote a book called A Shepherd Looks at the 23rd Psalm. He knows more about rods and staffs than anyone I have come across and if I am to approach my goal of learning, through careful study, what the stupidest shepherd in Palestine took for granted, I can profit from Keller’s recollections.

We will begin with the staff because that is the picture that came first to my mind. Here is Keller.

The shepherd’s staff is normally a long, slender stick, often with a crook or hook on one end…The staff is also used for guiding sheep. Again and again I have seen a shepherd use his staff to guide his sheep gently into a new path or through some gate or along dangerous, difficult routes. He does not use it actually to beat the beast. Rather, the tip of the long slender stick is laid gently against the animal’s side and the pressure applied guides the sheep in the way the owner wants it to go…Being stubborn creatures sheep often get into the most ridiculous and preposterous dilemmas. I have seen my own sheep, greedy for one more mouthful of green grass, climb down steep cliffs where they slipped and fell into the sea.

Note: I did remove a sentence from that account. See the second ellipsis. It will return to us shortly.

The staff, you will notice is used “to guide the sheep in the way the owner wants it to go.” True as this may be, it is not, let me assure you, the experience of the sheep. Consider this line from that paragraph:

Being stubborn creatures sheep often get into the most ridiculous and preposterous dilemmas. I have seen my own sheep, greedy for one more mouthful of green grass, climb down steep cliffs where they slipped and fell into the sea.

I ask you now to consider the perspective of the sheep. There is a mouthful of green grass to be had and the sheep is greedy. Why not just stretch out a little bit—just a little bit—and get one more mouthful? That is what the sheep wants. The staff is what is preventing me from getting to that luscious bunch of grass. It is an impediment. If I am a sophisticated sheep, I might say it is an unreasonable or an unnecessary or an overly prudent impediment.

I don’t see any comfort there. The operation of the staff to keep the sheep from going 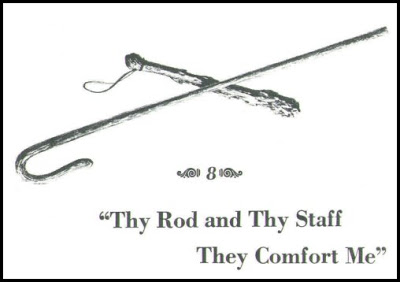 where its owner wants to prevent it from going—that makes perfect sense. I might go so far as to say that it comforts the shepherd. It does not comfort the sheep.

The rod is a little better, but it is a little like having a father who is capable of dealing out serious physical punishment. You might feel really good about that if you are in danger of getting beat up by others, but you have to know he is capable of that kind of punishment against you. You do know that.

The skilled shepherd uses his rod to drive off predators like coyotes, wolves, cougars or stray dogs. Often it is used to beat the brush discouraging snakes and other creatures from disturbing the flock.

And it was, furthermore, the instrument he used to discipline and correct any wayward sheep that insisted on wandering away.

So the comfort you take in the rod, as a sheep, depends on whether you think of its being used on you or on predators. I think that maybe ambivalence is the best I could manage if I were approached by someone with a clipboard and asked, “So…how do you feel about the rod? On a scale of 10.”

That’s how I think I would feel as a sheep. This particular sheep, the one who wrote Psalm 23, is a sheep who thinks like a shepherd. He’s an amazing sheep. I am not at all surprised that goodness and mercy follow him.

[1] I suspect that it is, in part, because it is only 122 words long (in the New Jerusalem Bible), while Psalm 119 is 2448 words long.
[2] I once had a brief enthusiasm for establishing this truth in a website to be called “Find ASIA.” The gimmick is that those four letters are so spread out on the map that you have to get some distance away to see the name of the largest continent in the world
[3] Baaaa.
[4] I’m not going there and I hope you will bypass it as well.