I know exactly how you feel

Well first, can it possibly be true? Can anyone who is not me know just how I feel? No. It cannot be.

But it can be largely true? Yes, and it almost certainly is. I am going to think a little today about why we choose the first answer more often than the second. (Hint: it isn’t because it is more accurate.) But first, let’s do a little cleaning up of the underbrush. 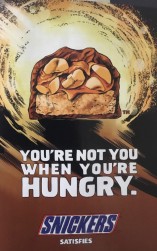 The first question we might ask is, “Do you know how you feel?” You wouldn’t know it from reading introductory psychology texts, but emotions don’t come with discrete labels. You feel what you feel, of course, but when you get around to calling it something, you are in the same mess anyone else is. It isn’t quite like the Snickers ad that assures us the we aren’t quite ourselves when we are hungry, but I think the truth is off somewhere in that direction.

When you are emotionally distraught for some reason and someone says, “I know just how you feel,” you might plausibly say, “Really? How do I feel?” [1] And the person attempting to reassure you offers some labels like angry or sad or happy or horny. You compare the words you have chosen to represent those feelings and compare your list to his and you feel quite justified in rejecting his understanding of you if the lists don’t match.But here’s the truth.  You are guessing just as much as he is. Maybe you ought to back off a little. There is no reason to think that the lists will match or, if they do not, that his is less accurate than yours.

But that’s not really what is pushing my button today. The diagram above is a way of thinking about which personal experiences we will claim as unique and which we will grant to be widely shared. The representation of what is widely shared—nearly everything as the yellow area shows—is the way community-oriented societies picture it. This represents both the fact of the matter and the ought of the matter; it represents how things actually are and how they should be.

In individualistic societies like ours, on the other hand, being unique is a highly desired status. It is, as I say a status; a recognized position. As a matter of actual fact, each of us really is unique, but that’s not what we are after. We want our uniqueness to be recognized. This has been apparent to advertisers for many years, of course, but you do notice it as the incessant drumbeat of uniqueness dominates the way we push products and services.

So what would it mean to be completely one of a kind if we are talking about an experience like grief? It would mean that no one understands what you are going through. You wouldn’t think that is a good thing. It makes you wonder why we demand it.

When someone says he or she knows how we feel and we, ironically or snarkily or

furiously deny that it is true, we are left to our own incomprehensible, unsharable grief. I was told by someone I asked about it yesterday that it was “an arrogant thing to say to another.” [2]

I argued above that no plausible mechanism exists by which I can say as a matter of careful determination that you do NOT know how I feel. I am arguing here that the terrible aloneness of grief is an artifact of our demand for uniqueness.

What would happen if we decided that the emotions we feel—what we call “private inner emotions”—are pretty much the same as those felt by others who have gone through what we are going through? A man whose wife had died could say, for instance, to another man whose wife had died, “I know what you are going through,” and be received warmly. “I know you do,” he might say in reply, “Isn’t it just horrible?”

Or he might say, “Does it ever get to the place where it doesn’t hurt all the time?”

Or he might say, “Did you do anything that helped you? I’m not having much luck with what I’m trying.”

Or he might say, “I know there are a lot of differences between the situation I am facing and the one you faced, but I take great comfort is seeing that you have emerged whole and ready to help.”

Those sound attractive to me.  I have benefitted, myself, from being on both sides of that experience and have been warmed by the generosity and the empathy of others. All that goes away when I say I would rather be incomprehensible than comforted.

Consider this, for instance, from Harry Triandis’s well-known Individualism & Collectivism. [3]  I am going to change his word “collectivism” in the quotation to “group-oriented.” It is a shame that “collectivism” is such a scary word in our time, but it is and I want you to be able to hear what Triandis is saying.

Identity among group-oriented cultures is defined by relationships and group memberships. Individualists base their identity on what they own and their experiences. Not surprisingly, the emotions of [people in] “group-oriented cultures” tend to be other-focused (e.g. empathy) and of short duration (they last as long as the [members] are in a situation). The emotions of individualists are ego-focused (e.g. anger) and of long duration (do not necessarily change with the situation).

One of the implications of this focus on relationships is that the range of common experience it imagines is quite large—I imagine your experience to be largely like mine—and the range of feelings thought to be appropriate is also large. And one of the implications of organization that Triandis calls “individualism” is that emotions are organized in terms of oneself (by ego-centered, he doesn’t mean egotistical). That means that there may be a good deal of payoff for rejecting the applicability of the experiences others have had.

Groups like Alcoholics Anonymous have, of course, defined the similarity of experiences by group membership. That’s what being a member means. The structure of rewards is reversed in an AA meeting so that the experiences of each are declared to be very much like the experiences of all. Members are said to take great comfort in this, but alcoholism is the ticket to membership in such a group.

Why would common humanity not be enough?

[1] I said it was plausible. I’m not recommending it. It has a belligerent sort of sound to it.
[2] And maybe it is. If we have organized our society so that “nobody knows how I am feeling” and that anyone who says he does in engaging in some form of oneupmanship, then maybe a gesture of this kind is arrogant. I don’t think it would have to be, but maybe it is.