From the outside, you enter the rotunda of the Capitol in Salem, Oregon from the north. As you stand there, you face the information kiosk, where I have seldom failed to get the information I needed—including current gossip when I was a regular at the Capitol. But if you raise your sights just a little, you find this quote incised into the marble over the entryway. 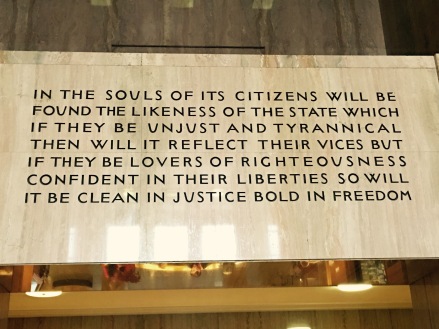 I was told, when I was a legislative newbie, [1] that all the quotations on the Capitol building itself were from Plato. That may be true. About this one, the closest I have come to knowing for sure is a footnote saying that this quotation “is said to be from Plato’s Republic.” And maybe it is.

For the purposes of imagining a conversation between the author of this quotation and James Madison, I am just going to refer to him or her as Plato. Here’s how that conversation would go.

Plato: The character of the people directly determines the nature of the state.

Madison: Actually, it does not. The size and organization of the state mediates between the two. Really, that is our only reason for hope.

That’s how I hear the argument. It has been hard for me, over the years I have walked under that quotation and often stopped to read it, to focus on what it actually means. I am so very much in love with the language! Who talks like that anymore?

But today, I am trying to get past how beautiful the language is and to notice that it says that the state—Plato was thinking of a city-state—will have the characteristics of its citizens. The Framers of our Constitution didn’t really disdain good character. In their minds, they filled up the national government with people who had such character. Madison calls them representatives “whose wisdom may best discern the true interest of their country, and whose patriotism and love of justice will be least likely to sacrifice it to temporary or partial considerations. “  Madison was a hopeful man in some ways.  On the other hand, in this description, he was trying to sell the Constitution to a skeptical New York audience.

Again, language so beautiful that you have to exercise some discipline just to attend to what it means.

But as beautiful as this account is, the Framers didn’t really count on character either. They counted on the system they built to buffer the bad character of the faction-ridden citizens and so ensure the stability and freedom of the system as a whole.

Does that look like a fundamental disagreement to you? It does to me.

So the Framers put their hopes elsewhere. They put their hopes in the architecture of the system. I have said it this way sometimes [3]. “The Framers no more believed in the goodness of citizens than Newton believed in the goodness of planets. Newton’s idea was that if the planets were of a certain size and density and velocity and a certain distance from each other, they would just keep doing what they are doing and no “intervention” would be necessary. That’s what the Framers thought about federalism, the separation of powers, and checks and balances.”

Actually, it was a longer lecture than that, but you get the idea.

Do you see an intentional “system” in the division of powers between the central government and the states? I do. And the 2-year, 4-year, and 6-year terms of representatives, presidents, and senators respectively? I do. And the careful distance maintained between one part of an action—declaring war, for instance which the President asks for and which Congress either does or doesn’t grant—from another? I do.

For Madison, pace [4] Plato, it wasn’t a matter of the character of individuals. It was a matter of the nature of civil society. Consider this imposing list from The Federalist #10:

Here’s how Madison sees it.

The latent causes of faction are thus sown in the nature of man; and we see them everywhere brought into different degrees of activity, according to the different circumstances of civil society.

A zeal for different opinions

These latter two have, according to Madison: “enflamed them with mutual animosity, and rendered them much more disposed to vex and oppress each other than to co-operate for their common good.”

Does anything sound familiar yet? But wait, there is more. Madison continues:

So strong is this propensity of mankind to fall into mutual animosities, that where no substantial occasion presents itself, the most frivolous and fanciful distinctions have been sufficient to kindle their unfriendly passions and excite their most violent conflicts.

This is what civil society is like according to Madison. This is “the nature of man” as it is played out in society. So it can’t be prevented. In fact, trying to prevent it would only result in a suppression of liberties, about which Madison says (still from #10) “It could never be more truly said of [this remedy]… that it was worse than the disease.”

And if it can’t be prevented it must be mitigated as well as social and political architecture can manage it. And that is, the authors of the Federalist Papers wrote in a series of editorials signed “Publius,” what we truly have in the proposed Constitution.

They despaired at the outset of the connection that attracted Plato, that good citizens

could produce a good state. They despaired also of forcing people to act as if they were good citizens, as if their own interests did not matter more to them than the welfare of the state. They settled on a system that would allow them to be as bad as they actually were, hoping that the long and torturous maze that confronted them would tire them out before they took over the government.

I think that is a lovely idea. It’s worked pretty well so far.

[1] I began my legislative years as a legislative assistant in 1983.
[2] If I could find the quotation, I could find it in Greek and find out if the word “righteousness” is dikaiosyne, as I suspect and which I have represented in my paraphrase.
[3] Many times, actually. This was part of my lecture on the structure of American government so 2500 students at Portland State, the only institution for which I have a careful count, certainly got this lecture.
[4] Latin reference common in some circles. It means “with peace toward…” whoever is named. Plato in this formulation. Some journals use  (against) in the same way as an indication of disagreement with the named scholar, but I like this one better.