“Jesus is the reason for the season.” Really?

There are so many ways for Christians to be unhappy about the way “Christmas” [1] is celebrated today. I have given it up, myself, in favor of Advent. It saves me so much grief. And why, really, should I expect anyone to celebrate my holiday when I don’t celebrate theirs? Really. 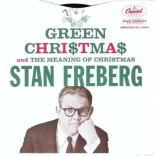 I remember when I first heard that line-Jesus is the reason for the season— and when I first saw it on a billboard. It must have been some time in the 1950s. Surely it was somewhere around the time that Stan Freberg wrote and performed Green Chri$tma$. [2] I was in my teens in the 1950s and America’s culture was in the middle of a post-WWII rebound. [3]

Obviously, I did not accept the messages my culture sent to me as characteristic of a post-war up-tick in conservative positions and sentiments. I took it as “what America is like,” or, really, “how things work” in the broadest sense of the term.

Clearly “Jesus” in the slogan is the alternative to the pervasive commercialism that Scrooge represents. So…Jesus, not shopping, is the reason we celebrate Christmas.

It is not, however, why we celebrate “the season.” Our forebears, Christian and pagan, worried that the sun, traveling further and further south in the winter, might not decide to come back this year. And when the sun “stands”—which is what the -stice part of solstice means—we could breathe a collective sigh of relief and begin to anticipate the sun’s northward journey. [4] And we would celebrate the anticipation that the present cold and dreariness will not be how the world ends, but that warmth and hope will return again.

That is “the season.” As Christians moved up into Europe, they very sensibly weighed the difficulties of cranking up a brand new festival as opposed to just hijacking a festival already in place. They decided that the celebrations of the winter solstice were a good time to celebrate the birth of Jesus, the Messiah, so they dumped Advent right on top of what Ursula LeGuin (in her Earthsea writings) calls “the festival of sun-return.”

So in Christian countries in traditional times, Christ was “the reason for the season” by virtue of the church’s mandate. No reason, after all, to turn away from figgy pudding if you don’t need to.

But then, starting early in the 20th Century, economies in Europe and North America began to rely heavily on consumer demand. The more occasions there are to sell things, the more things we can sell and the better off the economy will be. And after all, in Matthew’s account, the “Wise Men” did bring gifts to the Christ child, so why shouldn’t we give Barbies and Tonka Trucks to our own children? It may not be “the reason for the season,” but it is one of the things we do on Christmas day.

I still remember when “the season” meant “the Christmas season” and good taste required stores to hold off on the paraphernalia of Christmas until after Thanksgiving. I remember active opposition to stores who broke that taboo and “jumped the gun.” But more and more, “the season” has been defined as the time of commercial excess beginning shortly after the back-to-school sales are over.

That’s what “the season” now means. It means Halloween and Thanksgiving and Christmas. And “beginning early” now means beginning that season—roughly the days before Halloween —early. There can be no coherent “reason” for a “season” that begins in October and runs until January. It can be an extended time of appeals to customers, but there is no cultural coherence in that.

And when we have travelled that far, we are in a position to stop and notice the most outrageous word in the slogan. It is “the.” The definite article notoriously requires a single object. A polygynous husband may not introduce any of his wives as “the wife”—only as “a wife.” That’s just how English works.

And it works the same way, silently and imperiously, in “the reason.” There is, the logic demands, only one reason for this season and we are here to tell you what it is. This will be a revelation and a disappointment to the Druids who celebrated the return of the sun long before Christian missionaries arrived. It will sadden and impoverish a whole swath of merchants who see “the season” shrunk back to the days just before and just after Christmas. Both parties—the Druids and the Retailers—have a lot of reasons to reject the demand that the article “the” places on their reasons.

On the other hand, they have every reason to continue to pretend that there is such a season. A “let’s spend money” season would not be broadly appealing as a cultural meme, but “let’s celebrate THE SEASON by spending money” works just fine.

Last year, for instance, my Starbucks put a banner on the pastry case that said “Tiding so Delicious.” The only word in that banner that has a historical connection to the old celebrations of Christmas is “tidings,” as in the King James Version’s ringing, “good tidings of great joy.” This year there are red cups—they are being used now, still two weeks before Thanksgiving—that say “Share the joy.”

I would love to share the joy. How about I treat you to a grande egg nog latté?

So there is no “reason for the season.” Why would we ever have imagined there would be? There are lots of reasons why we celebrate the October to January period the way we do. And I still get my Advent to celebrate so I’m not complaining.

[1] “Xmas” in C. S. Lewis’s sarcastic account of how the winter solstice is celebrated in countries where commercial secularism is the basic assumption of society.
[2] Although he was a preacher’s kid, Freberg takes the religious argument in this parody only halfway. “But don’t you realize,” he has Bob Cratchit say to Mr. Scrooge, “Christmas has a significance, a meaning.” Freberg doesn’t go so far as to suggest what it is, but he does suggest that there is only one. Still, his little skit was banned on a lot of radio stations as impious.
[3] The role of women, the meaning of work, and the significance of “religion,” largely main stream Protestantism where I lived, were all explicit repudiations of the pre-war hedonism.
[4] When I say forebears, I am thinking of people living in the northern hemisphere. In the southern hemisphere, the solstice marking the shortest day comes in June.