It isn’t always what you want to do, of course, but it is probably something you always want to be able to do. In Abraham Maslow’s well-known hierarchy of needs, “fitting in” and “not fitting in” are adjacent goals. My University of Oregon mentor, Jim Davies, who was a careful student of Maslow’s work, used to say that we wanted first to be a part; having achieved that, we wanted to be 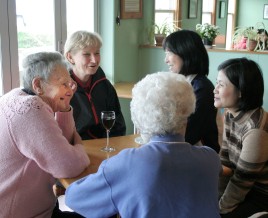 I’m thinking about the move that Bette and I will be making to a retirement center later this month. It’s a little like moving to a new school. You look around and see what clumps of people there are and you decide which group or groups you want to be a part of or that you don’t want to be a part of any group. [1]. I’ve never done this at a retirement center before, so I’m trying to anticipate, what the process will be like.

I’m guessing that there is a rough sorting of the residents by mobility. There will be people like me, who can walk out the front door and go anywhere within walking distance just by deciding to. There will be people who can walk a short distance if they are careful. Then there are the people with walkers and wheel chairs. Then there are people who need for someone else to provide the push for the wheel chairs. For now, I fit best into the category of people who can go wherever they want. I doubt that this category is also a group [2], but I am not opposed to starting with a category.

There will also be a sorting by mental ability in the very rough sense of recognizing other people and having conversation. I don’t know quite how those categories will shape up, but I very much hope that I will have access to people who like to read and think and talk and who are likely to remember on Thursday, the conversation we had on Tuesday.

When it comes to conversations, I know what I like, but I also know that you can’t always get what you like. And I know that knowing how to fit into a style of conversation that you would not have chosen is a very important skill. I practice that skill at our Starbucks nearly every morning. It I do it right, it will make me a part. There will always be time to set myself apart. 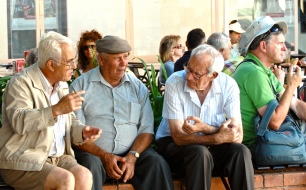 I am thinking, however, that there is a visual element to these groupings and the visual element is what I am thinking about right now. I know there is a tendency to get shabby and unkempt when you get old because no one actually cares about how you look. I don’t want to do that. On the other hand, I don’t want to turn suddenly into a clothes horse, which I have never ever been and which I would tire of. Bette could be a clothes horse if she wanted to; I’m pretty sure I wouldn’t tire of that.

But apart from “not grubby and not classy,” which is pretty broad, I am sure there are ways of presenting myself that will invite some people to want to know more about me. I already know that they will be presenting themselves in ways that affect me that way.

I recently wrote a very brief biographical statement, as the Director of Resident Services asks of all the new people, and I tried to tuck into it little indicators of who I am and what I care about. What I would like, from that little bio, is for some people there to read it and be interested in meeting me and for other people to read it and decide not to. I actually know how to do that with words. In this essay, I am trying to imagine how to do that same thing with how I look. As you can tell, I have no idea how to think my way through that.

I know this happens all the time in new settings. I know I am going to walk into the dining room and look around. I am going to see some people dressed as “we used to be teachers” or “we used to run businesses” or “we were stay-at-home moms.” And they are going to look at us, at “the new guys,” and make the same kinds of early decisions. Where is the Sorting Hat when you really need it?

What I will do if I don’t get any kind of a handle on this process, is just to continue looking, as we become part of the Holladay Park Plaza community, the way I look now and see what happens. There’s nothing really wrong with that, but if I could understand the process better, I could do something on purpose—and I love doing things on purpose.

[1] I discovered well after I graduated from high school that back when I was there, I was considered to be a member of “the smart kids.” More a category than a group, I regret to say, but even so, I would have appreciated knowing at the time, that people thought I belonged anywhere.
[2] I use the word category to refer to any collection of people who share certain traits. Left handed catchers whose mothers immigrated from Puerto Rico, let’s say. But a group is interactive. People know each other and choose their behaviors based on likely responses. That’s what I am going to mean, in any case.

1 Response to Fitting in