Generosity and the Discipline of the Market

This is another celebration of a remarkable Starbucks discussion. That is why I chose such an academic-sounding title for it; all that formality sounds like a celebration to me.  It was the kind of discussion from which the participants leave saying, “This is the only conversation like this I am going to be able to find all day.” Often that is what I say, myself, and I am nearly always right about that.

In my mind, the real topic of this essay is that conversations like this one do actually go on in our little corner of the Multnomah Village Starbucks (the Northwest Corner). Counting on those conversation is one of the major structures of my life. [1] But what I am going to think about today is one particular discussion.  Here are the usual suspects. Bob Nightingale, my good friend and my protagonist for this morning is the guy in the white beard.

It can be looked at in several ways. We will examine two of them. From my side of the table, it is about “subverting the discipline of the market.” I mean that ironically, as you might infer from the quotation marks, but I do mean it. Markets actually work and they don’t work by presupposing that all the participants will have good character. They work by presupposing that everyone is trying to make money.

On the other side of the table is Bob Nightingale. I can tell you what Bob’s perspective on this issue was, but in order for it to mean anything to you, you need to know a little about him. From Bob’s side of the table, the whole issue has to do with “small acts of kindness.”

Bob’s life contains the oddest collections of pasts of anyone I know. We met by comparing post-apocalytic science fiction stories, about which I quickly discovered he knew more than I did. Bob spent some very hard time on the streets as a young man, which I never did. He has a passion for theater, having built and lighted sets, acted, and directed, none of which I have done. He has skills for bringing warring parties together and he used them as Oregon’s state conciliator. Based on how much I have enjoyed the stories, I would have loved to see him in action. [2]

expression just this once—about any conversation that comes up. “You think that’s something,” he might be expected to say, “but I did this or that or the other thing, which is a lot better or more painful or more mind altering or something.” He could. But one of the things I like best about Bob is that he doesn’t do that. Ever.

There is a dry cleaner in Multnomah Village, just a block or so from the Starbucks and Bob has taken clothes there for years.  Bob recently took three shirts in to be cleaned. They were sent off to whoever does the cleaning [I’m going to call it “the factory,” just to have something to call it]…and never came back. Repeated inquiries have failed to locate Bob’s shirts. What to do?

Bob’s idea is that the value of the three shirts is about $100, so someone owes someone $100. Looking at the whole process as an economic system, it is not very complicated. The factory lost the shirts (or did something else with them), so they owe Bob $100. But Bob is not a party to that transaction at all. His contact is with the proprietor.  (Note to Seinfeld fans: It doesn’t have to be like this.) 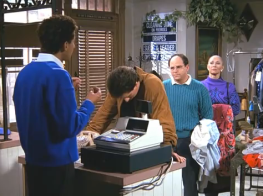 So the proprietor seems to owe Bob $100, for which he would be reimbursed by the factory. Except that the proprietor doesn’t seem eager to do that and Bob believes that pushing too hard on the factory—on which you rely for day to day business—is probably not a good idea for the proprietor.

Also, it is likely that the proprietor has insurance to cover events like this. Otherwise it would come out of his pocket. But it is also likely—Bob is speculating about all this, but it sounded sensible to me—that the deductible on the insurance was a good deal higher than the $100 that is at stake here, so it would still come out of someone’s pocket.

That brings Bob—not me—to the question of “who’s pocket?” And it is at that point that Bob’s “small acts of kindness” template kicks in. Bob said, “I can afford it a lot better than he can.”

That story establishes that Bob is a good guy. It does not establish that he is offering a good criterion. For what percent of commercial transactions could Bob say, “I can afford the loss better than he or she can?” Eighty percent? Ninety percent? Would anyone urge Bob to apply that criterion so broadly? No, of course not. Each person would find a way to limit the application of the criterion. To family but not friends; to retail but not wholesale; to local merchants but not online merchants; to people you like who are economically vulnerable rather than to people you don’t like, who are every bit as vulnerable.

So why would Bob’s vastly over-broad criterion apply in this particular case? That’s the first thing that puzzles me. The second is: are we really sure that the market will not, in this case,  work the way it is supposed to work? Let’s say that the factory cannot account to the proprietor for what happened to Bob’s shirts. That means they make good on the loss. If it happens several times, they find out why and fix it. There is no self-interested reason for them to investigate if the proprietor, the man Bob deals with, bears the loss each time, so it is in everyone’s long term interest for Bob not to take the proprietor off the hook.

that becomes one of several kinds of difficulty which causes him to switch cleaners. That’s the way it ought to happen. If you don’t do good work, the people who run businesses will find someone who does.

Or let’s say that the proprietor is the one who is being careless with the shirts or with the records he keeps on the shirts. Bearing the cost of his bad behavior might be just the thing to help him pay attention to what he is doing. Bob could always take his shirts to another cleaner. Again, that is the way it is supposed to work. You provide a good product or you lose customers. The market is not supposed to run on friendship or compassion.

So that was my argument. I probably lost. Bob’s willingness to imagine the best for the proprietor and to bear, himself, the cost of someone else’s sloppiness is so appealing that my much more reasonable case didn’t really have much of a chance. And I’m fine with that. It’s the discussion I get hungry for.

The other participants at Starbucks that morning contributed not so much by taking sides—there were only two sides to take—as by arguing about emphasis. Should Bob’s long experience as a customer (this is not a personal friendship) have as much weight as Bob is giving it? Isn’t it a mistake to trade the sere beauty of the market for the chaos that results when you try to introduce the sympathies that are more appropriate to friendships?

The truth is, about an issue like this, that the actual decision depends on which values you put in first place, which in second place, and which in third. No one in the Starbucks salon [3] argued that any of the values under discussion was wrong. All the discussion had to do with whether the personal relationship (long time customer) was so important that the proprietor shouldn’t pay for his own mistakes. Or would we all be better off just if we just waived such considerations as we are able and treat service providers mostly just as people?

As usual. I can see all the sides. I can argue all the sides myself. But no abilities I might have would make a discussion of that kind possible—much less “likely,” and at our Starbucks, in our corner, such discussions really are likely. And the two rules we really do attend to consistently—no proselytizing, no flame throwing—help to preserve the space in which such discussions can happen when they are ready to happen. [4]

[1]  Just how it is that “regular events” get to be treated as “structures” was the happiest thought I had in all of 1973. It cleared the way for me to write my dissertation at the University of Oregon.
[2] I did see him in action once. Several years ago, I was named to a church committee which was made up, without anyone actually admitting it, of the prominent opponents in a recent conflict. Bob didn’t know anything about the conflict and didn’t need to. I brought him in to talk to us about what kinds of things move “reconciliation” forward. His guidance was one of the best things that ever happened in that committee.
[3] I’ve been waiting for a chance to use that word. Here is the historical basis of my reference, courtesy of Wikipedia.

“Their base was the Parisian salons, where networks of social and intellectual exchange were developed to connect Paris, the capital of the Enlightenment and the City of Light, with the rest of France.”

That’s us—bringing light and life to all of Southwest Portland.

[4]  I wanted to end with this picture of Ian MacKellen playing Gandalf the Wizard from The Lord of the Rings.  First, it is a marvelous phrasing of the idea.  Second, Bob has a son named Gandalf and I wanted you to be sure that the quote came from the book, not from the family dinner table.