Since this is the second of a proposed three-essay set, I am bound to a certain extent by the promises I made in the first essay. I suggested some divisions in using the word “authoritarian,” so that I could say that Donald Trump may not be “authoritarian” and that only some of his followers are. I promised that I would return to look at those followers and here I am.

I would like to begin, however, with a consideration of the uses of language, especially political language. When a word is used exclusively for its effect in tarring other people, we lose the meaning of the word. That seems like a high price to pay.

No one remembers that “a villain” lives in “a villa” or that “a heathen” lives out in the “heath” and those are not the primary meanings anymore. We have shrunk the perfectly usable expression “invidious discrimination” down to just “discrimination” and made it a word that is always bad. (Oddly, “discriminating” still has some positive uses.) We have taken all the life out of “hero” by insisting that everyone is a hero, each in his or own way, of course. “Language” is now a reason for being wary of a movie. It has an R because of “language.” [1]

When we deny that authoritarian has an actual meaning, we are doing the same to that word and we really need that word.  I mean we need for it to mean something, especially this year. And if it is only a snarl, it does not, really, mean anything.  Trump voters are said, for instance, to be “authoritarian.” In the previous post in this series, I distinguished between “external” or situational or instrumental authoritarians and what I call “real ones.” You can think that some time is just the right time for a strong, strict, even bellicose leader and not “be” authoritarian. It is not who you are; it is what the times require. 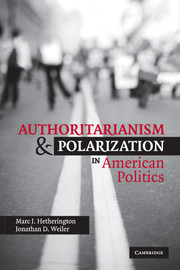 At this point, I would like to introduce Marc Heatherington and Jonathan Weiler as they are represented in their book Authoritarianism and Polarization in American Politics (2009). I’m going to be relying on their recent work for most of the rest of this essay. They use several tests which look very good to academics. The tests are “valid,” i.e., they test what they are supposed to test and they are “reliable,” i.e. they come up with the same findings when a population is retested. So, in general terms,  these are really good measures.

Here’s how they work. They offer a number of questions, usually yes or no questions, and add up the 0’s and 1’s. [2]. That gives us a profile of complete authoritarians and complete nonauthoritarians. These extreme positions are called “ideal types.” It is taken for granted that most of us are somewhere in the middle but by describing the extremes, we can say “in the middle of what?”

One of the reasons I like Heatheringon and Weiler’s approach is that they are committed to describing, rather than condemning. Let me illustrate:

[There is an] extraordinary difference between authoritarians and nonauthoritarians on the question of whether there is a right way and a wrong way to do things. Again, nonauthoritarians’ resistance to making snap judgments is evident here. One could certainly imagine circumstances in which this attribute could be viewed as admirable and others in which it could be deemed an irresponsible failure to hold individuals accountable when circumstances warrant such accountability.

The authors here describe a trait on which extreme authoritarians differ from extreme nonauthoritarians. In this case it is whether there is “a right way and a wrong way to do things.” If I stand here as a nonauthoritarian, I can wail about the rigidity of the other guys. If I stand as an authoritarian, I can wail about the lack of conviction of the other guys. That’s a lot of wailing and what does it get us?  What Heatherington and Weiler do is to say that there are circumstances in which the one value is best and others in which the other value is best.

That’s what I like. “Authoritarian” is a description; it is not a condemnation. On the other hand, there are times when the policies that authoritarians disproportionately support cost all of us dearly. I can be against those policies without raising—without even considering—the question of just why they chose those policies. And that is what the authoritarianism scholarship, beginning with Theodor Adorno, has mostly done up to now. It is not what Heatherington and Weiler do, which is why I am passing their work along to you.

Do you have any friends who are authoritarians?

Of course you do. I do. And I love some of them dearly. In this section, I would like to follow the authors’ descriptions of four traits on which the authoritarians—those out on one end of the distribution—differ from nonauthoritarians (who are, of course, way out on the other end).

Affirmative Action programs are probably the best example here. These choices are likely to pit authoritarians against nonauthoritarians both on: a) what groups are to be given preference and b) on just what is “fair” in the circumstances. Nonauthoritarians favor the outgroups and define “fair” in historical, not in interpersonal, terms.

Authoritarians and Nonauthoritarians differ scarcely at all on the desire for accurate information—until they feel the presence of a threat.

I would be really surprised if these findings were different from the ingroup/outgroup findings and I am relieved to see that they are not. I think we call the preference for “people like ourselves” an “ingroup bias” when we are thinking of domestic affairs and “ethnocentrism” when we are thinking of people of other nations and cultures. In any case, nonauthoritarians show significantly less ethnocentrism than authoritarians do.  This puffin sounds pretty familiar to me. 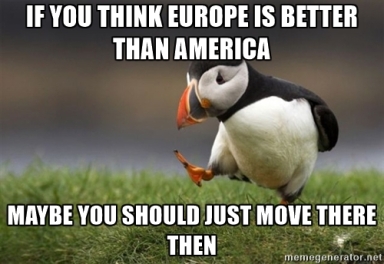 seriously challenge social norms; nonauthoritarians are more likely to think that it is a good thing even when it does. Nonauthoritarians, to say it another way, are willing to put up with a good deal of disorder to protect the autonomy of persons. They don’t feel the same consideration for the “autonomy” of powerful social systems.
So what does all this mean?

It means that there are circumstances in which doing what the authoritarians want is exactly the right thing to do. In the previous post, I argued that when a school superintendent chooses an authoritarian principal for the high school, that does not mean that he is authoritarian: it means that he know what that school needs at the moment.

On the other hand, when: a) preference needs to be given to ingroups and where b) one-sided information sources are adequate and when c) groups representing other nationalities or cultures need to be opposed and when d) claims of personal autonomy need to be set aside so that the social norms are honored—in those times, we just cannot have too many authoritarians.  Lining them all up like this makes me think of Gary Trudeau’s old cartoons of B.D. in the huddle–a setting where authoritarianism is crucially necessary–and finding way too little of it.

My own personal views really don’t fall at either extreme. Like most people I have some of these traits and some of those. Or I honor these values in one situation and those values in another. In other words, I do not fit the “ideal type” that the tests identify. I fit somewhere further toward the middle of the scale.

But by far my most vivid contact with these dilemmas has not come as a person, but as a professor. In my teaching years, I looked out over a classroom full of kids who weren’t sure what their own values were. They knew what they felt, but they weren’t sure they should honor those feelings. And they weren’t sure of the effects would be if the policies they liked best were put into effect.

Those are the right concerns to have, I think. At least, they are the ones that have meant the most to me as a teacher. In the third and final essay (Authoritarianism III) I will try to deal with them.

[1] And I haven’t even touched words like Nazi, which once meant “a member of the National Socialist Party” and can now mean someone who is, from the standpoint of the accuser, “too strict” about something. Anything. I have head of “grammar Nazis.”
[2] 30 questions in the Right-wing Authoritarianism Scale, 4 in the National Election Study authoritarianism index, 17 in the Social Conformity-Autonomy Scale.