I have begun to arouse a little opposition among by beloved Bookies.[1] It’s not the puns this time. They drew the line at three puns per book group meeting and I have stayed well short of the line. Usually.

This is something else. I know for a fact that I am not the only member who enjoys reading books over and over. I am the only one who really defends the practice, however, and I think that’s what gets me in trouble.

Since I began this essay, there has been a discussion of the whole matter at our annual meeting at the Oregon coast, so at the end of my argument, I will tack on a few things I heard from them this year. 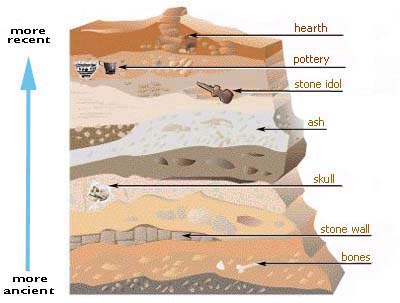 I have a picture of an archaeological site here. I am going to use it to illustrate what I mean by “depth.” By “breadth,” I will mean many such sites. As you see, this site has a lot of different levels. In this standard picture, each level is older than the one above it. As I read a book, I sift through all the material I am able to reach and when I am finished, level one is gone and all its valuable artifacts bagged and tagged.

When I come back, I do the same thing again, but now it is level two that is open to my inspection, so I see things I was not able to see before. When I am done with that reading, I carefully catalogue and store (“bag and tag” is just crime-scene-speak) the artifacts (evidence) and go away. When I come back, level three is right there waiting for me. I discovered whatever I could about the use of the hearth in the first “reading;” about pottery in the second; and something, at least, about their religious practices in the third.

When I was younger, I used to say about a very rich book that I had read once, “Oh yeah, I read that.” And I had. I had mastered everything I could get to on a first reading and that is all I knew about. I don’t say that about rich books anymore.

The Lathe of Heaven

Perhaps an example would help. One of my favorite books of any kind is Ursula LeGuin’s The Lathe of Heaven. [2] The plot is complicated because George Orr has dreams that change the world. And they change the world retroactively, so that this “new event,” which he just dreamed into existence, seems to everyone else to have happened a long time ago. It took all the effort I could bring to the book to hang onto those realities and to continue to wish George well through them all.

It was at perhaps the fifth reading—the level of the skull in the archaeological site— that I discovered what LeGuin surely intended to be the central axis of the story. Dr. Haber, the therapist, is the bad guy. [3] He believes in changing the world to make it better and once he discovers that George, his patient, can dream new worlds into reality, he uses George relentlessly. George floats in the world in a completely engaged way that looks like pathological passivity to Haber, but is LeGuin’s moral stance in this book. Being “one with the world” is right; “changing the world to make it better” is wrong.

In this picture, we see the result of Haber’s suggestion that the world not be divided into warring groups by the color of their skin. George dreamed that everyone was gray and when he woke up, they all were—including Dr. Haber.  I’m sure that seemed a good solution to a dreaming mind, however far from Haber’s mind it was.  When George was instructed to bring “peace on earth,” he invented  aliens and had them invade Earth.  Problem solved.

The way the depth v. breadth issue is normally put is “Why would you read the same book over and over when there are so many different (new, other, varied) books to read?” I think it is the form of the question that has caused me the most difficulty over the years. I am committed to a way of grasping the issue that holds depth (many layers down into the site) as one value and breadth, (many such sites) as another. I want a question that puts the value of X up against the value of Y. I would be happy even with a question that went like this: “Surely you don’t think that two layers of depth are worth sacrificing ten additional new sites?!” I might agree that that is a bad tradeoff or I might say that I would gladly trade ten more hearths (yawn!) for just one stone idol (three levels down) or one skull (five levels down).

So there’s my argument. You really have to account for the benefits of depth when you are deciding how much breadth you are willing to sacrifice to get down that far. And that’s where I would have stopped had the Bookies not had a conversation–I was part of it, of course– that dealt with this same issue. But we did. Here are a few of the objections and one support from an unanticipated source.

Objection 1. You talk about “one level” and one reading as if they were the same thing. Don’t you agree that a really good reader might read…oh…the first five levels in one reading?

Response 1. I do agree. The depth v. breadth trade-off is important as a general issue. It is crucially important that both be valued in principle. But the particularities of the trade-off will differ from one person to another. When I talk about “Level 1,” I am talking only about how far down into the site I can get in one reading. I freely grant that others can get further down in one reading.

Objection 2. You keep using the word “superficial” to refer to the reading of first levels. Isn’t there a negative connotation to the word superficial?

Response 2. Sometimes there is. No one rejects “superficial” as a description of wounds. I do like superficial as the adjective form of the noun surface. The central meaning of the word is exactly what I mean. I think I will be content to allow some people to emphasize the peripheral meanings of the word, which are negative in some settings, if they want to. There is a limit to how much trouble I am willing to get into by doing it, but so far, I think I am still willing.

Objection 3. There are so many really wonderful new books. Are you really willing to pass them up so that you can read the old books at a level you call “deep?”

Response 3. I certainly don’t want to give up on new books. My goal is only to strike a balance for myself. A superficial treatment of these new ones is a positive good all by itself. Even if it isn’t a good book, it can provide a new and interesting look at the world. And if it is a good book, reading it once is a necessary preparation for reading it a second time—you know, down where the pottery can be seen

Support 1: All this talk about novelty and meaning! What about reading an old familiar book the same way we eat comfort food? There are books we re-read just to live in that world again for a little while.

Response 1: Yup. That’s another good reason for reading that kind of book over and over.

[1] I write about the Bookies quite a bit, but when you post a blog, you never know who is going to read it, so let me add a note here. In 1983, my wife, Marilyn, and I and two other couples started a book group. We joined so we could read and discuss books, but over the intervening 35 years, we have become friends, and I have come to call them “the Bookies.” There are 12 of us now; five couples and two singles.
[2] Also two movies by that name. The first a low-budget experiment that I didn’t care for very much, although I did get to hear her narrate it. The second a Hollywood-ish version that departed somewhat from the book, but that added a really engaging visual dimension, and also gave us James Caan as Dr. Haber and Lucas Haas as George.
[3] Haber’s name is built transparently on the Latin verb habere, which means “to have, to hold onto.”