See it for yourself

There is a moment in the new Sally Fields movie, Hello, My Name is Doris, that catches 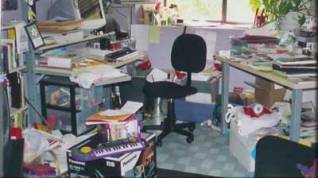 everything I want to say about the movie. This picture gives you a feeling for what Doris’s house looks like. The audience sees it. Her brother Todd, who wants to sell the house, sees it. The therapist whom the brother engages to help Doris through the process of de-cluttering, sees it. But Doris doesn’t see it.

Until one moment, very near the end of the story.  It’s a very powerful moment if you are willing to care about Doris, and by this time I did.  This is the moment you want to see.  It’s the best moment in the whole movie.

Of course, you won’t understand the moment unless you see the rest of the movie and seeing the rest of the movie was really hard for me. There is a kind of “comedy” that plays to people who think that watching people humiliate themselves on screen is really funny. I don’t have any criticism of that notion; I just don’t hold it myself. When the characters in the story cringe, I cringe. And there is a lot of cringing to be done in this movie in which nearly 70 year old spinster Doris Miller (Sally Field) has a hopeless and embarrassing infatuation with John Fremont (Max Greenfield), who is 35 years old and handsome.

I will need to say just a little about how she goes about pursuing him, but it’s really the house I care about. Doris establishes a Facebook account so that Fremont will “friend her.” Facebook is a whole new thing to Doris. She has no idea how it can be honestly used, let along how it can be dishonestly used, which is what her 13 year old friend Vivian has in mind. Vivian invents a new persona for her and chooses a picture that looks nothing like Doris to dress the page up. It’s a really dumb thing to do and it turns out badly, but—and you hardly notice this on the way by—it is doing something.

Once she has access to Fremont’s Facebook page (because he friended her), she rummages through his profile and learns a lot about him. He is a big fan of a very far out music group, for instance. So Doris goes out and buys some of this music and listens to it and leaves the CD case on her desk at work where Fremont will see it. Doris has never heard music like this and if it weren’t for her hopeless project, she probably wouldn’t like it. But she wants to look like she is accustomed to it, so she practices moving with the music a little. If you look at all this as part of her pursuit of an attractive co-worker half her age, it is all bad, but it you look at it as a lot of doing by a woman who is not used to doing things, it is all good.

It turns out the Fremont has a girlfriend, and, as silly as it seems, Doris is shocked by it all. Fremont is two-timing her! He is being unfaithful to a romance he doesn’t even know he is having. So Doris sneaks around the city, following them. When they catch her at it—she really isn’t very good—they invite her to join them and they go to a club where the girlfriend is the singer. This is a place Doris would never have thought of going.

It goes on and on. I really think that in the mind of Director, John Tractenberg, this romantic pursuit is what the movie is about. That’s not what it was about for me. While all this is happening, Doris’s brother Todd (Stephen Root) is trying to get Doris to clean all that crap out of the house and put it up for sale.

Doris fights a losing battle in trying to keep the house just the way it is. She refuses to consider Todd’s proposal. When the Todd and the therapist force their way in, Doris begins to give the reasons why this and then that—one ski, for instance— ought to be kept rather than given away. The reasons are even more embarrassing than the clutter, but you have to remember that “the moment” I referred to has not yet occurred. Doris has not yet seen the clutter with her own eyes. Everyone else sees it, but Doris does not.

The pursuit of Fremont ends badly, of course, as it must. Doris is humiliated. She goes home thoroughly depressed and drinks as much wine as she can hold, collapses on the bed and wakes up with a ferocious hangover. But then it happens. In all the silliness of the office “romance,” Doris has become an active person. She has begun to act in what she thinks of—mistakenly—as her own interest. She has done a lot of new things, like the Facebook account, for example, and the far out music concert. She has done things.

All the goals were wrong, but all the things she did pursuing those goals, made her a person she had never been before. It gave her a stable core of regard for herself, as acting on your own behalf tends to do.

And at that point, she looks around and sees for the first time what everyone else has seen all along. She lives in a nightmare of useless things. These things preserve sentimental associations she has never had herself. They keep, for eventual use, things that will never be used. There is not room in the house for her to be the person she now knows she is capable of being.

We see her see that. And then she throws all the clutter away and begins a new life.