“We do not take well to uselessness.”

So says Wendy Lustbader in her superb Counting on Kindness: the Dilemmas of Dependency. She has older people in mind, but I would like to explore the idea today in a somewhat broader context. There is no question in my mind that she is right in what she says, but I wonder if the fact that we take so poorly to it

is as good a thing as she thinks it is.

Let’s take retirement first. [1] A common complaint among American men who have “retired” from their jobs is that they feel useless. [2] That kind of “usefulness” relies on the contribution you make to the company and fuses with it the regard for your work that comes from your colleagues. But it could mean that your retirement from that battlefield frees you to choose another battlefield, one that better serves the forces you still have to commit.

If retirement means only that, that you are now free to choose another engagement with other foes with increased odds of “winning,” then there is no reason whatever that a man retiring from his job would need to run the risk of feeling useless.

Unless, of course: a) doing that particular job is the only reason he values himself, b) there are no other commitments that truly engage him, and c) there are no other colleagues who assess his work and value it when it is good. If he doesn’t have any of those, then “not being at work” is not the problem he thinks it is.  His problems are much deeper than he has suspected.

There is a broader context, however. “Usefulness” is a kind of doing. It is not a kind of being. Is doing really all that matters? Really?  The being/doing distinction can be seen as fundamental, but that’s not the way I am thinking of it here. Anyone who engages himself or herself completely in a world (of experience) or in a task, does not rely on the activity, and may scarcely be aware of it.

Mihaly Czickszentmihaly describes the experience as “flow.” [3] When you are in a state of flow, the world goes away. The conversation you are having becomes vivid and all the rest of the world, pallid; the picture you are painting and its possibilities, both chosen and rejected, is the whole world of your experience; the concept you have almost but not quite grasped makes up all of “what you are doing” and peripherals like…oh…eating, sleeping, and being somewhere on time, simply recede into the distance.

No one, in a state of flow, wonders whether he or she is being “useful.”

There is a distinction, as well, between “who I am” and “what I do.” It’s not a simple distinction, obviously, but I would like to drop a pin in the map right there so we can find our way back.

Another difficulty that the notion of “uselessness” hands us is, “What do we mean when we say ‘useful’?” Society is a rough and ready kind of enterprise so far as meanings go. Society is possible because “close enough” is the standard for giving and receiving meaning. But every now that then, “good enough” really isn’t good enough and I think this is one. What if, for instance, our common definitions of “useful” are merely conventional? What is these common definitions are not “useful?” What if another notion of “useful,” on being presented, would be welcomed and would benefit us all?

Here’s an example. There was quite a bit of time that elapsed between my wife, Marilyn’s cancer diagnosis and her death. During most of that time, she was disabled by cancer treatments of one kind or another and she understood that her obvious frailties made her a problem for her friends. Marilyn didn’t give up on being “useful” and she didn’t demand that her friends give up on it either.  She did something better than either of those.

She actively pursued a sense of easy exchange with her friends. Her friends wanted to be with her and to console her. Marilyn did all the work that made it possible for them to do that. She actively defined the relationship between herself and her friends so that they would know they were “doing it right;” so they would be at ease from the first and would grow more confident and more effective as they went on.

Everyone looking at that scene would agree that her friends were there to “be useful to her.” And they were. And they would have done the things that she needed had she been self-conscious and spiteful or had she grown weary from the persistent demands for gratitude. But Marilyn’s notion of “usefulness” to her friends enabled her to invite them to do things for her and to receive their efforts with generosity.

So she was at least as “useful” to them as they were to her. More useful, as I saw it. I was dumbfounded. I had never considered the possibility that avoiding “uselessness” could look like that. Obviously, I had never seen it either. I filed it away so that should I ever be in that situation, I will have her strength and generosity as a guide.

When I think of “useful” in the conventional ways, what Marilyn did simply does not come into view. That is one of the reasons that conventional meanings need to be expanded from time to time. So here is an example of a different sort entirely.

I am part of a weekly discussion group where the discussion ebbs and flows. There is one

member of the group who is willing to ask the “Why is grass green?” kind of question. No one knows the answer, but we all think we should so all of us pass the opportunity by and none of us asks it. But this one guy does. He would be very much surprised, I think, to learn that his contribution is “useful” to the group; it is, in fact, much more than useful. It is vital.

If he were to learn the value of what he does so that he could do it on purpose when it is needed, I think he should be designated A National Resource and loaned out, when needed, to groups whose discussions are doing more ebbing and less flowing.

Lustbader is right, I think, to point to the phenomenon of “uselessness,” especially in older adults. And the feeling of “being useless” is a very real feeling for many seniors. But we ought to ask, I think, why we have allowed our notion of what is “useful” to shrink so drastically. Why is “working for a wage” a useful thing to do, but making your home an inviting place for the grandkids or a place of refuge for their parents “not useful?” Why is making shrewd and productive investments in bonds “useful,” but making shrewd and productive investments in friendships, not? [4]

I want to leave you with an image of “retirement” to consider. I have a DVD of the movie The Twilight Zone, which, taken as a whole, is wa-a-a-y too scary for my taste. But there is one episode that features Scatman Crothers as Mr. Bloom. He’s new to this senior center. He apparently doesn’t know how the game is played, because he keeps asking questions that lead the residents to remember who they were and to take pleasure in the memories. 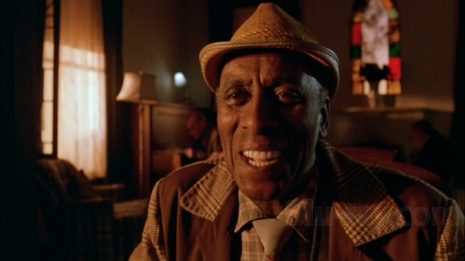 One night, all the residents (except the one holdout) are magically transformed into themselves as children. They run and play and laugh. But before the night is over, they have begun to remember also the wonderful relationships and events of which they were a part and which they will not have any access to unless they go back to their old selves. And Mr. Bloom gives them that. You can go back, he says, to “your old comfortable bodies,” but with “fresh young minds.” The next morning these old people nearly erupt from the senior center, bursting with things to do and places to go that were there all along, but which they had not been willing to contemplate.
Mr. Bloom watches all this activity with satisfaction, then ambles down the walk and along the street where he turns in at the entrance to another senior center—one that looks remarkably like the one he has just left. The residents are sitting or standing in the front yard staring into a meaningless middle distance. Bloom waves his cane in front of the eyes of one old man, provoking not so much as a blink.

“Oh boy,” says Bloom, facing the camera, “this [new assignment] is going to be a tough one.

I tell that story for two reasons. The first is that we see Mr. Bloom “retire,” leave the field, from the first nursing home. This is the only field of action in the movie until the last few seconds.  Why has he done that? Because he is about to begin his campaign at another nursing home. I think “retirement” can mean that.

And then there is the question of Mr. Bloom and “uselessness.” Mr. Bloom is the antithesis of uselessness. And also the antidote.

[1] I have been waiting for some time now for a chance to return that word to its natural home. When an army “retires” from the field, it may be for any number of reasons, most prominent among them is that they want to take up a stronger defensive position elsewhere. Robert E. Lee’s refusal to “retire” from Gettysburg after the first day brought about the disaster of the third day.  For us, it just means that today’s retirement helps to set the table for tomorrow’s victory.
[2] This has not been so common among American women because they much more frequently have additional commitments and they don’t retire from those. That sounds pretty sensible to me.
[3] In his book by that name.
[4] The friendships you invest in don’t need to include you at all. It is perfectly possible to invest in people so that they are drawn to their friendship with each other. Seeing their friendship flourish, you have every reason to “retire” from it and to be pleased with your work.