There is a bright red banner across the glass front of the pastry case at our Starbucks in Multnomah Village. It says, “Tidings of Delicious.”

Every time I see it, I think of Matthew’s strategy for placing the birth of Jesus in a rich 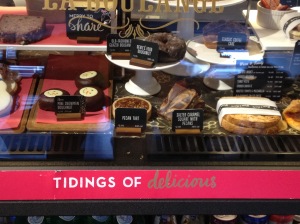 context of Old Testament events that he doesn’t have time to name specifically. There is no reason, after all, for Starbucks to write out, “Fear not: for, behold, I bring you good tidings of great joy, which shall be to all people.” [1] On the other hand, I can’t think of any other common use of “tidings,” so “Tidings of Delicious” might just as well have a scriptural tag on it (see Luke 2: 10).

It’s a word that tunes the ear to a previous setting: a story or a joke or a controversy. It tilts the table of your memory in the direction of “that other thing” without ever mentioning it. [2]

Matthew does it a lot. Some of the instances are plain, right on the surface. Others are hidden to the eyes of ordinary people in our time, but were water cooler conversation in the time when Matthew was written, probably in the mid-80s A.D. Today, I want to play with one of the rich ones.

The door to this reference is almost clear. The problem Jesus had as a little boy is that Herod wanted to kill him. Magi showed up, who knew that a new king of the Jews had been born—Herod’s successor: I’m sure he noted that part—and were led to Joseph’s house in Bethlehem. Joseph escapes to Egypt and comes back when he gets the angelic “All Clear.”

So picture Matthew’s infancy narrative being read aloud to a congregation of Jews and Gentiles, all of whom believe that Jesus of Nazareth was the promised Messiah That belief is why they would be a part of the church for which Matthew adapted his gospel. The Jews who believe in Jesus would hear the words, “For those who sought the life of the child are dead,” (Matthew 2:20) Matthew and they would say, “Those? What do you mean, ‘those?’ It’s just Herod isn’t it?” And then they would catch themselves and say, “Besides…that sounds really familiar. Doesn’t that sound familiar?”

And it does, of course. “Reminds me of something” is the reason Starbucks uses “Tidings of Delicious” and it is the reason Matthew uses this plural—“those” who sought your life are dead” (Exodus 4:19). It reminds people who are hearing the story of Jesus for the first time, of the story of Moses, which they have heard many times. Hm…they say. That happened to Jesus too. Jesus and Moses. Hmmm. [2]

“One of the sacred scribes [Magi] who are very wise in foretelling future events truly, told the king, that about this time there would a child be born to the Israelites, who, if he were reared, would bring the Egyptian dominion low, and would raise the Israelites…Which thing was so feared by the king that, according to this man’s opinion, he commanded that they should cast every male child which was born to the Israelites into the river and destroy it.” [5] 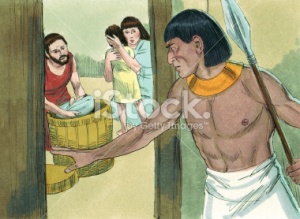 Now it is true that the Magi did not cooperate with Herod. They were warned, in a dream, not to report back as Herod had asked. But Matthew also records that the Magi had told Herod when they had seen the rising of the star—Herod treats this star, remember as The Star of the One Who Is Going To Replace ME—about two years prior. So “the baby Jesus” is at least two years old by this time. [6] That is why Herod orders only male children and only two years old or less to be slaughtered. The information provided my his Magi is the reason the Pharoah decided that all the Israelite babies should be killed at birth so that the birth of the future leader of Israel could be prevented.

Please remember that I am not arguing the historicity of either event. We may find, eventually, some way to verify that they occurred or, less likely, to show that they could not have occurred. I am showing you the background Matthew presumed among his hearers which allowed him to say something to them that escapes us entirely. Jesus and Moses. Moses and Jesus. Anything sound familiar? Tidings of Delicious.

And finally, why Egypt? An angel appears to Joseph—who seems, like his namesake to have been a major league dreamer—and says “Take the child and go to Egypt immediately.” Joseph goes and wakes up his wife and his little boy and takes off immediately.

The case that Matthew wants to make is not only that Jesus is Moses, but also that Jesus is the nation Israel. So Matthew is working toward Hosea 11:1, with says “I called my son out of Egypt,” which he cites in Matthew 2:15b. Matthew has taken a lot of trouble to assure that Jesus is “a son of David” through Joseph and he will he will be quite explicit about Jesus’s identity as Son of God (Matthew 3:17), but adding that Jesus is a “son” in the sense that Israel is a “son” is a little like winning the trifecta for Matthew.

He says “Egypt” so you will start thinking, “Hm…that sounds familiar.” And he says “magi” and Pharoah so he can say Magi and Herod. And he said “a special child will be born” of Moses [6] so he can have the Wise Men say it of Jesus. Matthew knows how this works.

And so does Starbucks, of course, which is why we have “Tidings of Delicious.” [7]

[1] “Which shall be to the whole people,” i.e. all of Israel. The King James Version is being prematurely ecumenical here.
[2] One of my favorites is Roosevelt’s castigation of his wealthy opponents as “malefactors

of great wealth” at a time when the most common use of “malefactors,” possibly the only one anyone had ever heard, was to refer to the criminals who were crucified on each side of Jesus. Roosevelt could have said “those of the wealthy who do evil” and no one would have stirred. My wealthy opponents are like those who were crucified with Jesus—it doesn’t have to be said out loud, you know—is much better, i.e., it is much worse.
[3] Matthew is the gospel writer who begins the story of Jesus’s ministry by having him go up a MOUNTAIN and address his followers about THE MOSAIC COVENANT. It is Matthew who shapes his gospel into five functional units like the five books of Moses—not all scholars agree that that is the best way to account for the structure of Matthew, and, not being a scholar myself, I follow those who make the point I like best.
[4] “And, indeed, Josephus seems to have had much completer [sic] copies of the Pentateuch or other authentic records no lost, about the birth and actions of Moses, than either our Hebrew, Samaritan, or Greek Bibles afford us…”
[5] The Pharoah and his Magi are the “those” in God’s word to Moses, “Those who sought your life are dead.” Not that they were the only ones seeking Moses’s life; he was a fugitive from justice after all. And this accounts for the “those” in Matthew which refers only to Herod. Follow me here. This “those” needs to line up with that “those” in order to get the “Hm…that sounds familiar” hit.
[6] So all those picture of the Wise Men and “the infant Jesus” really ought to be revised. Fat chance.
[6] Remembering that the story of “the special child, Moses” was either in the Penteteuch of the day or was a popular story known in that day. For Matthew’s purpose, it doesn’t really matter which, provided that it begins to turn your mind in the right direction.
[7] And since it is Starbucks, I will forgive them for using an adjective where they really should have used a noun. But if they ever put up a poster where the angelic host proclaims “Tidings of joyful,” I will have to find some other place to get my coffee.